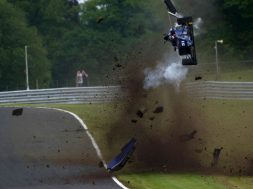 A huge airborne crash involving Carlin’s Ameya Vaidyanathan brought the opening BRDC British Formula 3 race of the weekend at Oulton Park to a halt after just six laps on Saturday (28 May), with Ricky Collard taking the victory and extending his championship lead. Vaidyanathan was taken to the Medical Centre for a precautionary check but was uninjured in the accident; a testament to the strength of the Tatuus-Cosworth. Behind Collard, the podium was completed by Douglas Motorsport’s Thomas Randle and Collard’s Carlin team-mate, Colton Herta.

With the sun beaming down in Cheshire, all 21 drivers took to the International Circuit for the 20-minute qualifying session, aiming to claim a good grid position which is so vital around the narrow and challenging Oulton Park track.


Ricky Collard was the first out of the pit lane and he was to appear at the top of the timing screens throughout, initially posting a 1m31.072s as the drivers began to build temperature into their Pirelli tyres. It didn’t take long before the Hampshire racer put in a lap which would prove unbeatable, blitzing the track in a time of 1m30.360s and opening up a huge gap of 0.740s to his nearest challenger Herta.

The American Herta improved his best time late in the session but could only get to within 0.265s of Collard, and had to settle for a spot on the front-row behind his team-mate. Thomas Randle secured third position on the grid ahead of the impressive Jan Jonck, who posted his best qualifying of the year with fourth. As times threatened to improve with just over two minutes remaining, HHC Motorsport’s Sisa Ngebulana went off at Druids, bringing out the red flags and ending the session.

The sunny conditions continued into the afternoon as the BRDC British Formula 3 cars lined up for race one of the weekend. As the lights went out, it was Randle who made the best start from third, vaulting ahead of Colton Herta for second and challenging Collard for the lead. The Carlin man covered off the Australian and managed to maintain his advantage throughout the rest of the opening lap. Further back, Matheus Leist claimed fourth by overtaking Sean Walkinshaw Racing’s Jan Jonck as Toby Sowery climbed to seventh, having started 10th. Sisa Ngebulana meanwhile jumped from 14th to ninth.


Randle closed up on Collard on lap two but then dropped back again on the next tour, allowing Herta to get on the back of his gearbox. Just 1.2s covered the top-three after five laps, but crucially Collard held an advantage of 0.905s over Randle courtesy of setting the fastest lap of the race; a 1m31.533s. He looked to extend his advantage as the field headed onto lap seven but the race was brought to a halt shortly after owing to Vaidyanathan’s crash.

Coming out of Old Hall Corner Sisa Ngebulana was slow having run wide and Vaidyanathan was able to slip down the inside of the HHC Motorsport driver heading towards Dentons and Cascades. As they took the right-hand kink, contact between Vaidyanathan’s rear left and Ngebulana’s front-right was made, sending the Carlin man into a scary airborne accident. He flipped multiple times before coming to a rest at the bottom of Cascades and the race was immediately red flagged. Medical staff were quickly on the scene to extract Vaidyanathan; he was taken to the Medical Centre as a precaution but released shortly after with no injuries. After the race, Ngebulana was excluded from the results for his part in the incident and handed four penalty points.

Once back in the paddock, Vaidyanathan said: “Ngebulana had a poor exit out of the first corner and we were side-by-side heading into the flat kink heading into Cascades. Unfortunately our wheels touched and after that my view was quite disturbing. I felt quite a few big hits but I have no idea what direction they were in or where they came from.


“I am just very thankful to the people at Tatuus for the strength of the car, the people involved in the championship too and everyone in the team for all their support. Once the accident finished, I was in quite a bit of shock but once that initial traumatic period had subsided then it was all ok.”

Owing to the tight schedule, an attempt was made to restart the race at the end of the day’s action but this was not possible and Ricky Collard was declared the winner with full points. Randle therefore took second with Herta third, ahead of Matheus Leist and Jan Jonck. Enzo Bortoleto took sixth, with Sowery seventh and Enaam Ahmed eighth, the Douglas Motorsport man thus gaining race two pole position. Thomas Maxwell finished ninth for Sean Walkinshaw Racing with Chris Dittmann Racing’s Quinlan Lall completing the top-10.

After the race had been declared, race winner Collard said: “First of all, the main thing is that I’ve got one of my best friends and my team-mate who has come back from a horrible crash. He is a little shaken up but he is well. It is a shame that it is a bit of an anti-climax finish but I am very grateful to the team and all my sponsors. It was a nice win though as we controlled it from the start, although we struggled a bit on the opening couple of laps, which isn’t like me. We were perhaps a little low on the tyre temperatures but by the time the race had settled down, I was able to relax and start to pull away. All in all, it was a dramatic race but it is great to have another win.”

The BRDC British Formula 3 action at Oulton Park resumes on Bank Holiday Monday with race two of the weekend starting at 09:55, with the third and final encounter of the meeting getting underway at 14:05.