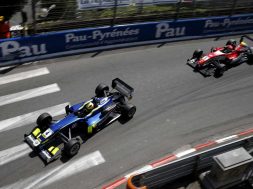 The third race in the FIA Formula 3 European Championship produced a surprise winner: Alessio Lorandi (I) from the Volkswagen customer team Carlin. The 18-year-old youngster won the third race in Pau (F) from pole position. The 2.76-kilometre long race track in southwestern France proved to be challenging for the whole weekend. The first race was affected by bouts of heavy rainfall. Ryan Tveter (USA) and Sérgio Sette Câmara (BR) dealt with this well and were the best-placed Volkswagen drivers, in seventh and eighth positions respectively. The Brazilian driver Câmara also made his mark on the second race. A second-place finish was his best result of the season so far. In a sunny third race, Alessio Lorandi recorded his first-ever Formula 3 victory. “Pole position was important today. I hope this win will be the first of many for me,” said the young Italian driver. The best-placed Volkswagen driver in the drivers’ championship, Joel Eriksson (S) from Team Motopark Racing, finished sixth overall and this result secured the win in the rookie competition. The Swedish driver is now in seventh place in the overall standings with 68 points, and in second place in the rookie championship. The young Formula 3 drivers have no time for rest and relaxation: The next three races will take place this coming weekend (20th – 22nd May) at the Red Bull Ring (A).