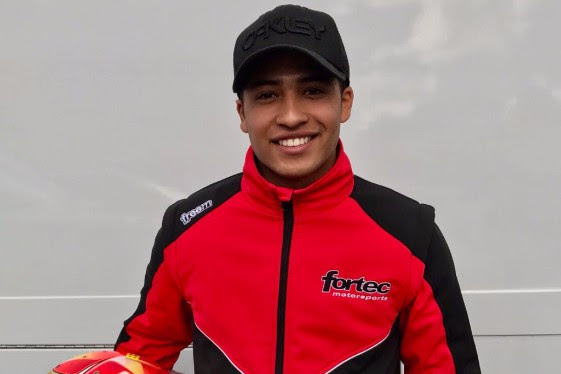 Maldonado, who is managed by Veloce Sports and Rupert Svendsen-Cook, graduates from the Italian Formula 4 Championship in which he competed during the 2016 season. He recently experienced his first taste of the Tatuus-Cosworth British F3 car with Fortec and now joins Brit Ben Hingeley and Dane Nicolai Kjaergaard at the Daventry-based team for the 2017 campaign.

Maldonado’s most recent competitive action came when he drove in the MRF Challenge, scoring multiple top-10 finishes. Prior to his move into single-seaters, he raced in both British and European level karting.

Maldonado said: “It’s a great opportunity for me to have signed with Fortec, I have worked with them in the past and I am very happy to be here. I know that we can develop well together. Now we keep preparing hard for the upcoming season and it’s an honour for me to represent my country Venezuela in a British championship.”

Russ Dixon, Team Manager of Fortec Motorsports’ British F3 squad, commented: “We are very pleased to welcome Manuel to the team for the season ahead, and also to have completed our line-up for 2017 BRDC British F3. Manuel is a talented young driver and we are looking forward to helping him progress throughout the year.”

The 2017 BRDC British Formula 3 season gets underway at Oulton Park on Easter Weekend (April 15-17) with the pre-season Media Day taking place on March 28 at Snetterton, with entry free to the public.