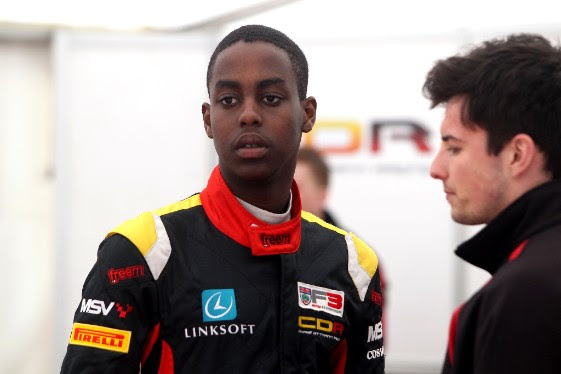 Kenyan driver Jeremy Wahome will return to Chris Dittmann Racing for the 2017 BRDC British Formula 3 season, it has been confirmed today (3 March).

The Nairobi native returns to the UK’s premier single-seater category after a strong rookie year in which he scored a best result of ninth, but was unfortunate not to improve upon that as he displayed great pace in the season finale at Donington Park.

Wahome began his motorsport career in karts aged eight and graduated to single-seaters in the Formula BMW Asia Cup Series. He competed in the Super-Six category and one round of the full Asia Cup at the Sepang International Circuit in Malaysia, claiming three top rookie awards with two runner-up finishes and a third place from five races.

The 18-year-old has moved to the UK to pursue his racing career and schooling commitments, studying at Cheltenham College.

Wahome said: “Racing for Chris Dittmann Racing was great last year, we really gelled together and they taught me a lot. It was a big step up going from karting in Kenya to the European circuits for the first time. It’s a fun environment and we work well. The continuity is good too, that will help us start from where we left off last year. Being so close to where I live means I can use the new simulator when I need to and can visit the factory, at the same time as focusing on my A-levels.”

Chris Dittmann, team principal of Chris Dittmann Racing, commented: “Jeremy showed great pace during last season and could have had some top-six finishes but for some small mistakes. Consistency showed at the end of the season and now it’s matching those two together.”