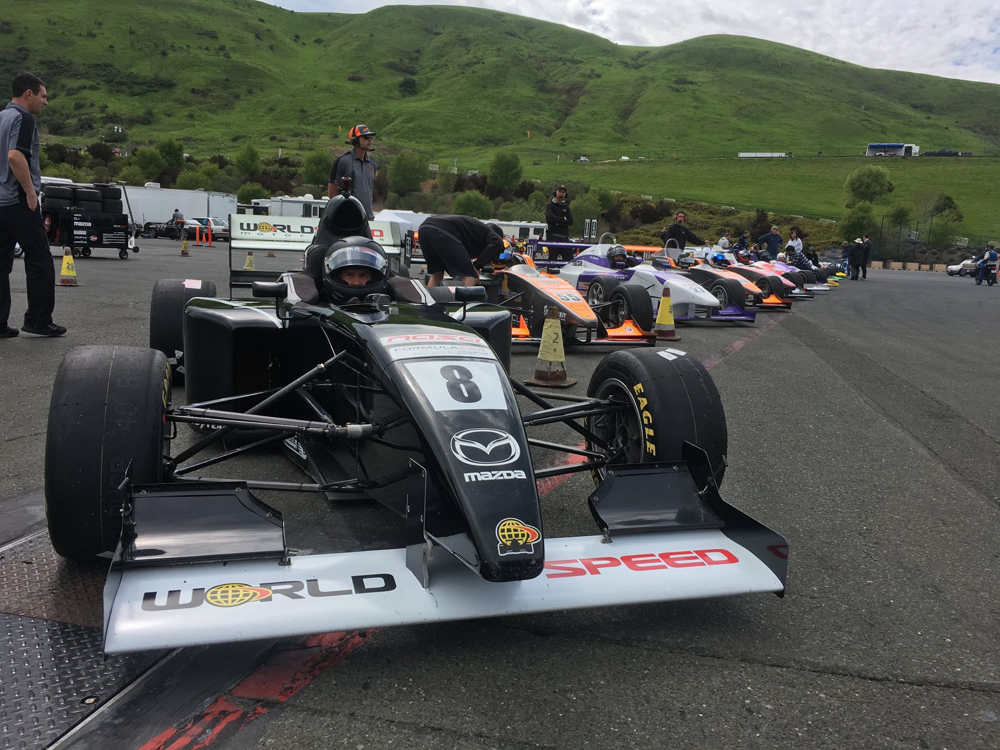 The 2017 Formula Car Challenge presented by Goodyear season opener occurred this past weekend at Sonoma Raceway. The weather was beautiful, with temperatures in the 60s. After a morning test session, the drivers got right down to business.
SATURDAY POLE POSITIONS
When the green flag dropped on race one, 15 cars bolted up into turn two lead by Pro FM driver Stan Kohls. A couple of cars had minor contact, and unfortunately 2016 FM Champion Bill Weaver had to retire soon thereafter. Rookie Colin Mullan who was also involved in the first lap incident, went to the very back of the field but worked his way up to the podium in his very first FCC event. Overall pole position winner Stan Kohls held onto the lead from flag to flag and secured the Pro Formula Mazda win, 2016 FM vice champion Stew Tabak won in FM, and 2016 FS Triple Crown champion Carter Williams won in the FormulaSPEED class.
SATURDAY PODIUM – PRO FM
SATURDAY PODIUM – FORMULA MAZDA
SATURDAY PODIUM – FormulaSPEED
By Sunday most of the drivers had gotten faster, and so had Saturday’s pole winners. Weaver, Williams, and Kohls were again the fastest in their respective classes.
SUNDAY POLE POSITION
Race two got off to a wild start with some mild contact mid pack in turn two. Everyone was able to continue, but a couple of cars did suffer some minor damage. There was a lot of race action as the classes really got mixed up after the incident. With only a couple of laps left in the race the # 89 FM ran off track in the esses and brought out a yellow flag. On the restart, overall race leader Stan Kohls missed a shift causing multiple drivers to stack up. This caused a second yellow flag situation. The race ran out of time and was completed under yellow.
SUNDAY PODIUM – PRO FM
1st Stan Kohls
2nd Jim Mali
3rd George Marcos
SUNDAY PODIUM – FORMULA MAZDA
1st Stew Tabak
2nd William Sturgeon
3rd Woody Yerxa
SUNDAY PODIUM – FormulaSPEED
1st Tao Takaoka
2nd Courtney Crone
3rd Carter Williams
“The weather turned out great, we had a handful of talented new drivers, and there was a ton of great racing and several position changes in both races,” stated Series Official Ben Hettema. “It was a bummer to have to finish race two under yellow, but we run on a time certain schedule. The racers who didn’t get an opportunity to get back up to the front of the pack will have to wait until April at Buttonwillow to get their chance.” At every Formula Car Challenge event series partners provide additional awards to the competitors. Select drivers were awarded complimentary Goodyear Racing tires, and pole sitters were each presented with The Molecule Pole Award. The Molecule Pole Award is given to the fastest qualifier in each class, and includes a selection of Molecule suit care products.
The Formula Car Challenge presented by Goodyear is part of the Mazda Road to Indy USF2000 $200K Scholarship Shootout, which will see the champions of select junior open-wheel and karting series from around the world vie for a scholarship to enter the Cooper Tires USF2000 Championship Powered by Mazda in 2018. The next event for the Formula Car Challenge is April 29th-30th at Buttonwillow Raceway Park.
tags: 2017 formulaspeed George Marcos Stan Kohls standings
previous Atlantic, F2000, F1600 Registrations Trend Up for New Season
next George Russell quickest on Day 1