Home OPEN WHEEL FORMULA 1 The 2015 FIA FORMULA ONE WORLD CHAMPIONSHIP DREW TO A CLOSE UNDER THE LIGHTS OF THE YAS MARINA CIRCUIT IN ABU DHABI TODAY
FORMULA 1
November 30, 2015 David Martin-Janiak 0 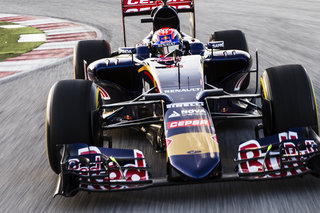 Formula One Infiniti Red Bull Racing finished the season with a double-points haul; Daniel Ricciardo crossing the line in sixth and Daniil Kvyat tenth. Scuderia Toro Rosso featured strongly in the 55-lap race but ultimately finished out of the points with Carlos Sainz 11th and Max Verstappen 12th.* 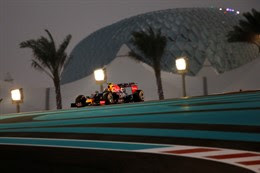 –       Daniel Ricciardo started fifth but lost one position off the start to Hulkenberg. He became one of the first of the front-runners to pit on lap 6 and successfully used the undercut to move back ahead of the Force India. Ricciardo also made his second stop early, which allowed him to move closer to fourth-placed Sergio Perez, but dropped back to sixth as Vettel, who had also used a creative strategy, moved ahead of the Mexican.

–       Daniil Kvyat got away from the line well, but Carlos Sainz had an excellent start and forged ahead of the Red Bull, leaving Kvyat in the clutches of Valtteri Bottas. An early stop gained him track position and he was able to overtake on the newer tyres and move back into the top ten. He got close to Massa in eighth, but was unable to find a way past. A charging Grosjean passed him in the closing stages of the race, pushing the Russian down to tenth.

–       Scuderia Toro Rosso driver Carlos Sainz got a flyer of a start and was up to seventh by the end of the first lap. He lost some time in a pit stop but recovered to be right on the tail of Kvyat for ninth, but Grosjean took him on lap 53 of 55 to demote him to 11th.

–       Max Verstappen had an eventful race. He looked strong in the first part and used his characteristic aggressive moves to get into the top ten, but a three stop strategy and then a five-second penalty for gaining an advantage while overtaking Button cost him positions. The Dutchman finished in 12th position.*

*Classified 16th as a result of post-race penalties

It was a long race today and we tried every tactic to gain position, but ultimately the competition was strong and sixth was the best we could have done. We can take some solace from having four cars see the finish, but it is nevertheless a disappointing way to end a tough season. The final results do not do justice to a phenomenal effort behind the scenes to recover performance and to the spirit we have within the team. Thanks to all at Viry for their continued efforts.

Fourth in the championship for Red Bull is no doubt hard to accept and we all share that responsibility. At Toro Rosso, the championship position may not be as hoped, but with more than double the points of 2014, it’s been a strong year overall for them and we are proud to have worked together to achieve this.

At the end of a very challenging season, both on and off track, I would like to thank everyone at Viry-Châtillon for their hard work. At the start of the year when we came under fire it would have been easy to lose motivation, but all stayed concentrated and kept development on track. We have not reached the targets we set for ourselves, but I hope this year will be seen as an aberration to our usual good form.