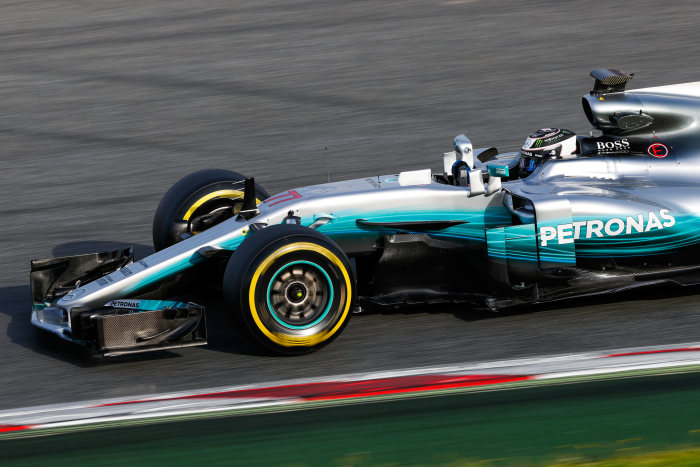 I got in a reasonable amount of laps on my last morning in the car and leave testing feeling confident and ready to race. I feel that as a team we have been able to improve how we work together, that we have a great spirit and real will to win.

It’s been so nice over these past two weeks to see how we operate as a group, both on and off the race track. Thanks to everyone in Brackley and Brixworth for creating this beautiful package. I hope we can extract the maximum from it straight from the word go in Melbourne.

We’ve been testing lots of things, so it’s going to take a long time to analyse everything that we’ve done. I’ve had a massive learning curve over these eight days and that will continue but I can’t wait for the start lights to go out in Melbourne.

It’s been a busy winter for us. I don’t remember how it was last year but this felt like a good couple of weeks. We’re working together better than ever as a team and Valtteri has done great to blend in and do a solid job. We’ve had our up and down days with the car, learnt a lot from that and made plenty of changes. I’m happy with what we’ve gained knowledge-wise and feel confident we got everything we needed from this test to go out and fight in Melbourne.

The others seem quick, so it looks like we have a good battle on our hands. Ferrari have been doing a fantastic job. I think there’s more to come from them but their pace here has really been spectacular. I don’t know if Red Bull had their full package here. Usually they bring that to the first race but they’re definitely still up there and I expect a serious fight with both of those teams. I’ve never wished to dominate. Of course, I want a car that I can go out and fight for a Championship with – but for the fans it’s best when there’s multiple teams fighting for it.

I just heard about John Surtees. To end the day with that kind of news is very sad. He was a legend of the sport – a lovely guy who did so much. It’s a shock to everyone. My thoughts and prayers go out to his family.

tags: 2017 Barcelona Mercedes f1 team
previous Second pre-season test - the latest from the final day in Spain
next Exclusive - Hamilton on tattoos, team mates, and the toughest cars ever