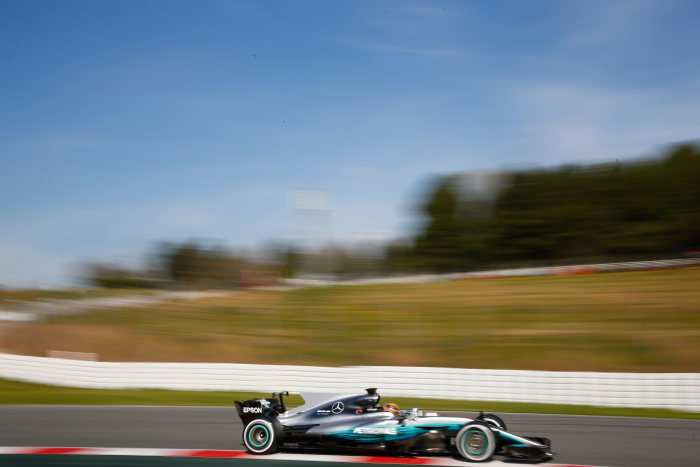 Silver Arrows close in on1,000 lap mark in Barcelona

Mercedes-AMG Petronas Motorsport completed 147 laps – 684 km – of the Circuit de Barcelona-Catalunya on the penultimate day of 2017 pre-season testing in Spain, with Lewis Hamilton and Valtteri Bottas taking turns at the wheel of the F1 W08 EQ Power+

It was good to get some laps in this morning with slightly lower fuel. We worked on balance and made quite a few changes. I learned a lot about the car before handing over to Valtteri. We were trying to simulate something a bit more like qualifying and the car felt good on lower fuel. It’s great to feel it come together.

I think Ferrari are bluffing and that they are a lot quicker than they are showing. They’re very close to us. It’s difficult right now to say exactly who is quicker. But they are very close, if not faster.

Whatever the case, I can’t wait to go out and compete. Just a couple more weeks to go…

It was another strong day for me and the team. I did some good mileage – 95 laps – and some very interesting long run testing this afternoon on the different tyre compounds, as well as set-up work and evaluation of all the parts we’ve got for the car.

We’re still finding out which of these parts are the best suited to our car and how exactly we can draw 100 per cent out of the package. Every day is still a massive learning curve for us and we’v e still got a lot of work to do to get it right.

It’s going to be a tight competition in Melbourne so we need to make the most of our last day of testing tomorrow and maximise our mileage.