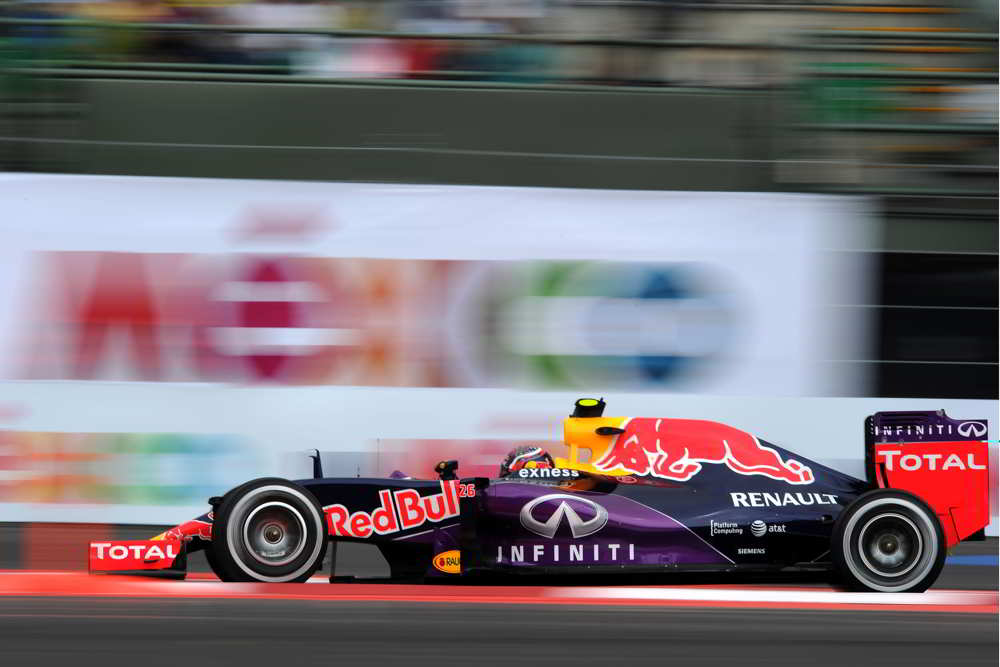 The FIA Formula One World Championship returned to Mexico in spectacular fashion this weekend. The challenging, twisty Autodromo Hermanos Rodriguez was the atmospheric venue for its first visit in over 20 years. Red bull Renault F1 Team looked to perform well at this historique race.

Infiniti Red Bull Racing capped a good weekend with fourth for Daniil Kvyat – just shy of the podium – and fifth for Daniel Ricciardo, while Scuderia Toro Rosso put a third Renault-powered car into the points with ninth overall. Carlos Sainz passed the flag in 13th.

Key race points:
– Infiniti Red Bull Racing started the race with Kvyat fourth and Ricciardo fifth, but Kvyat immediately gained one position off the line. He remained in third, comfortably ahead of both Williams, until the safety car period on lap 52. He lost a podium slot to Bottas on the restart.
– Daniel Ricciardo also gained a position at the start, moving to fourth. He dropped behind the two Williams after making a later pit stop but overtook Massa on track on lap 51.
– Max Verstappen comfortably ran in the top ten for the race, jostling for position with the Force Indias. He eventually lost one place to local hero Sergio Perez and finished in ninth, his fifth consecutive points’ scoring position.
– Carlos Sainz undercut Sergio Perez for tenth in the first part of the race, but unfortunately lost the position when he slid wide on lap 34. He lost two positions to the Lotus drivers under the safety car and then one further spot to Ericsson to eventually finish in 13th.

Rémi Taffin, Director of Operations:
As a new race on the calendar this year, Mexico was a relatively unknown quantity, but one we expected to present very particular challenges. The altitude alone can cause issues with the mechanical internals and then the cooling, but the power units were used extremely well within these limits, with no reliability problems and a consistent performance, as planned. We were able to fight the Williams all the way with both Red Bull drivers, and the Toro Rosso boys were also strong in the midfield. It’s always good to see the hard work from the factory transformed into a solid race. We are now looking forward to Brazil where we hope to be able to make another step with our new power unit upgrade.

Cyril Abiteboul, Managing Director:
We have maintained the performance level we have seen in the last few races and Red Bull were comfortably able to fight for the podium, this time with the Mercedes-engined Williams’ cars in a straight fight. We should also be pleased that our reliability has been impeccable once more, which is no mean feat in the challenging high-altitude conditions of Mexico. We’ve got two more races left this year and we’ve got to aim for the podium each time out.