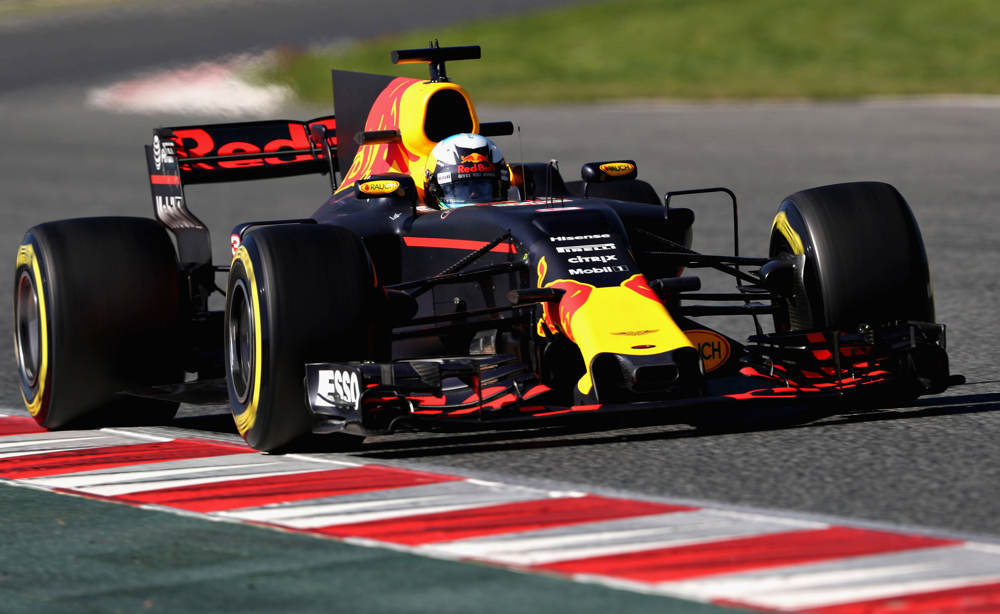 Formula One’s second and final test of pre-season got underway today in Barcelona, with Daniel Ricciardo returning to the cockpit of the RB13. And it was a productive day for the team, with the Australian putting 89 laps on the board and recording the day’s second quickest time. Daniel’s lap of 1:19.900 was set just before the lunch break on ultrasoft tyres as the team spent the morning focusing on shorter runs before longer stints in the afternoon.


“I felt we performed well on the softs this morning and we did quite a few good runs on that. We were also able to start doing some performance runs today. We tried the softer compounds and while my best time was on the ultrasoft it was actually not much quicker than the soft. I think we learned something from that. Generally I’m happy with what we got out of this morning and in terms of where we were last week I feel like the car is starting to come alive more. This afternoon we focused more on longer runs. We only got a few in, but it was enough to know how the tyres work after a few laps. We definitely feel we can still get more out of the car – I think everyone can – but it’s looking alright. It’s now my third day in the car and from day one to day two and now day three, I’m more and more happy with it.”

Head of Race Engineering Guillaume Rocquelin said: “I’d call that a very productive day’s work. In fact, it was pretty much working through the kind of programme we’d normally run on a Friday of a race weekend – so, shorter runs in the morning to focus on working with tyre compounds and then longer runs in the afternoon. Without the benefit of a shakedown before putting the car on track last week we were slightly at the mercy of whatever niggles presented themselves, and a couple did, but over the weekend we put some permanent fixes in place and that enabled us to have a really solid day today. Daniel went wide a couple of times – I think he was enjoying himself – so we had a few bits and pieces that needed repairing before the afternoon runs but they were purely cosmetic, so not a major issue. In terms of the times, they’re still not of great importance, but I’d say we may have slightly underperformed on the softer compounds, so there’s more to come I think.”