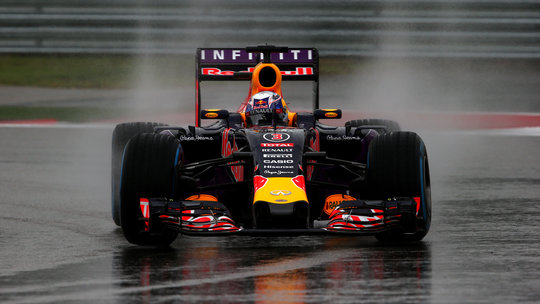 Le Circuit of the Americas was the venue for one of the most exciting races in recent memory today. A drying track gave rise to multiple battles up and down the field, including at the very sharp end.

Infiniti Red Bull Racing traded the lead with Mercedes on several occasions in the first part of the race, with both Daniel Ricciardo and Daniil Kvyat heading the field.

Ultimately, however, it was Scuderia Toro Rosso’s Max Verstappen who secured the highest-placed finish for Renault power in fourth position.

Carlos Sainz was an impressive seventh after starting from the rear of the grid, while Daniel Ricciardo came home in tenth.

Infiniti Red Bull Racing battled for the lead in the first part of the race. Daniil Kvyat muscled into second at the start, with Daniel Ricciardo third. A battle with the two Mercedes spanned the two virtual safety car periods, with all four drivers taking the lead at various points with a range of stunning moves.

As the track dried, the Red Bull duo dropped back down the order and a late stop under the third safety car put them to the tail end of the top ten.

Kvyat went off track on lap 41. The change in grip spun him across the circuit and into the barriers, causing an immediate retirement.
After showing a strong pace in the first part of the race and battling for the lead, Ricciardo dropped down to seventh and into the intense fight for position with both Toro Rossos and McLarens. At one point he lost out to Alonso and then the Sauber of Nasr, but he clawed back to P10 on the last lap with a move on the McLaren.
Max Verstappen stayed in the top ten for the race, swapping positions with the Ferraris, McLarens and his team-mate. He was in P3 in the last third of the race having taken full advantage of the safety car periods to change tyres, but was taken by Sebastian Vettel on newer tyres on lap 47.

Carlos Sainz started from the rear of the grid following an accident in the morning’s qualifying session, but was already in the top ten by lap 8. He was caught in the intense battle for sixth but lost to Button.

Rémi Taffin, Director of Operations:
We had a trouble free weekend with the power units, demonstrating that the choices made here were the right ones. The grid positions were very promising and we enjoyed a very strong first part of the race for both teams. Red Bull was very quick on the intermediate tyres in the wet but struggled to extract full performance out of the dry tyres. Toro Rosso put in a resilient performance with a very good fourth place from Max. Congratulations to Lewis for another title and yet more records.

Cyril Abiteboul, Managing Director:
Today’s USA Grand Prix deserves to be remembered as a classic. We had fights for the lead, battles up and down the top ten, changing conditions and ultimately a World Champion at the end. We would like to extend our congratulations to Lewis for his third title. From our perspective, what’s more important is that we were in those fights, first with the Red Bulls for the lead, and then with Toro Rosso for the podium. Equally critical is the reliability, which was again extremely good all weekend. With three races remaining, we now need to maintain this level until the end.