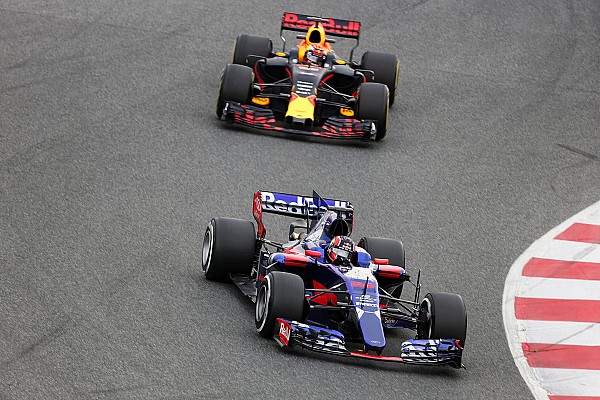 Verstappen has developed a reputation for his overtaking prowess during his two years in F1 so far, pulling off several memorable moves in various race conditions.

Ahead of F1’s move to new-for-2017 regulations, which have increased the cars’ speed and downforce, many suggested the new ruleset would make overtaking more sparse.

While Lewis Hamilton and Felipe Massa made similar predictions after the first day of pre-season testing in Barcelona, Verstappen, who took over from Red Bull teammate Daniel Ricciardo on Tuesday, produced a different account.

“I’ve been quite close to some cars today,” the Dutchman said at the end of his running. “It’s alright. I think it’s the same as last year.

“It’s felt really similar, you know. You have more downforce, you are going a bit faster through corners, so that cancels out a bit.

“I think it should be pretty similar, but we just have to wait and see, hopefully we won’t need to overtake.”

Red Bull’s new RB13 car had a troubled first day of testing, as Daniel Ricciardo stopped on track twice due to engine issues – which the Aussie said were the result of engine provider Renault “playing it safe”.

But while the Austrian team came up short in the mileage department on Monday, it had a much improved showing after Verstappen took over, the Dutchman logging 89 laps.

“In general, on the first day these things can always happen and it was basically, for us, a shakedown,” Verstappen said. “Because we hadn’t run the car before. Today was very positive, we almost did everything we wanted.

“The reliability today was pretty good. We didn’t have any issues. I think it is important to get the mileage first because it is a new engine again – but it’s too early to say where we are with the engine. But, for sure, they made a step and that’s always positive.”

Too early for conclusions

The Dutchman finished the day in third place, 1.2s behind the pacesetting duo of Kimi Raikkonen (Ferrari) and Lewis Hamilton (Mercedes) – but Verstappen insisted it was way too early to draw any conclusions about how competitive the RB13 would be.

Asked about Mercedes managing over 150 laps for a second day straight, he said: “They have done a lot of mileage but again, for us it was a very good day. We have to focus on ourselves and it should be alright.

“Too early to compare to other teams. We do our programme, they do theirs. We’ll see later on.”