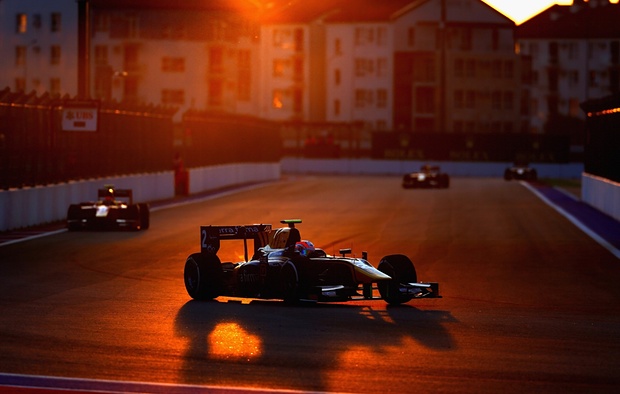 Pierre Gasly saw the flag in second place in the main race, which was sweet revenge for the Frenchman after Monza. His superb performance also helped to cheer up the DAMS team, whose feelings were mitigated by Alex Lynn’s mishap despite his brilliant form all weekend. After starting from pole he dominated the first race until he went off. So even though DAMS bagged the points that went with fifth place and Gasly’s fastest lap in the race plus a magnificent comeback by Lynn in the second heat, it is still in fourth place in the teams’ classification. With two rounds to go till the end of the season, a top-3 finish is still on the cards given the French outfit’s incredible level of performance.

Free practice: P5 for Alex and P6 for Pierre.

Qualifying: P1 for Alex and P4 for Pierre.

Main race: The DAMS drivers made superb starts with Lynn shooting into the lead and
Gasly all over Rossi and Pic in the first corner from which he emerged still in fourth place. A
pile-up brought out the safety car on lap 2 followed by the red flag. As it was getting dark
race control decided to reduce the number of laps to 15 instead of 28. This ruined DAMS’
strategy and Gasly’s as well. On the restart Lynn made another blinding getaway and
dominated the race until he hit the tyre wall in corner 14. Rossi inherited the lead and
fought off Gasly’s attacks till the chequered flag.

Sprint race: Gasly drove another great race as he was in maximum attack mode from start
to finish. He got into third briefly until contact with a rumble strip lost him three places. But
he fought back and hassled Marciello and Vandoorne for the final position on the podium.
Lynn started from the back of the grid and again showed he was the quickest man on the
track in GP2 throughout the weekend, even if he took the flag in 10th place.

Pierre Gasly: “Overall, I’m happy with my weekend. I’m delighted to give the team another podium finish as they did a great job. I could certainly have been on the front row, but I was held up. Alex was very strong and I’ve no reason to be disappointed with my second place behind Rossi after starting fourth. The second heat was also a pretty exciting one with the battle till the end and the fastest lap in the race. It’s good to have scored another big haul of points and I’m determined to do better in Bahrain.”

Alex Lynn: “I said at Monza that we missed an opportunity and I think I stuttered today! Seriously, though, the weekend started off like a dream with pole position and the early stages of the race with a great car. But just a tiny grain of sand and it all went south. I’m very sorry for the whole team; I made a small mistake that had serious consequences. But there’s a positive side too. Our very high level of performance means that we can aim for victory in the last two rounds. “

François Sicard, Managing Director: “We’re fairly satisfied with our weekend in Russia. The cars were very competitive and the drivers too. I’m very happy for Pierre as his podium helped to make up for his disappointment at Monza. He confirmed that he’s at the top of his game and he really showed his sheer speed. I’m disappointed for Alex as it was obvious that he was a cut above the others this weekend. Now our two rookies, in qualifying in particular, are Vandoorne’s closest rivals and it means that we have high hopes for the end of the season!”