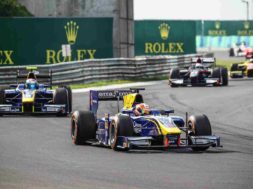 DAMS endured a challenging weekend in the GP2 Series in Hungary (July 22-24) as Alex Lynn and Nicholas Latifi were unable to add to their points totals for the season.

A combination of driver errors in qualifying, unusual track conditions and a pair of multi-car incidents in the races put paid to the multiple championship-winning team’s hopes of a strong weekend.
Aiming to take advantage of a clear track in qualifying, the Le Mans-based team sent both Alex and Nicholas out on their second set of tyres midway through the Friday afternoon session, rather than risk heavy traffic when the track was due to reach peak conditions later on.
Unfortunately, both drivers ran wide at Turn 11 within moments of each other, damaging their tyres and leaving them 11th and 12thon the grid.


Alex, who had been second-fastest in free practice – and Nicholas started the Feature Race on soft tyres, aiming to pit for the more-durable hard Pirellis early on and gain track position as the race wore on. But with no significant degradation experienced, neither man was able to improve significantly and the pair came home 12th and 16th.
Lynn’s Sprint Race lasted just two corners. From 12th on the grid, the Williams Martini Racing Development Driver was hit hard while attempting to avoid a multi-car accident ahead of him and retired on the spot.
Latifi had gone off at the previous corner to avoid another incident, dropping a number of places after a good initial getaway. The Renault Formula One Test Driver made a number of well-judged passing moves during the race to finish 12th.
DAMS lie seventh in the Teams’ Championship while Lynn and Latifi sit 11th and 14th in the drivers’ points table with six of the 11 rounds of the 2016 season done.

The next event takes place at Hockenheim in support of the German Grand Prix on July 29-31.

“It’s not the weekend we wanted, but the positive thing is that we are definitely going in the right direction with the car and the practice laps and split times show that. We’ve had some challenges over the past few weekends, but we have turned a corner and the team spirit and work ethic at DAMS is very high. Come Hockenheim we will be closer to the front. We haven’t got what we deserved this weekend, but we just have to take this on the chin and move forward from it.”


“This weekend should have been much better. Unfortunately, I made a mistake in qualifying, and then in Race One, probably because of the new track surface, there was no tyre degradation – unlike last year – which made it impossible to do something clever with the strategy and gain places. In Race Two I had to go off the track to avoid an accident ahead of me, but I managed to overtake a couple of cars at least. There’s no time to dwell on this as we’ll be at Hockenheim in a few days and confident of better things.”

“Overall our pace was good this weekend, unfortunately we did’nt achieve a good qualifying session. It is a shame because we could have qualified each car high up. From P11 and P12 we had to try a different strategy in Race One, but strangely there was no tyre degradation, so there was no opportunity to move the cars up the order. Race Two was over before it began for Alex, but at least we have proven to ourselves that the pace is there, so if we can just fit all the pieces of the puzzle together at Hockenheim, I know there are some good results to be had.”

0
0   0
previous DAMS still in GP2 title hunt despite tough weekend in Baku
next Racing Engineering and its drivers, Norman Nato and Jordan King, are ready to race in Hockenheim.