DAMS back to winning ways in GP2 at Hockenheim 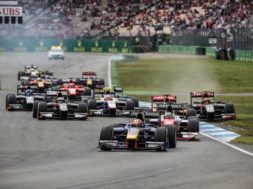 DAMS back to winning ways in GP2 at Hockenheim

DAMS returned to the top step of the podium in the GP2 Series as Alex Lynn triumphed in the Sprint Race at round seven of the 2016 championship at Hockenheim, Germany.

The 22-year-old Briton made a lightning getaway from second place on the grid to move into the lead and was never troubled as he drove to his and DAMS’ second victory of the season.


Lynn had experienced mixed fortunes during Saturday’s Feature Race. After climbing from fifth to third early on, the Williams Martini Racing Development Driver led for more than a third of the race, hoping to make use of clear track to pull out a decisive advantage.

But having started on the harder of the two Pirelli tyre compounds each driver must use, he fell to the lower reaches of the top 10 once he’d made his mandatory pitstop.

An excellent recovery brought him to fifth by the chequered flag, but an unfortunate time penalty; awarded for accidental late-race contact with a rival, dropped him to seventh in the results.


Team-mate Nicholas Latifi started an encouraging seventh for the Feature Race and made some superb early overtaking manoeuvres to climb as high as fifth during the early stages.

But the Canadian lost ground as the performance of his medium-compound rubber dropped off towards the end of his opening stint and he emerged 16th after his compulsory tyre change.

A strong recovery brought him to 12th by the chequered flag and the Renault Sport Formula One Team Test Driver added 17th place in the Sprint Race.


DAMS remain seventh in the Teams’ Championship while Lynn’s results moved him up two places to ninth in the drivers’ standings. Latifi holds 15th position overall.

Four rounds remain in the 2016 series with the next event taking place at the legendary Spa-Francorchamps circuit in support of the Belgian Grand Prix on August 26-28.

“I’ve been really happy with the weekend. It started well with P3 in free practice and some encouraging long runs, and in qualifying I genuinely believe pole position was possible, had I not had the traffic that left me starting P5. Race One should have gone better, but I had some traffic issues and then made a mistake and hit Norman Nato. But it’s encouraging that even with a 10-second penalty for that, we saved P7. In Race Two I made a good start, built a gap so I was out of DRS range from anyone else and then was able to manage my tyres to go on to win.”

“I have mixed feelings from the weekend. On the one hand, qualifying seventh and running in the top five was very good and a sign of the work we’ve put in recently to get ourselves back to where we feel we ought to be. But in the races I suffered quite badly from tyre degradation. I made my pitstop quite early in the Feature Race and that meant it was tough to get the tyres to last the distance. But we’ve once again learned plenty this weekend and we can take that forwards into the final four rounds of the season.”

“This is exactly what the team has needed and deserved after the hard work that’s been put in over recent events. We were able to improve our pace between practice and qualifying and that Alex and Nicholas qualified in the bottom half of the top 10 was down to bad luck rather than a lack of performance. Alex was very sensible with his tyres in both races, knew when to push them and when to manage them, and was rewarded with a fantastic win in the Sprint Race. We still have work to do to make sure we can continue and increase this level of performance, but we have a solid team and we should achieve this.”

0
0   0
previous Racing Engineering and its drivers, Norman Nato and Jordan King, are ready to race in Hockenheim.
next Rowland leads the way on Day 2