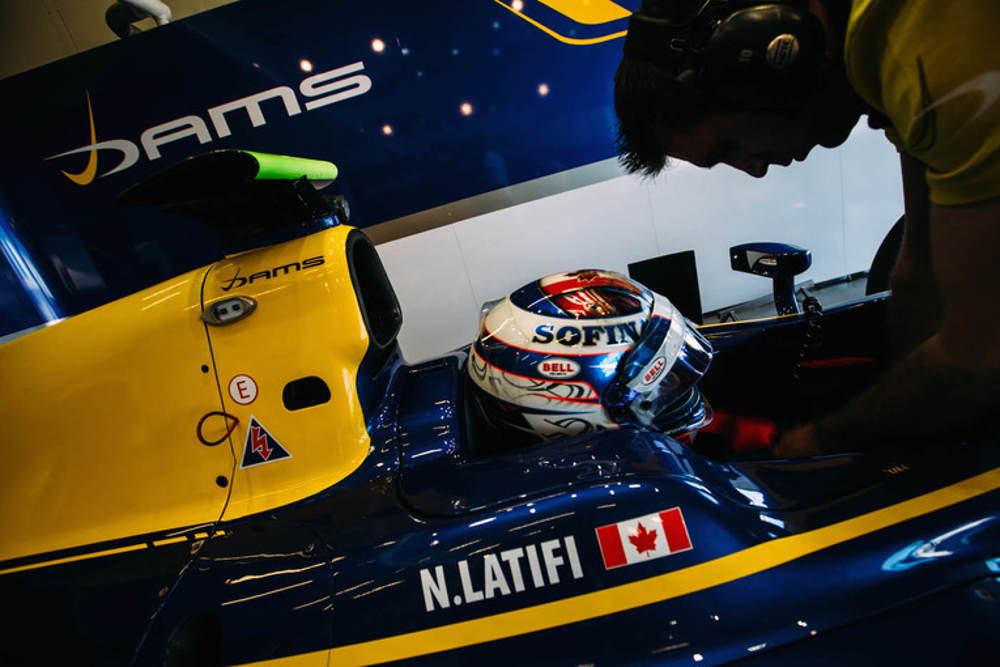 DAMS remain in the hunt for the GP2 Series Drivers’ and Teams’ championships, despite a challenging weekend for Alex Lynn and Nicholas Latifi on their maiden visit to the Baku Street Circuit in Azerbaijan.

Lynn and Latifi were unfortunate victims of circumstance in qualifying. Both were on laps certain to give them top-six grid spots, but as they drove down the flat-out 1.8km run to the end of the lap a yellow flag came out elsewhere, which automatically neutralised the use of the Drag Reduction System (DRS).
This set the tone for both drivers’ weekend, costing them vital straight-line speed – which was likely to have been worth half a second – and any hopes of qualifying near the front.

From 13th and 14th on the Feature Race grid, British racer Lynn and Canadian GP2 rookie Latifi were both unlucky to be eliminated in a multi-car, first-corner collision, despite their best efforts to avoid contact.
With the Sprint Race grid positions being set by the Feature Race results, Latifi and Lynn started 20th and 21st with nothing to lose.
Both kept cool heads during an incident-filled race and carefully picked off their opponents one-by-one as several safety-car periods punctuated the action.
Williams Martini Racing Development Driver Lynn, already a race winner this year, climbed to ninth by the chequered flag, missing out on a points finish by just 1.5 seconds. Latifi also made considerable progress throughout the race to finish 13th.

Lynn holds sixth place in the Drivers’ championship, but is only 13 points off the lead with 25 available for a Feature Race victory. Latifi sits in 13th place in the standings while DAMS lie fifth in the Teams’ title race.

Alex Lynn, DNF/9th: “This weekend has been a real shame for us as a team as we didn’t achieve the results we’d hoped for. We need to swiftly bounce back from this as we have a crucial month coming up with four rounds in quick succession, but DAMS is an incredibly strong team and I’m sure that if everything goes to plan, we should be able to amass a very good set of results in the upcoming races.”

Nicholas Latifi, DNF/13th: “This has not been a good event for the team in terms of results, and it’s especially disappointing when you look at the pace we showed in practice and qualifying. We were very unlucky that our best laps came just as the DRS was deactivated for everyone and that meant we couldn’t show our true performance. After that we were always on the back foot, and having not made it past Turn 1 in the Feature Race, we had no data to judge how to run the Sprint Race. We’ll now move on to circuits we know and there’s no reason why we can’t be very strong.”

François Sicard, DAMS Managing Director: “We’ve been incredibly unlucky this weekend. Losing DRS in qualifying at the worst possible moment cost both Alex and Nicholas good lap times and probably top-six spots on the grid. From there we were very unlucky to have both of them eliminated at the beginning of the Feature Race and then starting from the back of the Sprint as a result. These are, however, very unusual circumstances. We will move on from this result quickly though and focus all our efforts on bouncing back strongly at the Red Bull Ring next time out.“