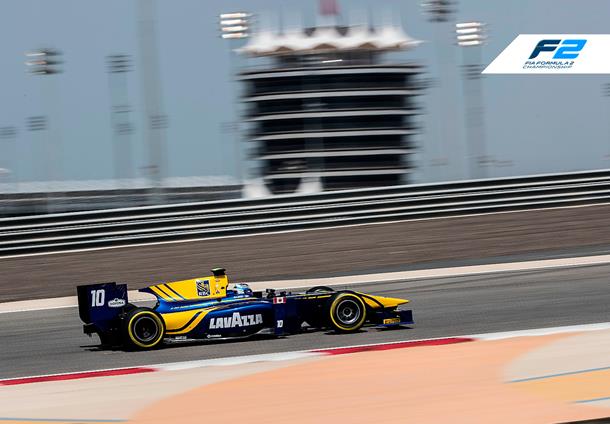 Nicholas Latifi has claimed the honours in this morning’s test session at the Bahrain International Circuit, setting the pace on the second day with a lap of 1:40.541 in the second half of the session to top the timesheets ahead of RUSSIAN TIME teammates Luca Ghiotto and Artem Markelov.

The session opened under gloriously sunny conditions, with the drivers heading out on their medium Pirelli compounds as soon as the lights went green. Johnny Cecotto set the early pace, stopping the clock at 1:41.371, four tenths faster than teammate Nyck de Vries, before a red flag at the 15 minute mark to retrieve Nabil Jeffri at turn 13 halted the proceedings.

At the restart of the session Markelov hit his pace, going top with a 1:41.150 time, just 6 thousands quicker than Oliver Rowland, but Ghiotto first the man to break the 1:41 barrier, followed soon after by Leclerc and Nato.

At the 1st hour mark Markelov and King improved to P2 and P3 respectively, but there was more to come: at 1h40 Latifi grabbed P1 with his blistering lap, a tenth quicker than Ghiotto, and his rivals were unable to challenge. In the final hour a number of drivers tried different set ups to grab the top spot, but to no avail: Latifi owned the morning session when the chequered flag was shown.

The teams and drivers will have a two hour break before resuming hostilities in this afternoon’s session.