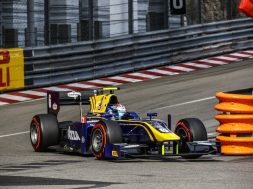 Alex Lynn enhanced his title credentials in the 2016 GP2 Series with a brace of top five finishes in Monaco this weekend (May 26-28), but DAMS team-mate Nicholas Latifi found himself out of luck around the glamorous principality’s unforgiving streets.
On the pace from the outset, Lynn qualified sixth on the 22-strong grid for Friday’s Feature Race in the Formula 1 feeder series. Beginning on Pirelli’s soft-compound rubber, the Williams Martini Racing Development Driver soon latched onto the back of the leading train.
Settling into a consistently quick rhythm, when the pole-sitter hit the wall on lap 24, Lynn found himself embroiled in a three-way tussle over the final spot on the podium and by the time he made his mandatory pit visit, the 22-year-old Briton was up to fourth.
After his switch to the super-soft rubber, Lynn did not lose any places and in a dramatic contest interrupted by accidents and Virtual Safety Car interventions, the Essex-ba sed GP2 sophomore kept his composure to take the chequered flag fourth.
From fifth on the grid in Saturday’s Sprint Race, Lynn again produced a mature performance, artfully responding to sustained pressure from the previous day’s three podium-finishersto secure a double top five result.

Latifi, by contrast, endured a luckless weekend on his Monte-Carlo GP2 debut. After qualifying ninth, the Renault F1 Test Driver advanced to eighth in the Feature Race when the super-soft-shod competitors began their pit-stops, but as he ran side-by-side with eventual winner Artem Markelov through the tunnel just after half-distance, he drifted slightly off-line and clipped the wall, consigning him to retirement with suspension damage.
That disappointment was a double blow as it meant the 20-year-old Canadian would begin the Sprint outing from last on the grid. He had moved up to 18th when gearbox woes spelt another early bath.

Leaving Monaco, Lynn s its third in the drivers’ standings, having closed to eight points adrift of the top of the table, with Latifi eighth. Le Mans-based DAMS remain well in touch in the teams’ classification in third, ahead of the next stop on the calendar in Baku on June 17-19.

Alex Lynn (P4/P5) said: “The key to a good weekend is starting with a strong baseline and right from the first lap in Monaco, the car gave me a lot of confidence. We went into qualifying with high expectations, but in a difficult group, we were unfortunately on the wrong end of a tenth-of-a-second. Nevertheless, we picked the right strategy for the Feature Race and finishing fourth when a few of our major rivals didn’t score was very important for the championship. The goal for race two was consolidation, and that’s what we achieved. We weren’t as fast as we would have liked to be, but there’s a long way to go yet so we’ll happily take the 19 points and move on to Baku in the thick of the title battle.”

Nicholas Latifi (DNF/DNF) said: “Obviously the weekend didn’t turn out the way I wanted. We began quite positively in practice – I gained in confidence and it gave me some references for qualifying. I then made a mistake on my quick lap, so I should probably have been starting a little bit higher. In Friday’s race, I struggled for pace and made another mistake while trying to defend my position and from the back of the grid in the Sprint, I simply wanted to gain as much experience as possible and move forward if I could. Unfortunately, the gearbox problem prevented me from finishing so we need to just forget this weekend, focus on Baku and try to bounce back strongly there.”

François Sicard, DAMS Managing Director, said: “It’s always difficult to know what to expect in Monaco and whilst we would have liked to do a bit better, I think overall, we can be satisfied with our performance. Alex missed the front row of the grid in qualifying by just a single tenth-of-a-second, and two strong finishes mean he has closed in slightly on the championship lead, which is positive. For Nicholas, it was clearly a tougher weekend. He lacks experience in Monaco but he demonstrated in qualifying that he had the pace and a lot of potential. Unfortunately, he had a double DNF with an accident in race one and gearbox issues in race two. We have already turned our attentions towards Baku – being new for everybody, success there will ultimately come down to who learns and adapts to the circuit most quickly.“