Top-3 finish for DAMS in the teams’ championship 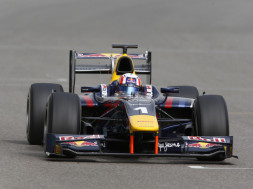 Top-3 finish for DAMS in the teams’ championship

The 2015 GP2 season came to an abrupt and bizarre end as the final sprint race was stopped on the first lap depriving Alex Lynn, who was in the lead at the time, of a possible third victory. The weekend got off to a great start for DAMS as Pierre Gasly scored his third pole position in the last four rounds (five out of six for the French team). But things didn’t work out in the race, which was a carbon copy of Bahrain the previous weekend. We would like to congratulate Stoffel Vandoorne and ART who dominated the championship. DAMS was third in the teams’ classification with seven top-3 finishes including two victories so the team was obliged to cede its titles, but it will be back in 2016 thirsting for revenge!

Qualifying: P1 for Gasly, P4 for Lynn. Gasly set the fastest time on his first flying lap
and improved again to clinch pole.

Main race: Gasly made a good start and took the lead fighting off Vandoorne until third
time round after which Evans also got past the Frenchman. Defending his position led to
tyre degradation and he lost places until his pit stop. Gasly fought his way back in the
closing stages and saw the chequered flag in fifth place. Lynn had a similar race but was
caught out by a virtual safety car period (pit lane closed when he stopped for tyres). He
managed to clinch eighth spot giving him pole position for the following day’s race.

Sprint race: Lynn made a good getaway and took the lead under braking for the first
corner. Gasly made a bad start and was involved in a pile-up two corners further on
and retired. The red flag was hung out and the race abandoned, as it would have taken
too long to repair the protective barriers that were badly damaged in the incident. No
points were awarded.

Pierre Gasly: “It was a frustrating end to the season. Yet again we proved that we had the speed, but we didn’t manage to solve our tyre management problem. On Sunday chaos broke out after my contact with Marciello. Overall, I’ve learned a great deal this season thanks to DAMS who I would like to thank for their amazing work. I really would have liked to have given the team this victory, which we deserved. It took me a while to adapt as I came from a championship in which we used different tyres. But now I feel ready to fight for the title next year.”

Alex Lynn: “It’s such a pity that the championship had to finish like this. We again ran into tyre problems in the main race, but we looked good on Sunday. Overall I’d like to congratulate the DAMS team, which helped me to have a very good first season in GP2 and score two victories that I want to dedicate to them. We worked well together and I improved throughout the year. I can’t wait to get stuck in again and in 2016 I’ll be aiming for the title. “

François Sicard, Managing Director: “The final round, which was cut short, leaves us with a strange feeling. Pierre was uncatchable in qualifying, but he had the same tyre problems in the race as in Bahrain. Alex too, even though he made a great start on Sunday. But overall the season has been a very positive one. In this championship in which experience is primordial, our two rookies put on a great show. Two victories, five top-three finishes and five pole positions bear eloquent testimony to their very high level of performance. They will certainly be title contenders in 2016. Now we’re turning the page very quickly to concentrate on this week’s evaluation tests for next year.”