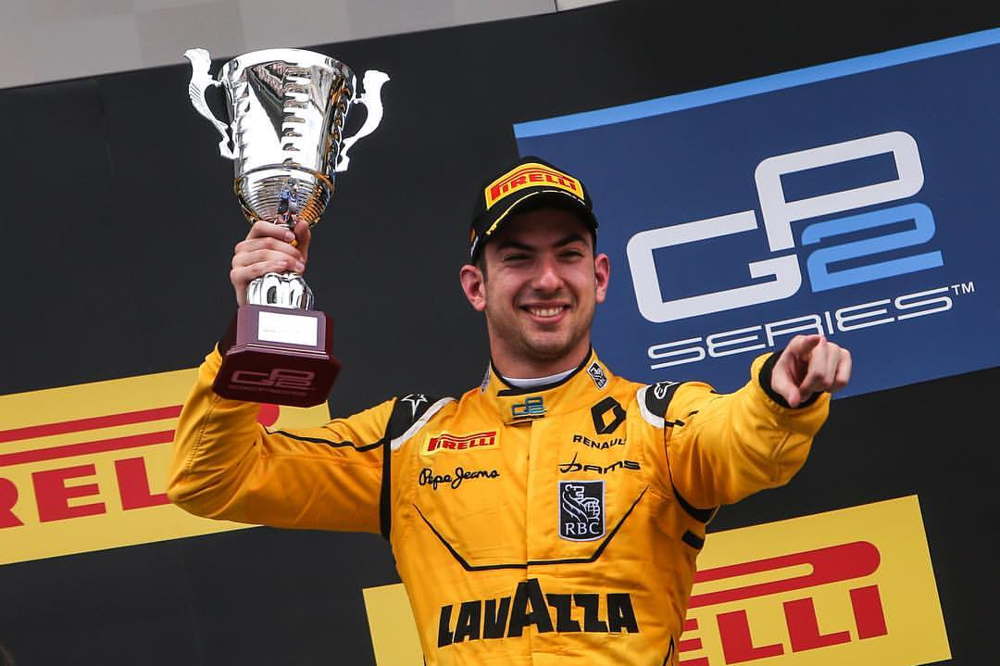 DAMS kicked off the 2016 GP2 Series superbly with victory for Alex Lynn and a maiden podium finish for team newcomer Nicholas Latifi at the Circuit de Barcelona-Catalunya in Spain (May 13-15) to leave the team sitting at the top of the championship table.

Lynn, who is entering his second year in GP2 with DAMS, started the second race of the weekend third and made two superb passing moves to grab the lead within the opening four laps.
The second manoeuvre, a perfectly-judged outbraking attempt into Turn 1, gave the Williams Martini Racing Development Driver an advantage he would not relinquish and he went on to take his third DAMS GP2 victory in a race that ended under safety-car conditions.
The 22-year-old Briton had crossed the line fifth in Saturday‘s opening race after conserving his medium-compound Pirelli tyres during the majority of the race and using the remaining grip to make up a spot on the final lap.
Post-race, however, he was relegated to sixth place after an error by race officials led to the chequered flag being waved a lap early and the events of the crucial 34th lap were nullified.


Renault F1 Test Driver Latifi started the opening race fourth after the best qualifying performance of his short GP2 career and stayed there for the first two-thirds of the race.
He moved into the podium positions just ahead of a safety-car period that threatened to upset the order, but held his nerve and made the most of the soft tyres he’d fitted at his mandatory pitstop to take second place with just two laps to go and take the highest finish by a Canadian in GP2 history.
His seventh place in race two leaves him fourth in the championship, one place and three points behind team-mate Lynn. Le Mans-based DAMS meanwhile share the lead in the teams’ standings.

Alex Lynn (P6/P1) said: “I’m very happy to come away from the opening round of the year with a victory after very good winter testing brought us here with high expectations. Qualifying and race one were pretty messy with variable weather and safety cars coming out at times that didn’t benefit us, so to start third was a good save and to finish sixth was at least some useful points. Being third on the grid for race two made victory possible and it worked out that way thanks to a good start and the hard work by the team over the winter to get the car working so well.”

Nicholas Latifi (P2/P7) said: “I’m really happy to reward the team and myself with a great result in race one and overall I’m really satisfied with the weekend performance. Qualifying was incredibly strong – I really didn’t expect to be able to take fourth on the grid, even though I knew the potential was there from the team and the car. And to finish second is fantastic as it’s my first podium in GP2. Race two was tougher and I struggled a little with the tyres, but when you start seventh on a reversed grid, you just have to be patient and pocket the points. Things look very promising now for the next rounds in Monaco and Baku.”

Francois Sicard, DAMS Managing Director, said: “We are always extremely happy to take two podiums – especially when one of them is a victory – and to be leading the teams’ championship is great news and a credit to the hard work done by everybody within DAMS. We can see just from this weekend that the battle for the drivers’ championship will be very tough this year, but certainly Alex should be a part of that fight. Alex was a little too cautious in qualifying after making a mistake on his first set of tyres, but he did a great job to score good points in sixth and added a superb win in race two. Nicholas also did a brilliant job to get his first podium in what is such a tough series and this will give him the confidence that he can produce this kind of result at other circuits too.“