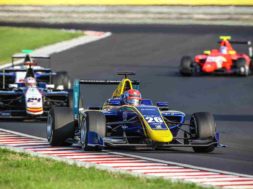 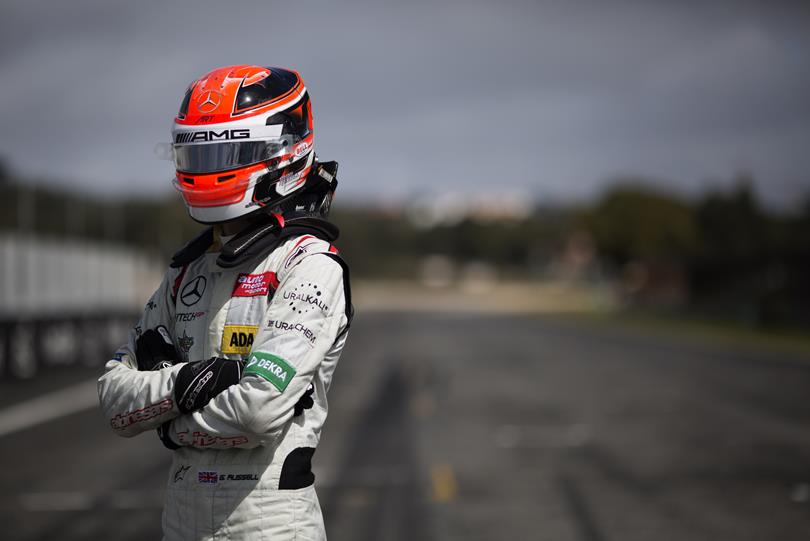 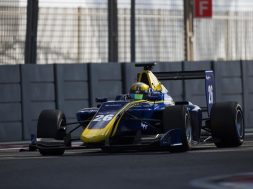 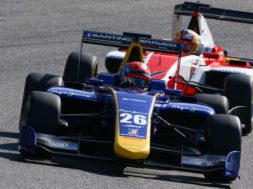 DAMS secured another helping of GP3 Series points, despite a challenging weekend for its trio of drivers in Hungary (July 22-24).

Swiss racer Kevin Joerg was DAMS’ highest-placed finisher over the weekend as he turned 11th place in qualifying into a points-paying 10th spot in Race One; close to an eighth place that would have given him pole position on the partially-reversed Race Two grid.
He gained a further spot on Sunday morning to finish ninth after another mistake-free race.
Santino Ferrucci recovered from qualifying 22nd with a strong opening race. Aided by some effective set-up changes to his car, he climbed to 15th. The American improved further on Sunday morning to finish 11th – setting the fifth-fastest lap of the race as an indication of his speed.
Jake Hughes ran strongly in free practice, but with his car’s set-up not attuned to unexpected track conditions, he qualified 18th. Jake was rammed from behind on the opening lap, damaging his nose against the rear of another car as a result.
An unscheduled pitstop for a replacement left the Briton 23rd at the chequered flag, although he was still able to set the fifth-fastest lap of the race. He finished 19th on Sunday after making up four positions on the opening lap.


DAMS now hold fifth place in the GP3 Teams’ Championship after four of the nine rounds of the Le Mans-based team’s first season in the series. Hughes, Joerg and Ferrucci lie 9th, 14th and 15th in the drivers’ standings.

“It was my first time here so I wasn’t sure quite what to expect. After a difficult qualifying session, we did a lot of work on the set-up ahead of Race One, and it worked as I was able to make up a few places and finish 15th, while also learning quite a lot about the race start and tyre degradation. We made some more changes for Race Two to prepare for Hockenheim next weekend and improved things again; our times were not very far off the race’s best. If we can continue that sort of pace at Hockenheim – a track where passing is much easier, we should have a good weekend.”

“The pace was good in practice – even on our old tyres – so I was hopeful of a good qualifying, but either the track or the weather wasn’t as predicted because the speed just wasn’t there and I qualified 18th. In Race One I made a mistake off the line, but managed to regain the lost places by Turn Six. Then at Turn 7 there was a big concertina ahead of me and I was hit very hard up the rear, which pushed me into the car in front and damaged my nose. So I pitted for a new one and from then I was driving around at the back, even though the pace was quite good. I made a good start to Race Two, with overtaking near-impossible here, I didn’t make any more progress.”


“It was quite a positive weekend for me and much better than the rounds at the Red Bull Ring and Silverstone, although we’re still not quite where we want to be. The pace was good in practice, especially on old tyres, and to qualify 11th – while not as high as I’d have liked – is still an improvement on the past two rounds, so that’s a good step. Both races were mistake-free, which is a very positive thing for me and I scored a point in Race One. I’m definitely looking for more next time at Hockenheim, but it’s something solid to build on.”

“We were confident of a good weekend after going well in practice, but the conditions in qualifying, with unexpected temperatures and the new track surface, meant we weren’t able to extract maximum performance from our tyres. This cost us the chance of some good race results. Our drivers have demonstrated that they are good racers – especially in the last round – but we must take a step forward with our qualifying. Hockenheim, which is just a few days away, would be the ideal place to do this.”