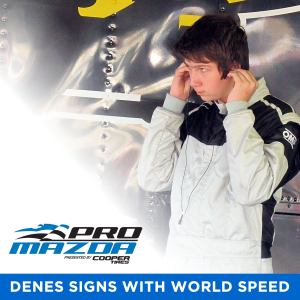 It was announced today that 17 year-old Phillippe Denes will compete in the 2017 Pro Mazda Championship Presented by Cooper Tires with World Speed Motorsports support. This will be Denes’ rookie season on the second step of the Mazda Road to Indy ladder.

“We were so glad to be able to put this together in time for Phillippe to make St. Pete,” noted World Speed Motorsports President Telo Stewart. “Phillippe is a quick study, and while we know that the St. Pete course is a challenging first step, he has proven to us that he excels when presented with a challenge. Phillippe has won in karts and formula cars, and we look forward to providing him with the support he needs to continue his progress on the Mazda Road to Indy.”

Denes began his career racing karts in 2013. He attended Skip Barber Racing school in early 2014, and won his first formula car championship later that season. In 2016 he was signed with Team Pelfrey, and scored 12 podiums in his rookie season of F1600 Championship Series competition.

When he is not racing cars, he still competes in karts with support from Birel-Art North America. When Phillippe is not racing, he attends Connexus Academy to finish his high school studies. Phillippe and the team will be on track four days from now at the Grand Prix of St. Petersburg. Event details, and schedule can be viewed here.

Some of Phillipe’s accomplishments include:

A NOTE FROM PHILLIPE DENES:

I am beyond excited to announce that I will be representing World Speed Motorsports for the 2017 Pro Mazda Championship. Ever since I was three I have dreamed of becoming a professional race car driver, and with joining World Speed Motorsports for this season I am now one step closer to that dream.  After not knowing if I would even be racing this year, all the stress has lifted off my shoulders and I am extremely humbled to have this opportunity.

I have been preparing myself mentally and physically for the season, and although I have not raced for quite some time, I feel I am ready for the challenge. I’m very confident we can win this championship. In 2014, I won the FormulaSPEED National Championship with World Speed Motorsports support. The history and experience of Telo and the WSM team, which includes multiple Pro Mazda titles, proves we can take the fight to the other teams and finish on top this year.

I also have two great teammates this year; Sting-Ray Robb has been a fierce competitor, as well as a great friend of mine throughout the years, and I am very excited to be able to work with him. Also, Bobby Eberle has lots of valuable experience in the Pro Mazda Championship and I can’t wait to work with him as well.