Home OTHER OPEN WHEEL American Will Owen Earns Double Podium Finishes at the Grand Prix of Indianapolis
OTHER OPEN WHEEL
May 21, 2016 David Martin-Janiak 0 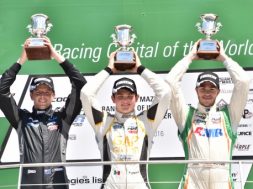 Juncos Racing collected three podium finishes this past weekend in Rounds 5 and 6 of the Pro Mazda Championship Presented by Cooper Tires in the Grand Prix of Indianapolis. Will Owen picked up two of the podiums, while teammate Jake Parsons earned his first podium finish since joining the Mazda Road to Indy series this year.

The third weekend of the 2016 Pro Mazda Championship started off with warm sunny conditions during the two test sessions followed by two practice sessions on the 2.439 mile, 14-Turn road course located at the Indianapolis Motor Speedway. Canadian Garett Grist kicked off the week running second in the first test session. Teammate Will Owen would take the second quickest time in the second practice session followed by Grist in third.


Juncos Racing would go on to qualify side by side for rows two and three of Round 5, with Owen taking the third starting position followed by Jake Parsons in fourth, Grist fifth, and Nicolas Dapero in sixth.

Later that afternoon Round 5 of the Pro Mazda Championship would go green from start to finish in the 40 minute timed race. Owen drove the #23 AMR car to its best finish of the season, taking second. Teammate Parsons picked up his first podium since joining the Mazda Road to Indy series, finishing third. Grist, driver of the #5 Lander Property Management/Mac Tools car, took fourth and rookie Dapero finished eighth.

The final day saw some of the coldest race conditions on record on the road course at the Indianapolis Motor Speedway with temperatures running in the high 40’s. Round 6 would mirror Round 5 going caution free for the entire 40 minute timed race. Owen took home his second podium of the weekend, claiming third and moving him into third in the Pro Mazda Championship standings. Grist took a Top-5 finish finishing fifth. Parsons, driver of the #00 Smart Minds car took sixth. Dapero drove the #31 Federal Seguros car to run in the fourth position for the first part of the race, but would fall back later to finish eighth.

Team Principle, Ricardo Juncos was thrilled to see Owen pick up not one, but two podiums along with Parsons taking home his first podium since joining the team this year.

“Overall we had a very successful weekend here at the Indianapolis Motor Speedway,” said Juncos. “Three of our four drivers were battling for a podium finish at some point between both races. Even though they did not all finish on the podium, I am very pleased with the great pace each one showed. We are just going to work even harder now to catch up with the pace of the yellow Pelfrey cars. Will (Owen) had two solid runs this weekend, earning his top finish of the season so far and following that up with another podium.  He (Owen) was very consistent behind the wheel and I know he will be a top contender as the season continues.  Jake (Parsons) did a great job this weekend and has really developed quickly behind the wheel of the Pro Mazda car in a short time. Even though Garett (Grist) did not get on the podium this weekend, I am confident he will bounce back as we move onto the first oval where he has had great success in the past. Nicolas (Dapero) really came alive in Round 6 this weekend, making his way to run third. Despite not finishing in fourth, he (Dapero) earned a lot of experience running with the front of the field. The weather really played a big role this weekend and I want to give a big thank you to the crew for working to keep the cars on pace with the consent changing conditions. I also want to thank everyone who came out to watch the race and to those who could not make it for all of their positive messages and support.”

Nicolas Dapero (Buenos Aires, Argentina):”It was a great weekend for me. I really improved a lot and gained a ton of experience battling with all types of conditions. I have also really started to understand the car and have really stepped up on the feedback I am giving to our mechanics and engineers. My pace really improved and allowed me to run with the front of the field. I still have a lot of improvements to make, but I am happy with where I have come so far this season. I want to thank all of the Juncos Racing crew for the awesome job they have done. Without a doubt we will come back stronger for the oval race at Lucas Oil Raceway!”

Garett Grist (Grimsby, Ontario, Canada): “Overall a rough weekend for us. We had great pace in practice, but when it came time for qualifying we were a second off and we were a second off in both races. We are going to take a look at things and see where we can figure out what’s going on. I’m still the only car to start on the front row besides the yellow ones. We have had some positives, but just not enough to take out of this weekend. In the first race I felt like I was just doing some laps and for the second race I went off on the first lap moving me to back to seventh. I was able to make some great passes in Turn-1 and Turn-2 which gave me some excitement. After that the race settled down and I pushed as hard as I could and stayed as consistent as I could be. Lucas Oil Raceway is coming up next, it’s a track I dominated at my rookie year in Pro Mazda. I’m hoping this year will be like my first year there, as it’s a track I really enjoy and my favourite oval we compete on”

Will Owen (Castle Rock, Colorado, USA): “We had a really good weekend. We achieved our goal which was to finish ahead of my teammates, and I was able to do that in both races which I am really happy about and a huge step in points. Now I am actually third in points, rather than seventh so that’s a huge step. We made a lot of improvements to the car over the weekend from where we started to where we finished out the weekend. We still our looking for the speed that Pelfrey has, but we are going to keep doing everything we can and working as hard as possible to get to their speed. I’ve got to thank my team Juncos Racing, and all of my sponsors for a great weekend!”

Jake Parsons (Melbourne, Australia): “I took my first podium in Pro Mazda this weekend, so this was a great weekend for me. We had a few mechanical issues to overcome at the start of the week, but we got it all on track and were able to show great speed and have a great first race. The second race of the weekend was a little bit tougher. The start was a bit frantic and I lost some spots.  I was able to fight my way back from eighth and was challenging for fifth by the end. I think I was more consistent in Round 6, I took it up a level which allowed me to have a good comeback. We have a test  coming up which will be my first time on an oval, so I am really looking forward to that and preparing for the first oval race at Lucas Oil Raceway later this month.”

The Pro Mazda Championship Presented by Cooper Tires continues with Rounds 6 and 7 of the Indianapolis Grand Prix on the 2.43 mile road course located at the Indianapolis Motor Speedway. For more information please visit juncosracing.com and promazdachampionship.com

About Juncos Racing:  Ricardo Juncos, a second generation driver, grew up with a deep passion for racing. Juncos made his first steps in the racing community driving karts throughout Argentina. After funding became difficult, Juncos worked for teams in order to support his own racing career. During this time Juncos took courses in mechanical and electrical engineering to fully understand racing on and off the track. Ricardo Juncos established Juncos Racing in 1997 as a formula team operating in Argentina. Six years later, Juncos Racing moved to Miami, Florida where they became a respected karting team recording multiple local, regional, and national titles. After a successful run in karts, Juncos Racing moved north to Indianapolis, Indiana the “racing capitol of the world,” in 2008 to join INDYCAR’s Mazda Road to Indy series. After only two years in the Star Mazda Championship, the team finished second in the 2010 championship while Conor Daly won the driver championship. Juncos Racing continued their run in the Pro Mazda Championship (the former Star Mazda) taking second in the 2012 and 2013 championships. Most recently 2014 proved to be one of the most successful years for Juncos Racing, winning the driver championship with Spencer Pigot and team championship in both the Cooper Tires Winterfest and Pro Mazda Championship. Juncos Racing expanded operations in 2015 to include two Indy Lights entries along with four Pro Mazda cars. Recently the team captured the driver Indy Lights Championship with Spencer Pigot, and took home their second consecutive team Pro Mazda Championship.