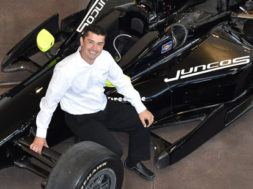 February 21, 2017 David Martin-Janiak
Juncos Racing announced today its intention to enter the 101st Running of the Indianapolis 500 presented by PennGrade Motor Oil at the Indianapolis Motor Speedway.
Juncos Racing, founded by Argentinean Ricardo Juncos, is a highly successful team running in the Mazda Road to Indy presented by Cooper Tires development ladder competition. The team currently fields two cars in the Indy Lights Series. Juncos Racing captured the 2015 Indy Lights driver championship with current Verizon IndyCar Series driver Spencer Pigot and has also claimed multiple driver and team championships in the Pro Mazda Series.
“I am so happy to officially announce our participation in the Verizon IndyCar Series,” said Juncos. “This is a dream come true for me and my team. It’s been only two months since our grand opening of the new Juncos Technical Center, which was a huge moment for us. Now we are becoming a new team in the Verizon IndyCar Series and will run in ‘The Greatest Spectacle in Racing,’ the Indianapolis 500. This is definitely one of the biggest moments in my life.”
Juncos Racing relocated its headquarters in November 2016 to a new, state-of-art facility in Speedway, Indiana. The 40,000-square-foot building hosts multiple office spaces, eight car bays, paint booth, simulator room and machine shop, along with parking for multiple transporters.
This May will mark the first appearance for Juncos Racing in the Indianapolis 500 as it expands its program to include the Verizon IndyCar Series. Driver and manufacturer announcements will come at a later date.
“It’s always hard to identify the right moment and right time to make a big move and make big decisions in motor racing, but I am confident the timing is right and that we will succeed as we did in the Mazda Road to Indy ladder series,” Juncos said. “I want to thank Mark Miles (Hulman & Co. CEO) and Jay Frye (INDYCAR president of competition and operations) from the Verizon IndyCar Series for all of their help and confidence they have had in me and my team. I also want to thank Mr. Kevin Kalkhoven from KV Racing Technology. He has been extremely helpful during this transition and, with his continued support and help with all of his experience in racing, we are confident going into this next level. Thank you to my family and my team for giving me massive support throughout the years, and to all of the fans, thank you!”
Frye welcomed the Juncos Racing news, pointing to it as successful evidence of the Mazda Road to Indy’s mission.
“INDYCAR has been fortunate to have many drivers graduate from the Mazda Road to Indy program to the Verizon IndyCar Series, and those drivers have done a phenomenal job over the years,” said Frye. “Another goal of the Mazda Road to Indy program is to graduate teams and INDYCAR is working hard to help create opportunities for those teams to move up to the Verizon IndyCar Series. Ricardo and Juncos Racing have a great history of success, and we are proud to have them become a part of the Verizon IndyCar Series.”
Kalkhoven, the KV Racing Technology co-owner, is eager to lend his support to the Juncos Racing effort for the Indianapolis 500.
“We are delighted Ricardo is developing a program to progress to the Indy 500 and beyond,” Kalkhoven said. “We are committed to helping him and his team with our experience, equipment and data to best ensure a successful entry.”

Ricardo Juncos, a native of Buenos Aires, Argentina, moved to the United States in 2002 after financially tough times plagued Argentina’s motorsports community. Juncos began working for a small karting team located in Florida and eventually started his own karting program.

Juncos Racing, a team that prides itself on more than just racing…

Juncos Racing is a championship-winning Mazda Road to Indy team currently running in Indy Lights presented by Cooper Tires.
Juncos Racing was established by Ricardo Juncos in 1997 as a small formula car race program based in Buenos Aires, Argentina. After times became financially tough, Juncos relocated to the United States in 2002 where he worked as a mechanic for a small karting team based in Florida. Juncos was then able to open the doors to his own shop and run in karting series throughout the United States.
In 2009, Juncos Racing entered in the former Star Mazda Championship (now the Pro Mazda Championship presented by Cooper Tires), where the team had great success in its maiden season, finishing second in the driver’s championship and third in the team championship. The following year, the team captured its first championship in the series with Indiana native Conor Daly. Fast forward to 2015, where Juncos Racing had its most successful season capturing the Indy Lights presented by Cooper Tires driver’s championship with current Verizon Indy Car Series driver Spencer Pigot and also claiming the Pro Mazda team championship.
The mission of Juncos Racing is to develop young drivers from around the world into the next level of their racing careers through the Juncos Racing Driver Development Program. Through this program, the team not only works with drivers on track to improve their skills behind the wheel, but also gives them the tools needed to understand the engineering and mechanics of the race car. Drivers who have participated in the program and have gone on to compete in the next level include Peter Dempsey, Conor Daly, Connor De Phillippi, Chase Austin, Kyle Kaiser, Nicolas Dapero and Spencer Pigot.
tags: 2017 Indycar Juncos Racing