Home OTHER OPEN WHEEL Kyle Kaiser Captures 3rd in Round 7 of the Mazda Grand Prix of Indianapolis
OTHER OPEN WHEEL
Popular videos
May 21, 2016 David Martin-Janiak 0 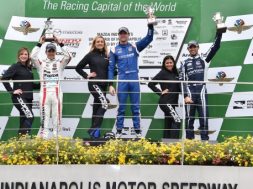 Juncos Racing returned to the podium this past weekend with American Kyle Kaiser picking up a third place finish in Round 7 of the Indy Lights Championship Presented by Cooper Tires in the Mazda Grand Prix of Indianapolis.

The Mazda Road to Indy series saw a wild week of weather at the Indianapolis Motor Speedway with sunny warm conditions turning to rain and ending with one of the coldest races on record on the 2.439 mile, 14-Turn road course.

The Indy Lights series kicked off the week with two sessions of testing followed by two practice sessions. Kyle Kaiser (Santa Clara, California) took the fastest time in the final practice before heading into qualifying. The next day qualifying did not go as planned for Juncos Racing with Kaiser taking the sixth starting position and teammate Zach Claman De Melo (Montreal, Canada) starting 16th.


Later that afternoon Round 6 did not get off to a clean start, with multiple drivers making contact in Turn-1. Kaiser escaped any damage, but was forced to take the run off in Turn-1, moving to the back of the field. Rookie Claman De Melo did not fare as well, leaving Turn-1 with damage to the front wing, which he would battle with on track for the entire race. Kaiser was able to pull off a sixth place finish in the #18 InterVision/NetApp/ JuniperNetworks car and Claman De Melo took 13th.

Temperatures lingering in the high 40’s for the final day of the Mazda Grand Prix of Indianapolis proved to be a game changer for the Indy Lights series, as the 16 car field looked to get their Cooper Tires up to temperature for the final race of the weekend. Kaiser took the 11th starting position and Claman De Melo started 15th for the 35 lap race. Kaiser was able to battle his way through the field at the start of the race to run inside the Top-5 and ended the day on the podium with a third place finish. Claman De Melo’s was making his way up to the Top-5 when his day ended early on lap 18, after making contact with two other drivers forcing his #13 Adidas/Seven for All Mankind car to finish 14th.

Kaiser’s third place finish in Round 7 marked his fourth podium of the 2016 season, moving him into second in the Indy Lights Championship standings.

“After a rough start to the weekend I was very pleased with the results in both races,” said Kaiser. “In such a tight championship, I know its weekends like this that make the difference at the end of the season. I’m very thankful for the team working hard this weekend to give me a great car in both races. I’m excited to get back on the oval in a couple of weeks for the biggest race of the year!”

Even though Claman De Melo did not get the results he was looking for, the young Canadian was able to take away a lot of experience in his first running at the Indianapolis Motor Speedway.

“Overall it wasn’t the weekend we were hoping for,” said Claman De Melo. “The results did not show what we were capable of, we were faster and I know we had the speed to finish in the Top-10. In Round 7 I was running just outside the Top-5, but a small mistake on my part costs us a great finish. I know we will bounce back as the season continues and will show the speed we have.”

Juncos Racing Team Principle Ricardo Juncos was pleased to see Kaiser pick up another podium finish and is confident the team will carry this strong momentum onto the famous 2.5 mile oval at Indianapolis Motor Speedway later this month.

“I am really proud of the results we were able to obtain after we struggled here last season,” said Juncos. “Kaiser did a fantastic job moving all the way up to a third place, after starting back in 11th. He (Kyle Kaiser) has stayed so focused this season and that has really shown with the multiple podiums and win his has earned. Zach (Claman De Melo) has continued to show great speed, despite not getting the results he deserves. At each event this year he has passed multiple cars, which is very impressive for such a young rookie. I am especially pleased to see how tight of a battle we have for the Indy Lights Championship, after six drivers have won in seven races. This really shows how competitive this series is and the high caliber of drivers the Mazda Road to Indy program takes in. I of course want to thank the team for all of their hard work, and for the fast cars they give these drivers, to the sponsors for all of their support, and to the families who make up Juncos Racing for all of their dedication to the team.”

The 2016 Indy Lights Championship Presented by Cooper Tires season continues May 27th with Round 8  on the famous 2.5 mile oval at the Indianapolis Motor Speedway. For more information please visit juncosracing.com and indylights.com.

About Juncos Racing:  Ricardo Juncos, a second generation driver, grew up with a deep passion for racing. Juncos made his first steps in the racing community driving karts throughout Argentina. After funding became difficult, Juncos worked for teams in order to support his own racing career. During this time Juncos took courses in mechanical and electrical engineering to fully understand racing on and off the track. Ricardo Juncos established Juncos Racing in 1997 as a formula team operating in Argentina. Six years later, Juncos Racing moved to Miami, Florida where they became a respected karting team recording multiple local, regional, and national titles. After a successful run in karts, Juncos Racing moved north to Indianapolis, Indiana the “racing capitol of the world,” in 2008 to join INDYCAR’s Mazda Road to Indy series. After only two years in the Star Mazda Championship, the team finished second in the 2010 championship while Conor Daly won the driver championship. Juncos Racing continued their run in the Pro Mazda Championship (the former Star Mazda) taking second in the 2012 and 2013 championships. Most recently 2014 proved to be one of the most successful years for Juncos Racing, winning the driver championship with Spencer Pigot and team championship in both the Cooper Tires Winterfest and Pro Mazda Championship. Juncos Racing expanded operations in 2015 to include two Indy Lights entries along with four Pro Mazda cars. Recently the team captured the driver Indy Lights Championship with Spencer Pigot, and took home their second consecutive team Pro Mazda Championship.