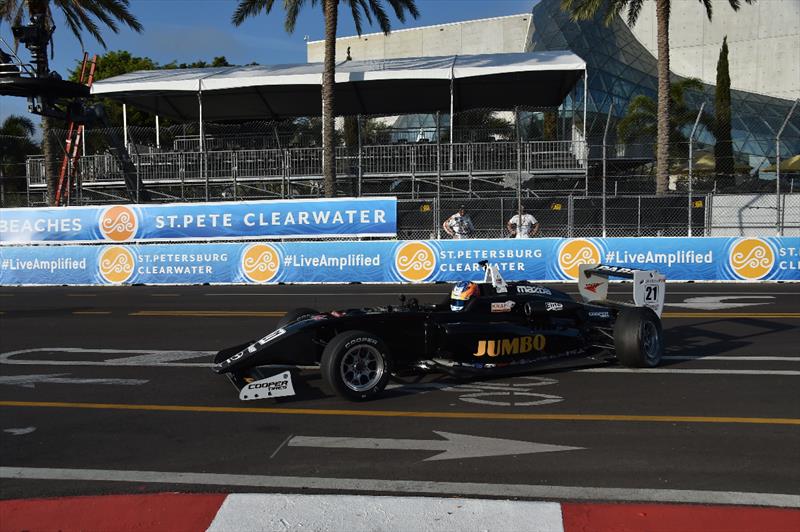 Rinus VeeKay introduced himself to American open-wheel fans late in 2015 when, after earning a Cooper Tires USF2000 Championship Powered by Mazda test as part of the MAXSpeed/Mazda Road to Indy Presented by Cooper Tires Driver Advancement Program, he steadily made his way up the timing charts at Circuit of the Americas to finish third in the final session, with two seasoned veterans in front.

As a KNAF “Talent First” selection driver, VeeKay has turned his sights on America and the Mazda Road to Indy, signing with series stalwarts Pabst Racing for the 2017 USF2000 season. VeeKay made his championship intentions known at the first race weekend of the year in St. Petersburg, Fla., earning podium finishes of second (from a 14th-place starting position) and third in his first two races.

Here, the young VeeKay talks about his first kart, the simulation sessions that introduced him to American racetracks and his very interesting linguistic talent!

My dad used to race in a Benelux NASCAR series and formula cars and I went to many of his races with my sister and my mother. On my eighth birthday, my dad gave me a Tony Kart and I began racing just for fun. And there it all started! When I was 13 I started racing on the international level and it went very well.

Take us through your racing career to date.

I won the Dutch Rotax MAX Junior class in 2013 at the age of 12 and I was the youngest Dutch champion in Juniors. The next year, I moved to Italy to race in the KF Junior series and I also finished third in the CIK-FIA Academy World Championship.

I was chosen to be in the KNAF Talent First program in 2013. It is an NOC/NSF-approved program, which means you have Dutch Olympic status when you’re in the program. They support young athletes in many areas, including sim, sport and media training. With the sim training I focused first on the European tracks and when I tried some of the American tracks, I really liked them. I told my Dutch sim coach Atze Kerkhof, “This is it. This is how I have to go!”

I then moved to the Rotax Senior class and started racing in America. I was scouted by the Mazda Road to Indy organization and the MAXSpeed Group for their Driver Advancement Program. They looked at my results and watched me in Las Vegas at the last round of the U.S. Open championship. In that event, there were some accidents in the first race, so I started in the back and drove all the way to the front. At the prize ceremony, they announced the four drivers that would be in the program and I was one of them. I earned a USF2000 test with the program.

What got you interested in the Mazda Road to Indy and USF2000?

I met a lot of people in America and it is one of the best countries I’ve been in. The people are very nice. When I won the MAXSpeed program and earned a USF2000 test at Circuit of the Americas, I did well in the test and made – together with my father and the KNAF Talent First organization – the decision to race in America. And of course, the Mazda Road to Indy was introducing a new USF2000 car for this year that was even faster and safer than the previous car so we thought it was the right time to step in.

There were a lot of reasons why I decided to come over to America to race: there is such a good field here, with all the experienced drivers. And of course the Mazda Road to Indy scholarship makes it all very interesting! I also like all the people who run the series.

What are your expectations for 2017?

I realize that this is my rookie year, so I want to be making progress all season. That’s one of the most important things to do your first year, but I also want to get as many podium finishes as possible so we can have a chance to fight for the championship.

It will be difficult with the time difference, as I will be going back home after each race. I will have a schedule of homework I have to do, and I have arranged with school to do exams in America if I have to.

What did you think of your first race weekend at St. Petersburg?

It was a great weekend. I didn’t expect so many people. There were so many fans and the track was great, being downtown near the harbor and the airport. I went into the weekend thinking about driving and having fun, and I did both! It was the first time for me on a street circuit; I’ve never driven so close to the wall before. It was my first race with the Pabst Racing team and with the series, so I didn’t know what to expect. The races were very good, especially the first one, so we have a good start to the championship.

On Sunday, we bought seats in the grandstand on the Start/Finish straight and spent some time in the Dale Coyne Racing pit. It was a very long race, but because of that, there were more possibilities for drivers to come from the back as Sebastien Bourdais did. I watched some of the things the drivers had to do in the longer race, like managing the tires and working on strategy, so I have to keep these things in mind if I get to IndyCar.

What kind of activities do you do away from the race car?

I do sim racing a lot and I train physically, with boxing plus a special customized gym training schedule. I train six days a week. While I’m in Holland during the summer, I like to go jet skiing because it’s quick like car racing!

What is your favorite racetrack?

In America, I like Sebring a lot because it’s so challenging with all the bumps and the tight braking zone after the long straight. All the different kinds of corners have bumps so you get very tricky conditions with the car. In Europe, I like Estoril in Portugal – it’s also very challenging, with a variety of corners, and the elevation changes.

I think it would be something with cars or racing, because I really couldn’t imagine my life without racing!

Do you have a “hidden” talent?

I speak words backwards as fast as forward (in Dutch). That’s why my friends and family call me “Sunir” instead of Rinus.

What do you do to relax and get away from racing?

tags: 2017 Rinus VeeKay Series News UFS2000
previous 2017 WILL HAVE JM CORREA’S MAIN FOCUS ON THE ADAC FORMULA 4 CHAMPIONSHIP
next Worm: “It feels good” to be in British Formula 3