My Mazda Road to Indy: 10 Questions with Ryan Norman 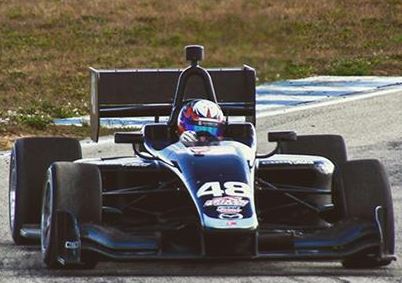 18-year-old Ohioan Ryan Norman has taken an interesting route to the Indy Lights Presented by Cooper Tires series, starting his racing career in motocross instead of the more typical karting ranks. He’s proven to be a quick study, however, earning a formula car title last year in only his third season behind the wheel.

Norman details how he switched from racing bikes to racing cars, his first experience at the Indianapolis 500 and what he looks forward to the most as he joins the Mazda Road to Indy Presented by Cooper Tires.

I was born in Cleveland and I’m a loyal Cleveland sports fan – but that’s a little easier now that the Cavaliers have won the NBA championship! I don’t enjoy the winters too much but I love the summers. I played soccer as a kid and baseball in middle school.

I had a 4.0 grade point average in high school, but I’m taking time off from school now to focus on Indy Lights. Racing is my goal, so it wasn’t that hard taking a step back from school. My mindset has always been that I can go back to school in the future but if I’m going to progress up the racing ranks, I have to do that now. Maybe next year, if I stay in Indy Lights – and once I know the schedule and how everything works – I might put in a few classes in college. I love science. I wasn’t a big math fan but I love environmental science and those types of classes.

How did you get into racing?

I raced dirt bikes from age 4 until I was about 13 or 14 years old. That’s mostly what I did outside of school. My dad took me to a Supercross race when I was about 3 years old and I just fell in love with it – the sound, the jumping in the air, all of it. I had to give up my sippy cup to get the bike! I rode until age 10 then raced until 14, though it wasn’t as serious as racing cars.

Take us through your car racing career to date.

My dad’s company (Arts and Exhibitions International) sponsored Alex Tagliani in the Indianapolis 500 when I was 9, and that’s when I first got my love for cars. I kept telling my dad that we needed to get into karts, but we were already in motocross so we didn’t know anyone in karting. But we knew that we could meet people through Skip Barber, so I did the three-day school when I was almost 16. I went back for the two-day, and then they recommended that I do the Summer Series. Since I didn’t have the karting background to go off of, I did some SCCA club racing after that instead of going straight into USF2000.

I got second in the Runoffs in Formula Enterprise, and then tested with Pabst Racing’s USF2000 team. Their engineer and driver coach, Tonis Kasemets, suggested that I gain more experience and racecraft by doing Formula Atlantic with K-Hill Motorsports since USF2000 was so competitive. It was all about the seat time, but then I won the Atlantic Championship and won the SCCA Runoffs. K-Hill also has one of the older Indy Lights cars, which I tested. We sat down five months ago and talked about which route would be best for me, and we felt I was ready for Indy Lights.

What got you interested in the Mazda Road to Indy and the Indy Lights series?

If anyone wants to go to IndyCar, the Mazda Road to Indy is where you have to be. All the best teams are here – like Andretti Autosport. It’s important to me to have that connection with the team and to learn from them. I can go to the IndyCar races that the Mazda Road to Indy doesn’t go to and watch what they do. Drivers from all over the world come here and I think it’s the best place to be.

What are your expectations for 2017?

I want to get in and get my feet wet. It will probably be a two-year program, so this year will be all about getting comfortable. I’d like to get a top-five at St. Pete and be in competition to win races by the end of the year. I’ve gone to the St. Pete race for the past four or five years and absolutely loved it, so I can’t wait to get into the car there. I’m also really looking forward to the Freedom 100. It’s such an amazing race.

What kind of activities do you do away from the race car?

I do a lot of fitness stuff, like rowing and weight lifting. I try to get into the gym for an hour and a half or two hours, six days a week. My simulator just broke, but usually I’m on that a good two or three hours a day. Other than that, I’m looking over data and working on the business side of things. My dad is my marketing guy so I also work with him to expand our sponsorship.

What is your favorite racetrack?

Watkins Glen – with the elevation changes and the sheer size of the place, it’s unbelievable. With the repaving, it’s just so fast and so smooth!

Before racing, I wanted to be in Special Forces, like the Navy Seals. It would be the peak of a mental and physical challenge.

Do you have a “hidden” talent?

I can do a back flip on the ground. About three years ago, I saw a video on YouTube of how to do a back flip and my friends and I eventually got it. But I don’t think that’s something Michael Andretti would want me to do now!

What do you do to relax and get away from racing?

I have friends who go to Kent State, which is about 30 minutes from here, so I go hang out with them. I enjoy skiing, but not during the race season. My dad lives in Ft. Myers, Florida now, so it’s good to have a place to go to stop thinking. When you think about something 24/7, you need to relax your mind!