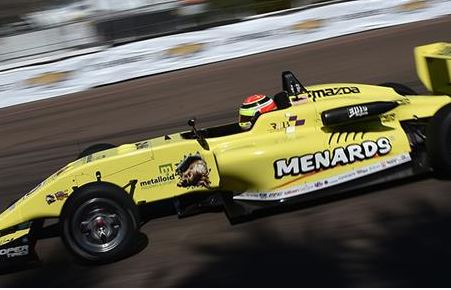 St. Petersburg, Fla- This weekend the Cooper Tires USF2000 Championship Powered by Mazda was busy navigating the streets of St. Pete for Rounds 1 and 2 of the 2017 season. It was a busy weekend with two qualifying attempts taking place on Friday and both races occurring on Saturday.  The No. 20 Menards/Metalloid Firearms & Sports car driven by Chandler Horton started Race 1 in the 16th position and ended in the 20th position Saturday morning and then went back out Saturday afternoon to start Race 2 in the 16th position and finishing in 13thplace.

“We had a great Round 1 and 2 in St. Pete all due to the hard work of our crew, who provided an amazing race car to Chandler Horton, who drove a great second race and to the support from our sponsors Metalloid, Menards and Wild Boar Energy,” Ryan Barth the team principal of RJB Motorsports stated about the race weekend.

“I was happy with our first run Thursday afternoon. I think it was good for us to get out there and set a good pace and mojo for the weekend.  Overall, I think we can be happy with how our weekend went. We had some good moments. We will learn from it and come ready for the next one. As always, a huge thank you to RJB Motorsports, Menards, and Metalloid for the support,” said driver Chandler Horton after his first race weekend with RJB Motorsports and the Mazda Road to Indy Presented by Cooper Tires.

About RJB Motorsports: Former pro hydro boat racer Ryan Barth established RJB Motorsports in 2011 when he made the switch toward four-wheel racing in the SCCA’s Formula 600 category. He quickly formed a partnership with fellow F600 racers and brothers Fred and Tom Edwards, whose company, Metalloid Corporation, produces a range of environmentally friendly fluids to the metalworking industry. The association led to the formation of the F600 Challenge Series, a cost-effective, entry level championship featuring motorcycle engines and six-speed sequential transmission, and more recently to a long-term goal of assisting talented young drivers via the proven Mazda Road to Indy.