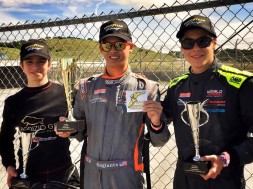 New teams, new drivers, along with series veterans battle it out at the season opener

While much of Northern California was getting covered with rain, Monterey featured stellar weather for the opening rounds of the Formula Car Challenge presented by Goodyear. “We had delayed starts on Friday and Saturdaydue to fog,” noted series official Ben Hettema, “but all the the on-track sessions were in dry conditions.”

The series opener took place inside of the SCCA Group 2 event. 32 drivers were registered in Group 2, with 23 of those drivers being eligible for Formula Car Challenge points. “This season we have 14 races, and 4 of them are inside of SCCA run groups,” added Hettema. “Every season we design the schedule to provide drivers with a variety of different racing experiences. Racing inside of a larger group presents a unique dimension of competition not unlike racing at LeMans or the 12 Hours of Sebring.” Once the fog rolled away on Fridaythe drivers got a 25 minute practice session before qualifying.
Round 1 Pole Positions:
Pro FM Bruno Carneiro – 1:28.08
FormulaSPEED Jonathan Sugianto – 1:30.35
Formula Mazda Bill Weaver – 131.09
Round one got off to a great start, with lots of action. Pro FM series rookie Carneiro battled hard with MRLS seasoned veteran Ed Ozard, with Ozard taking the win at the checkered flag. VMB FormulaSPEED drivers Sugianto and Williams fought for the first position, with Sugianto taking the win and Williams taking the fastest lap of the race. The drive of the weekend was in the FM class. FM veteran Stew Tabak had his qualifying times taken away when his car failed to meet sound regulations. Tabak carved his way through the entire field from the very back. He finished second, with Bill Weaver taking the win in Formula Mazda.

After only a couple of hours after round one, it was time to qualify for round two.
Round 2 Pole Positions:
Pro FM Ed Ozard – 1:28.04
FormulaSPEED Carter Williams – 1:30.63
Formula Mazda Bill Weaver – 131.39
Round two was another great race. Carneiro and Ozard continued their battle from the previous day with the young rookie coming out on top at the checkered flag. FS pole sitter Williams needed to pit early for a technical issue. His team got him back on track, and he was able to finish 3rd in class. FCC series veteran Frank Cusack took the win in the FormulaSPEED class. In Formula Mazda Stew Tabak and Randy Sturgeon battled the entire race for the 2nd position, while Weaver led from flag-to-flag.
Round 2 Podium Pro Mazda:
1st Bruno Carneiro
2nd Ed Ozard
3rd Steve Baumhoff

At every Formula Car Challenge event series partners provide additional awards to the competitors. This weekend, Bill Weaver, Jonathan Sugianto, Brad Drew, and Ed Ozard were awarded complimentary Goodyear Racing tires. Sugianto, Williams, Weaver and Ozard were each presented with The Molecule Pole Award. The Molecule Pole Award is given to the fastest qualifier in each class. The award includes a selection of Molecule suit care products. Next up on the FCC schedule is an exclusive double-header at Thunderhill Raceway Park April 16th and 17th.