Infiniti: Hands-free: What it’s like to “Drive” an autonomous drive car 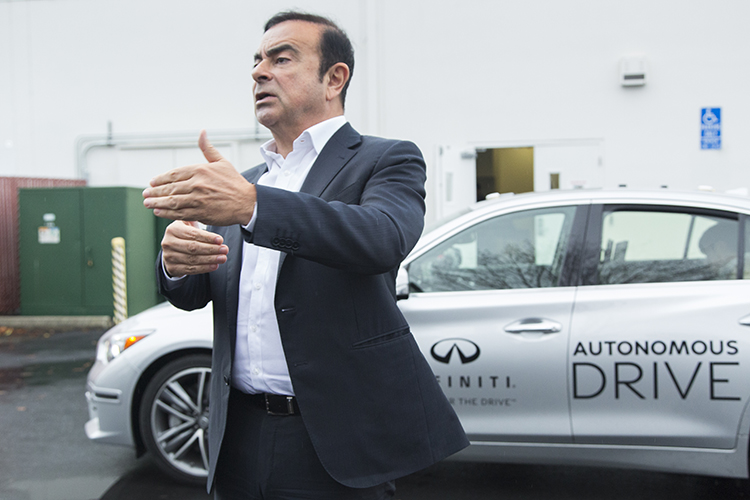 SUNNYVALE, Calif. – Today, I experienced the unusual, thrilling sensation of riding in the driver’s seat of an autonomous-drive car as it navigated the streets of Sunnyvale in California’s Silicon Valley.

The car is an advanced prototype Infiniti Q50 sedan capable of handling complex city driving. It has a special California registration for autonomous drive vehicles, and I had to receive a special state license to operate it hands-free.

What struck me was how quickly I grew comfortable as the car smoothly and safely negotiated the suburban streets, including intersections and dense traffic. Accompanied by an engineer, we simply set the destination, put the car in autonomous drive mode, and off we went – safely, without a hitch.

We went on both the freeway and city streets; there were times when other drivers cut in on us, but never did we feel threatened. Each time the car anticipated the other car’s move and reacted appropriately.

As I mentioned in a recent post, cars that can change lanes on their own, negotiate city streets and handle the drudgery of stop-and-go traffic are coming soon. In fact, the Renault-Nissan Alliance has committed to launch at least 10 models with significant autonomous drive functionality by 2020.

As these technologies advance, the auto industry has an unprecedented opportunity to make our roads much safer while giving drivers a less stressful and more productive commuting experience.

Today (January 5), I will present our vision of an autonomous and connected future at the Consumer Electronics Show in Las Vegas. You can watch it live here.

These technologies are critical to deal with a future in which the population is rapidly aging and the number of megacities of more than 10 million people is on the rise. Every day, more than 8,000 baby boomers turn 65 in the United States.

Autonomous-drive cars will help older drivers get around safely much further into their senior years. They also hold the potential to help ease urban congestion, improve traffic management, and make our roads far safer.

But what I believe will win over drivers – even those of us who love to drive – is the fact that autonomous drive and connectivity technology will give us back some time to use more productively. After all, nobody enjoys negotiating stop-and-go traffic on a clogged expressway.

The average driver spends two hours in the car each day commuting to and from work, school and other destinations. Imagine if you could get back this time to make yourself more productive by taking part in a video conference, checking your email or to just relax by watching a favorite entertainment program.

Many of today’s cars already are equipped with several building blocks for autonomous drive technologies, including lane-departure prevention, forward emergency braking, and improved safety sensors. With almost every automaker now developing these technologies, we are going to see advancements come in rapid succession.

It is important to make a distinction between autonomous drive features that will be introduced in the next few years, and fully autonomous, driverless cars, the mass marketing of which will come later.

At the Alliance, our strategy is to roll out autonomous-drive technology in four stages.

Stage 1 is autonomous drive on single lanes. We launched this stage in August with the introduction of ProPILOT technology for single-lane use on highways. It is being offered initially on the Nissan Serena family minivan in Japan and has been quite popular: Fully 60 percent of Serena customers have opted for it.

Stage 2 is autonomous drive for multilane highway driving with lane changes by 2018, and Stage 3 is autonomous city driving, which we expect by 2020.

The fourth stage is a completely driverless car – no one even needs to be inside it; the car drives itself with no need for human intervention.

Already there are small fleets of driverless taxis, or “robotaxis,” being tested in limited areas of a few cities around the world.

But the technology still needs to be perfected in the extreme conditions to which cars are sometimes exposed. In addition, regulators and lawmakers in many different jurisdictions will need to put in place the new laws and regulations necessary to permit the widespread use of driverless cars.

Of course, we recognize people will always want the choice to drive on their own. Our pursuit of this new technology isn’t about giving up driving – rather, we want to give consumers the choice to decide when, where, and for how long they want to drive.

But I can tell you this: Once you’ve experienced a car that drives itself, you will feel like you have stepped into the future.