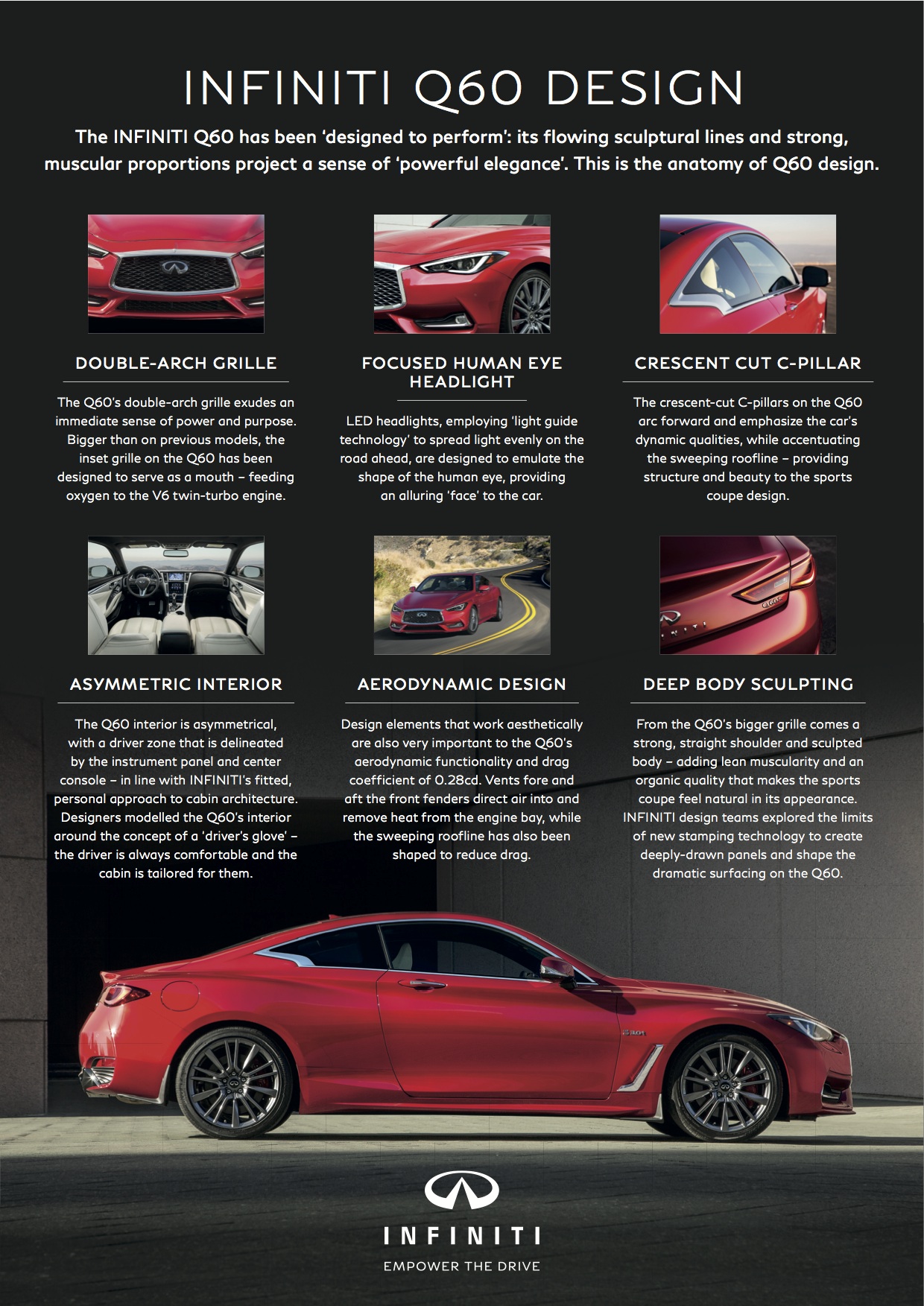 HONG KONG – INFINITI has won the prestigious iF Design Award for the Q60 – a sports coupe that combines expressive design with exhilarating performance and dynamics.

The iF Design Award is one of the most important cross-industry product design prizes, with a jury made up of 58 independent design experts from around the world, representing a broad range of sectors. Submissions are judged on innovation, functionality and ergonomics, aesthetics and the sustainability of its production process and product attributes.

Awarded in iF Design’s “Automobile” category, the Q60’s powerful and bold design expresses a powerful elegance that is distinctively INFINITI. Complementing its design, the D-segment sports coupe’s exhilarating performance is underpinned by its all-new 3.0-liter V6 twin-turbo engine. Dynamic enhancements, including second-generation adaptive steering and an all-new digital suspension, result in a sports coupe that is designed and engineered to perform.

This is INFINITI’s second iF Design Award in a row, following a “Professional Concept” product design award from iF for the Q80 Inspiration fastback sedan concept car in 2016.

The iF Design Awards is held annually by one of Germany’s oldest design organizations, iF International Forum Design GmbH in Hannover. For the 2017 awards, the jury’s independent design experts judged more than 5,500 entries, submitted from 59 countries around the world.

About INFINITI
INFINITI Motor Company Ltd. is headquartered in Hong Kong with sales operations in over 50 countries. The INFINITI brand was launched in 1989. Its range of premium automobiles is currently built in manufacturing facilities in Japan, the United States, United Kingdom and China.  INFINITI plans to also expand manufacturing into Mexico by 2017. INFINITI design studios are located in Atsugi-Shi near Yokohama, London, San Diego and Beijing.

INFINITI is in the middle of a major product offensive.  The brand has been widely acclaimed for its daring design and innovative driver-assistance technologies. From the 2016 season, INFINITI is a technical partner of the Renault Sport Formula 1® team, contributing its expertise in hybrid performance.