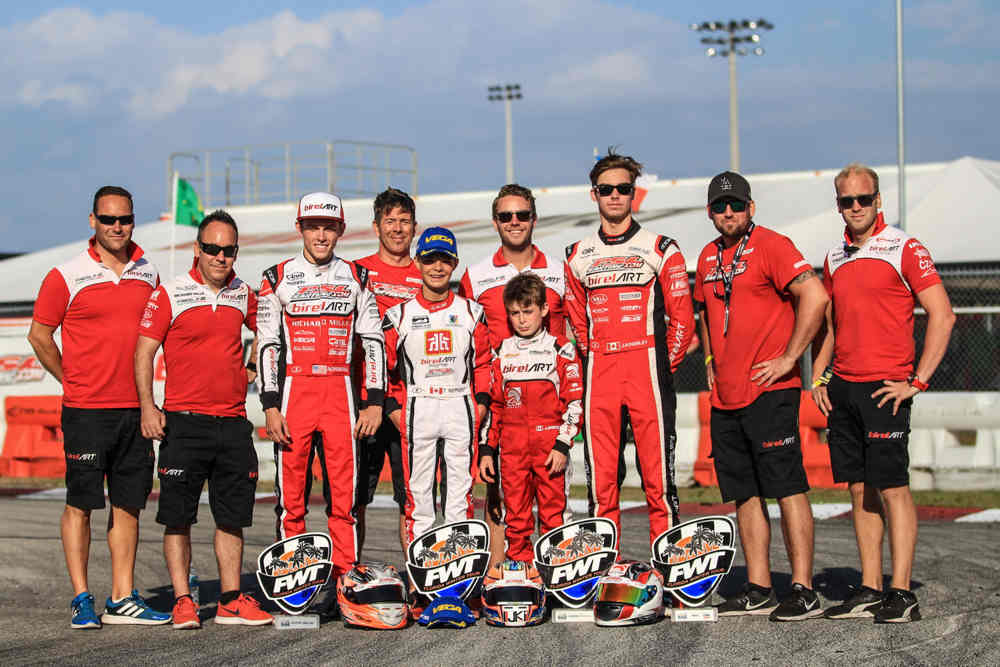 With two weeks of racing at the Palm Beach International Raceway in South Florida, PSL was able to take home serious hardware and gain some valuable championship points for the FWT title.  Alongside PSL, some of America’s top Birel ART race teams like Andersen Karting and Ben Cooper Racing (BCR), were able to show case their top talent all weekend long.
In Senior Max, Ryan Norberg has been the lead driver nearing a perfect season thus far, qualifying pole and taking 1 of the 3 heat wins, Ryan would get fast lap and had majority of the races, however Mathias Ramirez (Andersen Racing) would come out on top, making an all Birel ART podium with Ramirez P1, Norberg P2 and Lupien (BCR) P3.

Junior MAX standouts, Thomas Nevpeu, Yuven Sundaramoorthy, and Ryan McDermid would all showcase their ability to be in contention for a win this past weekend.  Thomas Nevpeu, despite a massive accident in Heat 2, would find himself crossing the line P2 with fast lap, while Yuven faced retirement in the earl in the final  .McDermid would suffer the end result of a massive pile up in corner 1, forcing him to the back of the field.  Mini-Max was an exciting one for the Canadian, Justin Areseneau as he picked up his first ever win at a USA event.  Thomas worked his best as he was chased by the competition, but was able to succeed as he put in quick lap after quick lap.

In DD2, Greco and Kingsley would battle hard in the heats, eventually both starting on the front row for the final.  Eventually, Kingsley would go on to win the main, however Greco would receive a penally from the stewards setting him back a few position.  Kingsley at this point almost has the season totally secured.  In Micro Max, Miguel Costa would fight through the heats winning Heat 1, but having tough battles with his competitors throughout the weekend, finishing inside the top 10.

Now, PSL will focus it’s attention on to the SKUSA Winter Nationals, where a tent of 15+ drivers will attack the New Orleans race track.  For more information, please contact info@pslkarting.com