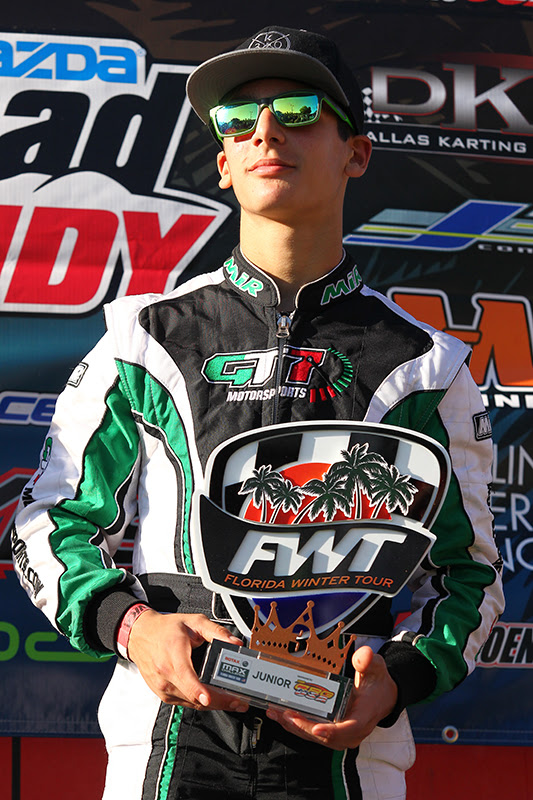 Gangi Jr. was named one of 12 finalists in the 2015 Mazda Road to Indy/MAXSpeed Group Driver Development Program (Photo by: Cody Schindel – CanadianKartingNews.com)

Brookville, New York – October 19, 2015 – With over 100 race wins and numerous championships to his credit, karting star Anthony Gangi Jr. now has the possibility to take his racing career to the next level. Recently submitting his application to the 2015 Mazda Road to Indy and MAXSpeed Group Driver Advancement Program, the GT7 Motorsports pilot was selected as one of 12 finalists to proceed in the program. Four winners will be chosen to participate in a one-day test in the Cooper Tires USF2000 Championship Powered by Mazda during off-season testing, giving these karting drivers the first taste of the Mazda Road to Indy ladder program.

“I am honored and excited to be named as one of the 12 finalists in the 2015 Mazda Road to Indy and MAXSpeed Group Driver Advancement program,” explains Gangi Jr. “I am now preparing myself for the interview process. I am confident I can put my best foot forward, and impress the judges with my personality as well as showcase my racing talents.”

Gangi Jr. Looks to Take the Next Step in His Racing Career

Gangi Jr. will next partake in a videoconference interview with a panel of judges including Verizon IndyCar drivers Josef Newgarden and Simon Pagenaud, Andersen Promotions COO Michelle Kish and MAXSpeed Group President Richard Boisclair. The four winners will be announced during the US Open series finale in Las Vegas at the end of October.

The karting phenom competed in Italy at the ROK Cup International Final with Team USA this past weekend, and will return to Europe in November for the Rotax MAX Challenge Grand Finals. With a resume of three United States Rotax Grand National titles, multiple Florida Winter Tour championships and vice-championships, SKUSA SuperNationals winner, as well as 100+ race wins, Gangi Jr. is certain to fair well as he looks to take his racing career to the next level.