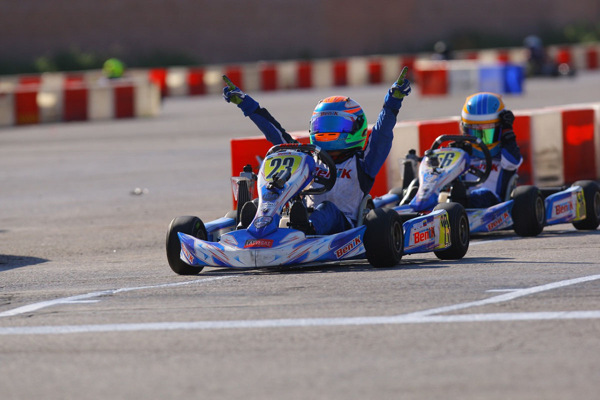 With the first of two events in Las Vegas, Nevada now complete, BENIK Kart was able to secure a sweep of the Rotax Micro Max podium in another dominating performance by the growing chassis brand. Leading the way to the event victory was Santiago Trisini with his second US Open main event win of the season, while newly crowned champion Diego LaRoque would cross the line second.

“The BENIK brand was again at the front of the field as three drivers piloting our equipment were able to cross the line 1, 2, 3,” explained Nick Mitchell, Co-Owner of BENIK Kart. “On permanent tracks, temporary circuits, with different engine packages and with all different brands of tires, we have come to the forefront of the cadet karting world.”

In qualifying, it was the Diego LaRoque who stole the show taking the pole position alongside his teammate, Santiago Trisini as the BENIK brand would lock down the front row. Working through the four heat race format, the BENIK brand took three of four heat race wins before Saturday would see a complete sweep of the Rotax Micro Max podium.


Mitchell continued, “Santiago drove a great race as he worked well with Diego to draw away from the field leaving them two to battle for the win.”

When the final checkered flag would fly, Trisini would edge out LaRoque for the win but Diego would get the best of Santiago in the US Open championship battle adding another title to the resumes of both BENIK and Diego LaRoque. James Egozi, racing under the Koene USA banner aboard a BENIK would make it a sweep of the podium for the chassis brand as he came from a tenth place starting spot on the grid and scored a solid podium result.

Next up for Team BENIK will be the granddaddy of them all, the Superkarts! USA (SKUSA) SuperNationals. Taking place November 16-20at the Las Vegas Convention Center in the heart of Las Vegas, Nevada, BENIK will be aiming for the top step of the podium in multiple different racing divisions. With a strong field of drivers in Micro and Mini Swift, stay tuned for an event preview media release next week.


The next Rotax event for Team BENIK will be the 2017 MAXSpeed Entertainment promoted Florida Winter Tour. With the Rotax Mini Max class making the switch to the 950mm chassis, the BENIK brand will have a strong presence in both Rotax Micro and Mini Max as well as Vortex Micro and Mini ROK. Drivers interested in the 2017 Florida Winter Tour are asked to contact Team BENIK.

For more information on the BENIK Kart, please visit www.benik-kart.com.