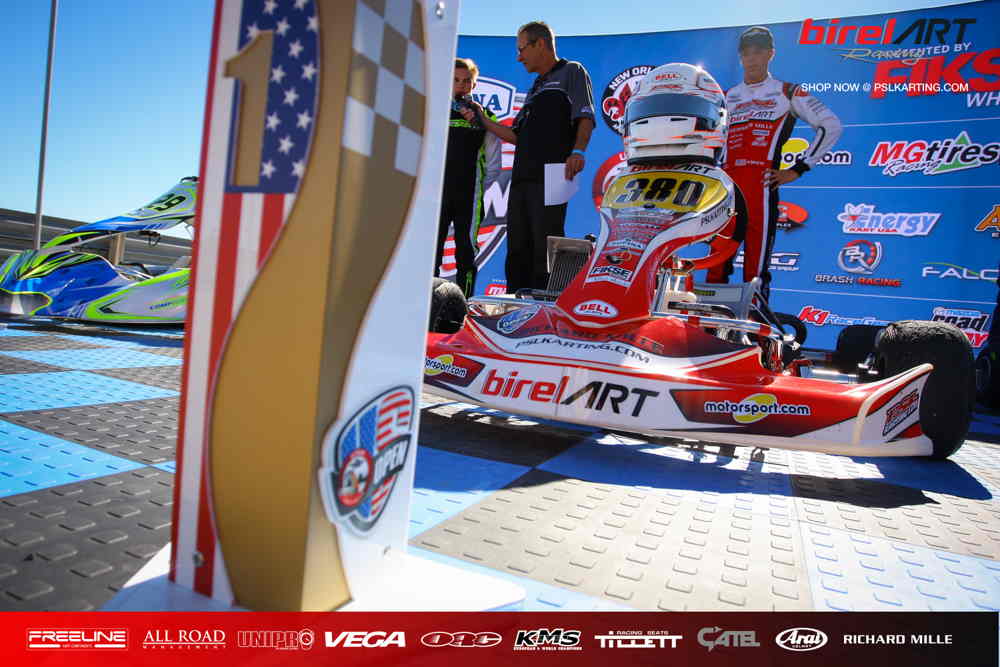 Returning to Salt Lake City after nearly 3 years, the team was able to take 4 wins and 6 podiums putting Birel ART on the top step of the podium.

Oliver Askew, operating with a nearly perfect score in the US Open has been a dominating force on the RY-30-S8 (all 30mm) Birel ART. In the final Oliver would go on take advantage of a mistake by P2 on the start and maintain his gap from flag to flag. Oliver also earned (for a second time) a ticket to the grand finals, in which he will decline for the DD2 ticket.

Senior Shifter pilot and Florida resident, Kyle Kirkwood would drive a stock-honda shifter for the first time since the end of 2014. Kyle made it look easy aboard a CRY-30-S8/Swedetech over the course of the final, setting his machine to cruise control and taking the win with a comfortable lead.

Rotax Mini Max pilot, Thomas Nepveu proved that his driver training from PSL and PSL-BirelART- X3 chassis’s was the one to beat, however an incident in the middle of the final would end his chances for a podium finish, ending P8.

Rookies to team PSL, Sundararmoorthy & Garcia (Junior MAX) would involve himself in a first corner incident during the main, but demonstrated huge gains this weekend, sure to be on the podium soon. Micro Max drivers Miguel Costa and Powell would battle in the 25+ kart field to develop their skills finishing P7 & P9.

French driver, Jermie Charon from France would jump into competition against America’s best Master’s drivers to take a convincing P2 under the hot Utah Sun Now, the team focuses their energy on ECKC, Coupe and SKUSA. Follow us on IG & Facebook here!