JAK CRAWFORD HEADS BACK TO ROTAX GRAND FINALS IN PORTUGAL 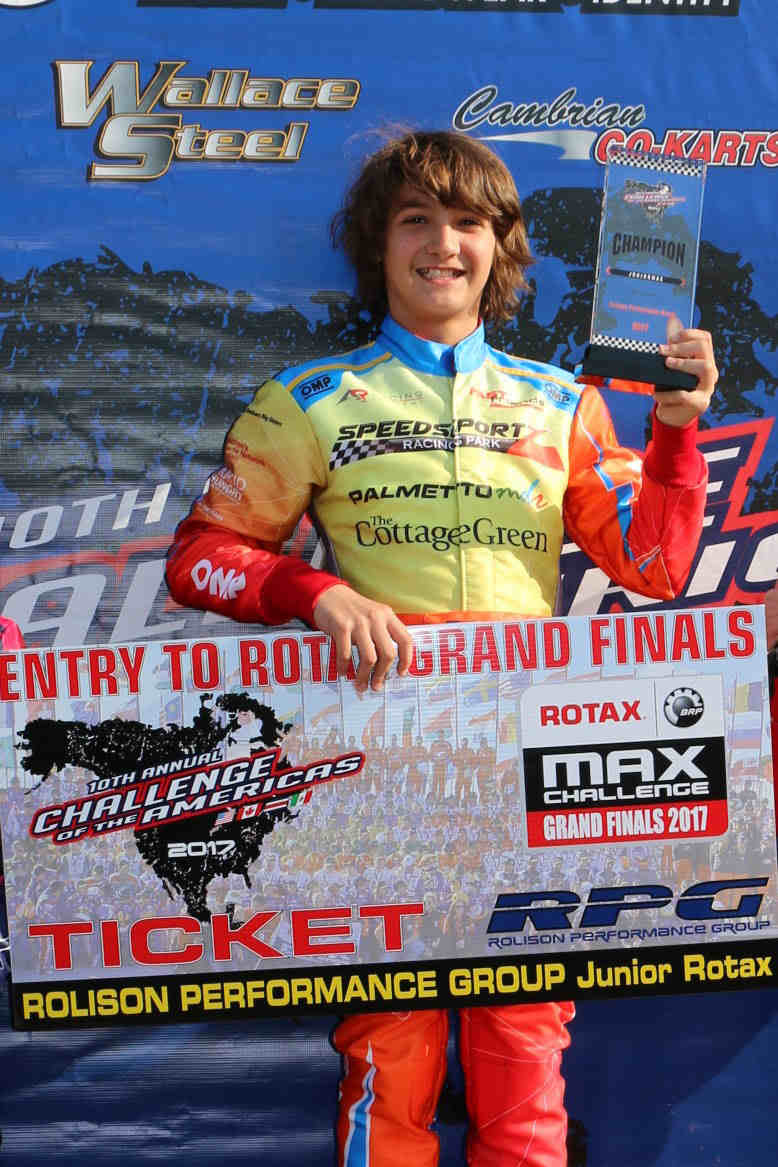 “Jetpak” Jak Crawford has secured his third straight Rotax MAX Challenge Grand Finals ticket through his Rotax Junior championship run at the recently completed Rotax Challenge of the Americas. Although Jak has earned a ticket the past three years, 2017 will be his first official time competing in the event as a member of Team USA.


In 2015, Jak Crawford was invited to travel with Team USA as a spectator to Portimao, Portugal with a prepaid trip from MAXSpeed Group. Jak unofficially participated on track that year in Rotax Mini MAX, experiencing a fair share of misfortune, including being upside down. In 2016, Crawford earned entries to the Rotax Grand Finals in Sarno, Italy, and the ROK Cup International in Lonato, Italy. The events were held the same weekend, so the Crawford family made the difficult decision to forgo his Mini MAX invite to the Rotax Grand Finals in order to defend his second place International Rok Cup finish from 2015. Now, in 2017, Jak will gratefully accept his Team USA ticket and return to Portugal, racing on the international stage yet again, this time in the Junior MAX category.

The latest Grand Finals ticket was earned this past Sunday in Sonoma, California, where Crawford was crowned the Rotax Junior Challenge of the Americas Champion. After sweeping rounds three and four of the series in Phoenix this February, the young Texan came into the final rounds as the points leader, leading by 42 markers. He held a comfortable lead, but the championship was not quite a foregone conclusion. If things went his way, Sonoma would shape up to be an easy weekend.

Saturday began with rain in the forecast, resulting in a wet and intermittently wet track throughout the race day. This would test the rookie Junior driver and prove his true racing mettle. Crawford kicked off the day on a strong note in the warm-up session, outpacing his championship rival on the track by over a second. In qualifying, Jak would be outpaced by almost two seconds by the same driver, a stunning turn around in one session. Jak would finish fourth in the prefinal.


Saturday’s final held a bit of drama, as the drivers had to make a tough call on whether to run rain tires or slicks on a drying track. The championship leaders all chose the slick tire option with a track that was still damp in a lot of the areas. With a handful of drivers crashing in turn four on the formation lap, Jak was caught up by being forced to take evasive action to miss the carnage. Ending up off the surface and stuck in the mud, the green flag would fly as the remainder of the field would start. Usually when drivers are caught up in crashes out of no fault of their own, the race does not go green, but officials decided to run the main event with only Jak remaining off the racing surface. Jak did not make the formation lap, resulting in a DNF, now making Saturday his drop race in his quest for the points championship.

Crawford came into Championship Sunday needing a strong finish but the day did not start well for the normally steely eleven year old. Jak was two and a half seconds off the pace in the morning warm-up. Most of the problem was traced to an electrical issue, but the team made numerous chassis changes as well, including a seat change. Anxious about the good day he needed that seemed to be slipping away, Crawford was itching to get back on track and continue his title run.

With the engine issues fixed, an improved chassis, and a few pre-qualifying pep talks, Crawford hit the track for qualifying. He missed the pole by a scant two one-hundreds of a second, but knew he had the speed, and his had confidence returned. After another seat change and starting second in the prefinal, he was shuffled back to seventh on the start, having to battle his way through the field for the win.


Going into the final aware that he had no race drop remaining, while his championship rival still had a race drop opportunity, Jak and his Nash Motorsportz team could not risk his shot at the championship, so they made a decision to play the final race extremely safe. Jak was told to concede first position if heavily contested, then follow the rival without contesting for a win. It was a smart, safe, points-protecting decision based on winning a championship versus winning a single race day.

“I did not like the team orders, but I had just watched my Nash teammate Christian Brooks crash in the last turn in his prefinal during a battle on track and finish last, so I knew I could not take that chance in my final race,” says Jak. “The speed we found today and the advice I was given was a team effort and I am very thankful to my Nash Motorsportz team.”

Jetpak Jak would like to thank Nash Motorsportz, Precision Works Racing Engines and Kevin Glover, Chris Hatfield, Alfio Archidacono, OMP for the racing gear, and all the other family sponsors who make racing at this level possible. Jak is now looking forward returning to Sonoma, California once again for the second round of the SuperKarts! USA Pro Tour.