MARANELLO KART ON THE PODIUM WITH NICOLAS GONZALES IN GUADALAJARA 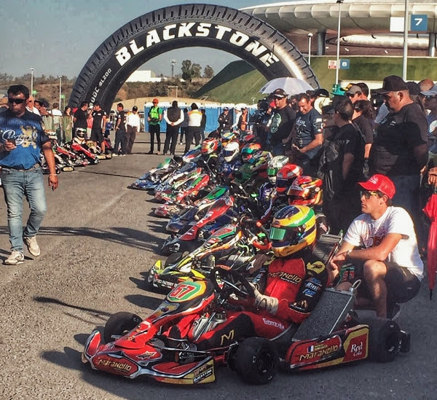 Nicolas Gonzales had a great debut on Maranello Kart in Mexico at the international race GPI Wing’s Army, where he led Team Sidral Aga’s equipment to the third place of the podium. Full haul for Maranello Kart in DD2 Master.

Maranello Kart put in a great performance in Mexico at the important international event GPI Wing’s Army, race held in Guadalajara. Nicolas Gonzales, at the debut with the Italian outfit, took a deserved podium ending the Final in P3.

The first experience of season 2017 has been very positive for the young French Nicolas Gonzales, who made it to the track thanks to the support of Maranello Kart’s importer for Mexico Salvador Bortoni of BMS (Bortoni Motor Sport) among the ranks of the Mexican team Sidral Aga.


Gonzales, who has been assisted by Alberto Cavalieri as coach, has been shining in GP1 since qualifying when he set the pole position, before keeping his momentum winning a heat and closing the other in second position.Gonzales could have been second in the Final had he not been slowed down in the heat of the race, but eventually claimed a great third place behind Paolo De Conto and Jonathan Thonon.

Adolfo Anguiano of Team Sidral Aga was sixth on Maranello in GP4.

MARANELLO KART TAKING ALL THE PODIUM OF DD2 MASTER

Rotax DD2 Master has also been run in Guadalajara. Maranello Kart locked out the whole podium with the Mexican Carlos Medina of Team Falcone GP taking the victory, leading the American Darren Elliot of Team Sidral Aga and the other Mexican Alvaro Zambrano of Falcone GP. Another Maranello driver ended on the podium of Junior: the Mexican Inigo Leon was in fact second, while Regina Sirvent ended sixth.


Maranello Kart wishes to thank Salvator Bortoni and Team Sidral Aga for the dedication and the great work accomplished. The racing programme ofNicolas Gonzales will continue with the Andrea Margutti Trophy, race to be held next March 26th in Lonato and with the other CIK-FIA international events. Alberto Cavalieri will get on track next February 19th for the Winter Cup of Lonato, alongside Tommaso Mosca and Gleb Shapovalov.