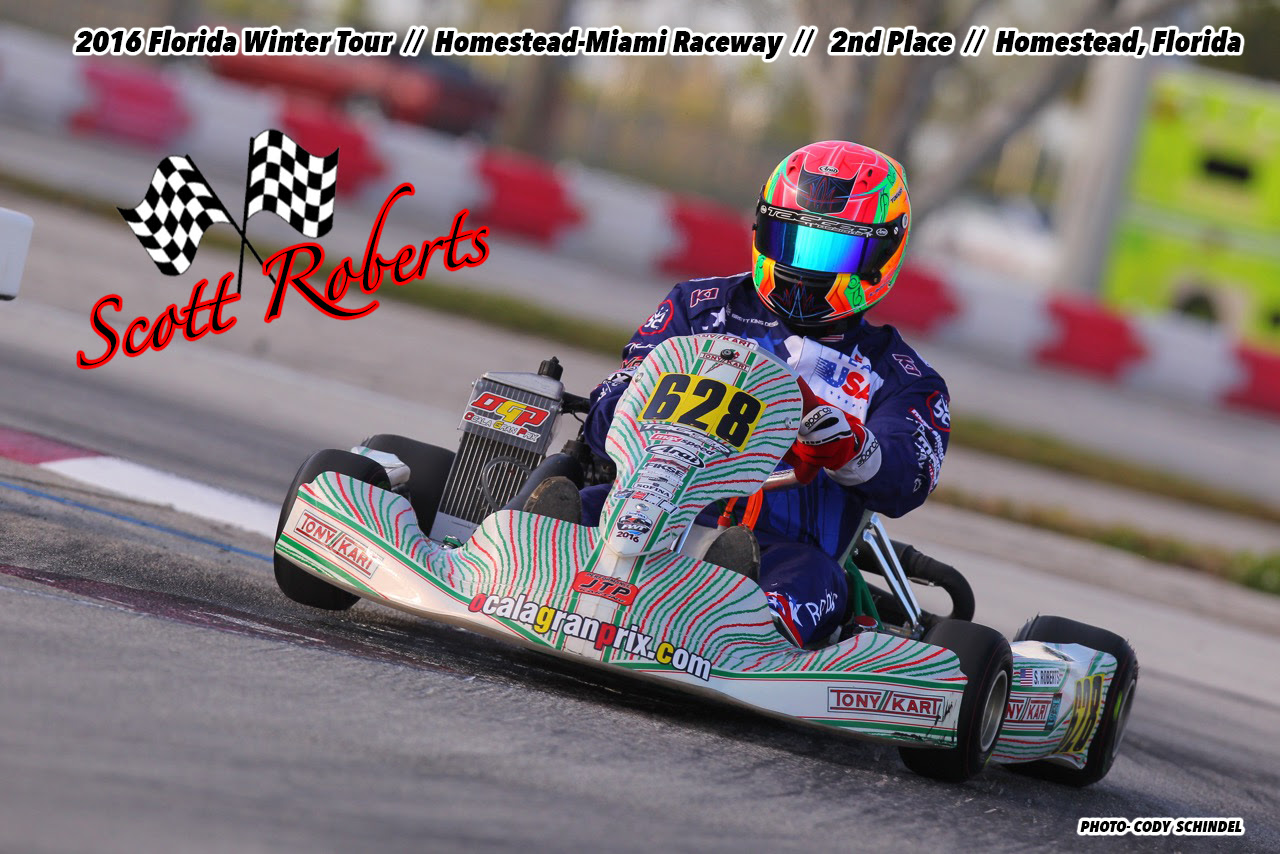 0
0   0
Roberts is setting high goals for himself in 2016, competing in every round of the Florida Winter Tour this year in 2016 in the Rotax Masters division. Roberts has prepared himself in the off-season and is looking for the overall win and his ticket to the Rotax MAX Challenge Grand Finals in 2016. Roberts also plans to defend his US Nationals title later on this year in California at the US Rotax Grand Nationals in August.
Friday
With horrible weather and rain all day that left the track looking more like a lake, officials were forced to call for no racing and move everything to Saturday with qualifying and three heat races.
Saturday
With not much testing under his belt due to the weather on Friday, Roberts qualified third putting himself in a good starting spot for the three ten-lap heat races later on that day.
The heat races got underway with perfect weather and blue skies. At the front it could be anyone’s race with the top three drivers within two tenths of each other. With tight racing and several passes for the top position in every heat, Roberts finished third in heat one, first in heat two and third in heat three. This would put him on the front row and a starting spot of second place for the prefinalon Sunday.
Sunday
Roberts would start the prefinal on the outside of row one. With lots of rubbing and banging at the start in turn one, Roberts would finally get back in line in about the fifth spot. As the leaders stretched out the lead on lap one, Roberts had some ground to make up but he also had plenty of time with 15 laps in the prefinal. Roberts worked his way back to the third position and that is where he would finish.
With driving infractions for kart #602 Rafa Matos, who finished in front of Roberts in the prefinal and was sent to the back of the field for the final, which put Roberts on the outside of row one for the final. At the drop of the green flag in the final, Roberts looked to be aggressive and went into turn one side by side with the leader. By turn five Roberts took over the lead and tried to stretch his lead out. Roberts lead for about four or five laps but the pack was not letting him run away. With a 25-lap final, the pack had plenty of time to catch him and they did. Around lap ten, Christophe Adams got around Roberts for the lead and never looked back. With tight racing for the second, third and fourth positions, this let Adams stretch out his lead and make it that much harder to be caught. With Roberts in second and a small gap back to third, the top three drivers matched each other’s lap times and this is where they would finish. Christophe Adams scored the win, with Scott Roberts in second and Michael Aboissa in third.
“I’m looking forward to rounds two and three after seeing the racing competition round one!” exclaimed Roberts.
tags: SCOTT ROBERTS
previous Tanda Racing Announces 2016 Arrive-and-Drive Program
next RIGHT THE FIRST ONE: CRG WINS THE ROTAX DD2 IN VALENCIA