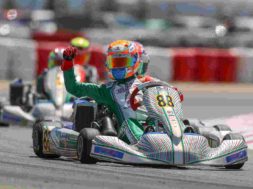 Axel Charpentier and Nicolas Schoell have long looked like future stars and at Zuera Strawberry racing’s dynamic pairing delivered in style to provisionally lift the Junior and Senior Max titles at the third round of the Euro Max Challenge (24 July).


In fact, such have been their performances this year that they were able to put their respective titles beyond their rivals’ grasps with a round to spare.

Mark Kimber spearheaded the team’s quest for success in the Junior Max class with the 3rd-fastest time in qualifying, one place ahead of Charpentier, while Connor McCarthy found himself down in 22nd place.


The racing would be dogged by contact and time penalties for misaligned front fairings. Kimber was the first to suffer in the opening heat, eventually classified in 22nd spot after incurring a 5-second handicap. In the second race, Connor fell foul of the authorities for partly leaving the start corridor. He recovered to 18th, whilst Axel took the win and Mark crossed the line 3rd. The trio avoided any censure in the 3rd heat, with Kimber leading Charpentier home and McCarthy 23rd.

Having avoided any penalties whilst racking up two wins, Axel duly took pole for the 1st final. Mark lined up on P5 with Connor going off grid 24.

The incident packed pre-final saw the stewards busily issuing nine post-race penalties, with Connor again summoned to the Clerk’s office for a dropped front fairing. Axel however had endured no such sanction and took the win from Kimber.


He doubled up in the main final, with his second victory also deciding the championship in the Strawberry driver’s favour. A hard-fought race concluded with Mark completing the podium – and cementing his runner-up position in the points table. Connor’s frustrating weekend continued with an eventual 21st place.

Although one corner of the Strawberry awning was already celebrating, Nicolas Schoell and his supporters were quickly doing sums trying to work out what he needed to do in order to secure the Senior Max challenge. The rapid Austrian had been the model of consistency throughout the heats, taking three straight 4th-place finishes and was rewarded with P3 on the pre-final grid. Ireland’s Gary Donnelly was harbouring his own title ambitions, so could be forgiven for being a little anxious with his mid-grid start; just one place ahead of Jack McCarthy, who would start in 14th.

Schoell struck gold with a terrific win, while Donnelly charged up the order – making up ten places – to take the chequered flag in 5th position. McCarthy fell victim to the ubiquitous front fairing penalty and was ranked in 20th.

A canny drive in the main final saw Nicolas avoid the dramas and rough-house tactics to settle for 5th and the provisional title. Not only that, it was an early birthday present to himself, as he turns 15 a fortnight after the event: technically making him the youngest ever Senior Euro Max Challenge winner. Gary’s 8th allowed him to net sufficient points to carry the fight for second in the championship to the finale in France. Jack salvaged some pride with a gutsy drive to 9th and will look to sign off his campaign with success at Salbris.

Strawberry’s DD2 duo, Sam Smelt and Aaron Sherlock figured prominently in the twin-geared class, taking a string of top ten finishes between them in the heats.

In the pre-final, Sam flashed across the line in 6th, whilst Aaron was 11th. In the main final, they were pushed back into the midfield, with Aaron another victim of the 5-second front fairing penalties.

Savouring the team’s sixth Junior and fifth Senior Euro Max titles since 2009, Team Owner Paul Spencer said: “First, I’d like to congratulate Axel and Nicolas  for the excellent job they’ve both done. Sure, we played our part by giving them the equipment and support to give them the best chance of fighting for wins but it ultimately it came down to the two lads individually. We have a good chance of Mark and Gary taking 2nd overall, in the last round in France. Hopefully, we’ll be enjoying a Strawberry Racing 1-2 in both classes but we have to earn that success, it won’t be given to us.”