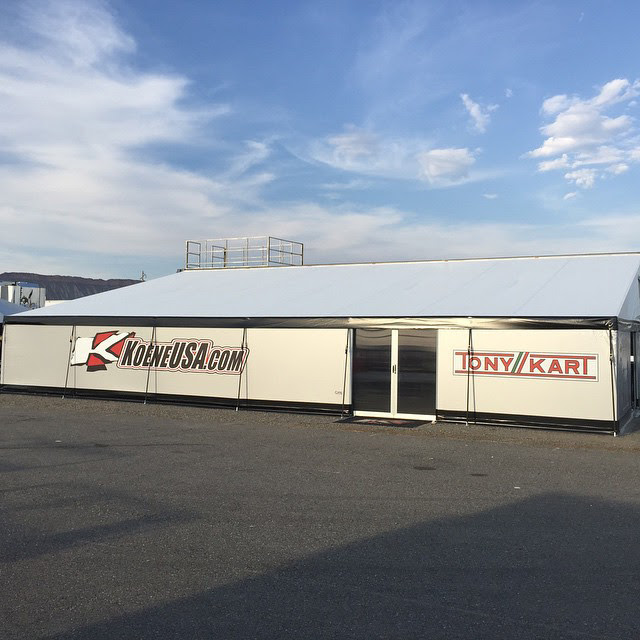 0
0   0
“Estep and Ugochukwu lead championship battles in their respective classes”
October 14, 2015 – As one of the most dominant teams at the first two rounds of the MAXSpeed Entertainment promoted Cold Stone US Open program, Team Koene USA is set to take on Las Vegas for the finale weekend of the inaugural US Open year. Competing at the first two events with a talented group of eight drivers, Team Koene USA will enter ten competitors at the final event weekend hoping to claim race wins, podium results and championships, as well as 2016 Rotax MAX Challenge Grand Finals tickets.
“The Las Vegas finale has been a race on our radar for quite sometime,” explained Koene USA Team Principal Mike Maurini. “With Rotax MAX Challenge Grand Finals tickets on the line and two of our drivers leading the championship points battlein their respective classes, we are looking to finish the US Open program strong.”
Trenton Estep leads the championship battle in Rotax Junior as he has claimed both main event victories to date this season by topping the blocks in Dallas, Texas and Grand Junction, Colorado, thus earning his ticket to join Team USA in Portugal later this year. Always a threat and in contention for the win, Estep will look to make it a perfect season over the Halloween weekend in Las Vegas. Joining Estep in the junior division will be class rookie Michael d’Orlando who is fresh off his Colorado podium result. Gaining experience and speed with each passing race weekend, the elder d’Orlando is poised to pounce on another podium result or potential race win.
Traveling from Europe for the US Open finale will be the brother duo of Andreas and Sebastian Estner. The two German drivers will see wheel-to-wheel action in Rotax Junior as they will look to steal the show and stand atop the podium. With 2016 Rotax MAX Challenge Grand Finals tickets on the line, the Estners, as well as the rest of the Team Koene USA drivers will look to be the first competitors qualified for the yet-to-be announced 2016 Rotax MAX Challenge Grand Finals. Hailing from Germany and competing with the RS Competition squad overseas, the Estners compete in the Rotax MAX Challenge Germany and Rhein Main Kart Cup Germany programs. Having success more often than not, the brothers currently sit first (Andreas) and second (Sebastian) in the Rhein Main Kart Cup series, and are fighting for end of the year championship podium results in their Rotax MAX Challenge campaign. Not shy from international events, Andreas and Sebastian have also competed in the Rotax Euro Challenge with great success.
Rinus Van Kalmthout, fresh off claiming a ticket to the 2015 Rotax MAX Challenge Grand Finals at the Rotax Euro Challenge, enters the final round of the US Open sitting third in the Rotax Senior championship. Showing speed throughout the year, Van Kalmthout has battled with and beat some of the top Rotax Senior pilots throughout the world at only 14 years of age. Looking to do the same in Las Vegas, now 15 years old, the Dutch pilot will try and stand atop the podium and claim the championship before heading back to Europe to begin preparations for the Rotax Grand Finals event in Portimao, Portugal.
In the Rotax Micro Max division, it is Team Koene USA driver Ugo Ugochukwu that has the target firmly placed on his back as he currently leads the overall series championship race. After dominating the Dallas round and finishing on the podium in Colorado, Ugochukwu will look to carry the momentum to Las Vegas and secure the overall series title as one of, if not the youngest driver in the class. Joining Ugochukwu in the Micro Max class is the young female phenom of Sofia Zanfari. After not being in the kart for quite sometime, she quickly got up to speed with a top-ten result at the opening round. Bad luck in Colorado ruined any chances of a good finish but experience gained will help her on the temporary course in Las Vegas.
Three Team Koene USA drivers will enter the Rotax Mini Max class and all three sit in the top-ten in the US Open championship point standings. Nicholas d’Orlando and Payton Durrant have been on the podium during the first two event weekends with Durrant taking the win in Dallas and d’Orlando coming home third. In Colorado, d’Orlando crossed the line in the second position while Durrant ended his weekend on the podium in third. Entering the final round in Las Vegas, d’Orlando sits second and Durrant third in the championship chase. With several points on the line and the action of a temporary circuit, both will be in position to battle for the race win and overall series crown.
The sleeper in the Team Koene USA Mini Max program could be the Moroccan driver, Suleiman Zanfari. With a seventh place finish in Dallas and just outside the top-ten in Colorado, Zanfari has shown the speed to run at the front of the field, often outpacing the leaders. Gaining experience and scoring solid results in Europe, the Lotus supported driver will look to turn his luck around in his final event stateside in 2015 before shifting his focus to an intense 2016 program.
Following the US Open Finale, Team Koene USA will look towards the Superkarts! USA (SKUSA) Fikse Wheels Pro Tour SuperNationals. With a strong field of eleven drivers already confirmed, Team Koene USA will look to double the jackpot in the Nevada desert.
tags: koene usa tonykart
previous 2015 Sanzaru Games Karting Champ to receive a World Speed Rising Star Award, and an Invitation to the VMB Driver Development Shootout
next 2016 AKRA SERIES TO KICK OFF WITH DOUBLEHEADER MARCH 18-20 AT CAROLINA MOTORSPORTS PARK