Another positive experience at La Conca For Birel Art 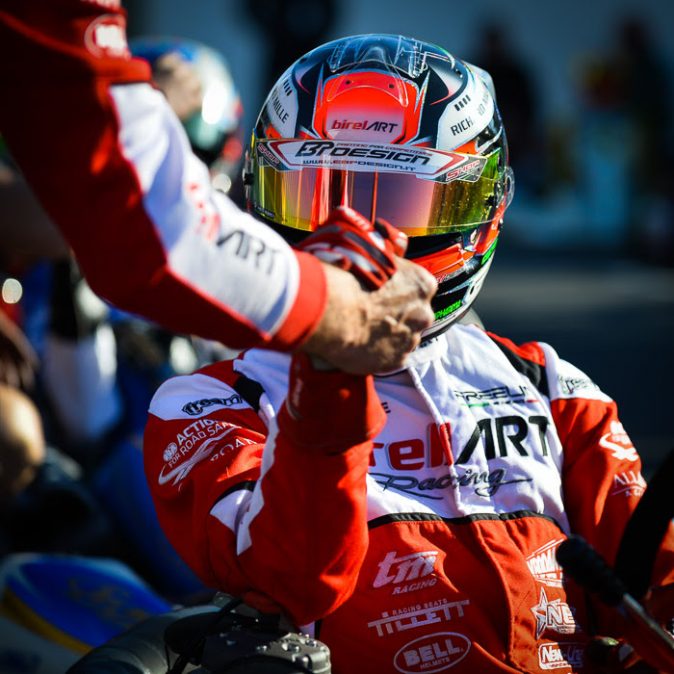 The third round of the 2017 WSK Super Master Series, which took place in the extreme south of Italy, provided very interesting conditions for the Birel ART Racing Team to develop its equipment. It was indeed the first time of the season that a competition was held entirely in sunshine with temperatures close to 20°C and good grip. The team was able to work in new directions and record very useful data for the rest of the season, while overall performance continued to improve.

Rickard Kaell Franchini, the team manager, takes stock of the Muro Leccese meeting: “Our drivers performed very well throughout the weekend. Despite their lack of experience, the Juniors showed speed that was very encouraging for the future, and also indicative of the quality of the Birel ART chassis and the TM Racing engines. The speed was also there in KZ2 with a particularly competitive package which allowed Marijn Kremers and Andrea Dahlberg to shine. In OK, we tested different configurations to adapt the settings to the change in the grip with Bridgestone tyres. We will draw lessons from this race to determine where we need to step up our efforts. Our very good collaboration with TM Racing and our tuners enables us to make significant progress.”


Caio Collet’s excellent time in Qualifying in the OK class allowed him to rank 4th, only 38 thousandths from the pole position. While the team was working hard to find the right set-up when the track lost a bit of grip, the young Brazilian driver managed to stay on the pace and finish at the gates of the top 10. Simon Ohlin (Ricciardo Kart) finished a good Prefinal in 9th position, while Rasmus Lindh (Ricciardo Kart) finished 7th. The performances of Michael D’Orlando in the final stages deserve to be highlighted. Despite a difficult run in the qualifying heats, the American driver managed to qualify for the Final where he was 15th at the end of a 16-place climb.

After setting the 9th time in Qualifying, Felice Tiene met many obstacles until his retirement in the Prefinal, caused by the breakdown of the water pump belt. Marijn Kremers started with 7th place in Qualifying and finished 12th with six places gained in the Final, all accompanied by very good times. Similarly, Andrea Dahlberg was more comfortable in the final stages, finishing his progress in 15th. The fact that these two young KZ2 drivers are confronting the best specialists of KZ in WSK makes it possible to better appreciate their true value.

The position of Dexter Patterson in the top 10 of the Final of the OK-Junior category (9th) reflects the current level of competitiveness of the Birel ART TM Racing engines. The Famularo brothers also recorded some great performances this weekend: very fast, Alessandro would have finished 11th in the Final without a spoiler penalty; Anthony could not defend his chances because of a crash at the start of the Prefinal. As for Pietro Delli Guanti, a rib injury did not allow him to finish, the aim is above all for these promising youngsters to enrich their experience in the best conditions, an area where the Birel ART Racing Team also excels.


The next WSK Super Master Series will take place from 6th to 9th April at the Circuito Internazionale Napoli at Sarno, where the inaugural event of the OK, OK-Junior and KZ European Championships will take place two weeks later.