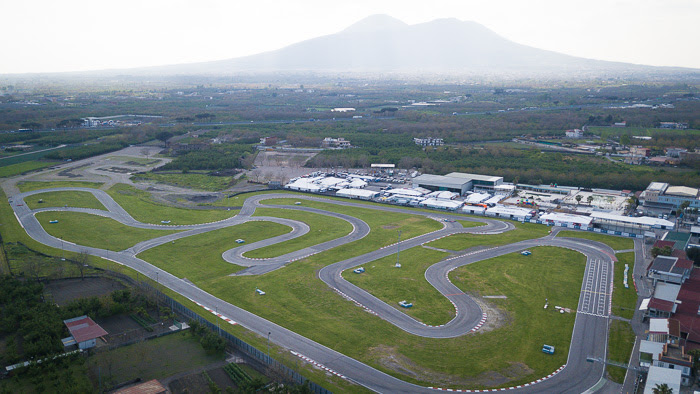 The CIK-FIA European campaign began this Friday, 20th April, 2018 on the 1547m Circuito Internazionale Napoli of Sarno (ITA) in good weather with temperatures above 25°. As some of the favourites, two Ricky Flynn Motorsport Team Drivers, Paul Aron (EST) and Zane Maloney (BRB), had the fastest times in their respective categories, OK-Junior and OK.

With 80 Drivers present in OK and 78 in OK-Junior, the field reached the respectable figure of 158 participants for the first of the four Competitions of the CIK-FIA European Championship and the European Junior Championship. The last two official Free Practice sessions set the tone, with competitors able to exploit track conditions close to those that awaited them for the Qualifying Practices, with new tyres, from Vega in OK-Junior and Bridgestone in OK. The six decisive sessions then alternated the categories to ensure the greatest possible fairness between all participants. On the fast track of Sarno, the management of the slipstream phenomena was a key element of the result. And all the more so as the Drivers only entered the track four minutes before the end of the eight minutes and had at most only two quick laps to shine. Fortunately, no significant variation in track conditions was recorded during this phase.

Aron on pole in OK-Junior

Paul Aron (EST) was fastest in the first session ahead of Dino Beganovic (SWE) and Laurens Van Hoepen (NLD). Victor Bernier (FRA) dominated the second session with 59”754 ahead of Adam Putera (MYS) and Han Cenyu (CHN), while Kai Askey (GBR) headed the third session with a lap of 59”617 against Conrad Laursen (DNK) and Kirill Smal (RUS).

Aron kept the pole position of the category to the end with a time of 59”597, only two hundredths of a second ahead of Askey and 85 thousandths better than 3rd, Beganovic. Laursen and Smal completed the top five in that order.

Pole position in OK for Maloney

Roman Stanek (CZE) opened the scoring in the OK category by being the fastest in the first session – 57”206 – followed by Hannes Janker (DEU) and Mattia Michelotto (ITA). However, Zane Maloney (BRB) made the difference in the second session with his time of 57”162, relegating David Vidales Ajenjo (ESP) by a tenth of a second, ahead of Hugo Sasse (DEU). Harry Thompson (GBR) approached the benchmark time with his 57”170 in the third session, followed by Dexter Patterson (GBR) and Noah Milell (SWE).

In the overall standings, Maloney took 1st place ahead of Thompson and Stanek, then Patterson 4th and Janker 5th.

The day ended with a press conference organised under the new CIK-FIA Competition Promoter RGMMC Group reception structure, with the top three in the OK and OK-Junior Qualifying Practice.

In search of qualification among the 34 finalists of each category, on Saturday, 21st April the Drivers will compete in four of their five Qualifying Heats during the 24 races of a busy day.

The Competition is available via live timing and live streaming on www.cikfia.com.