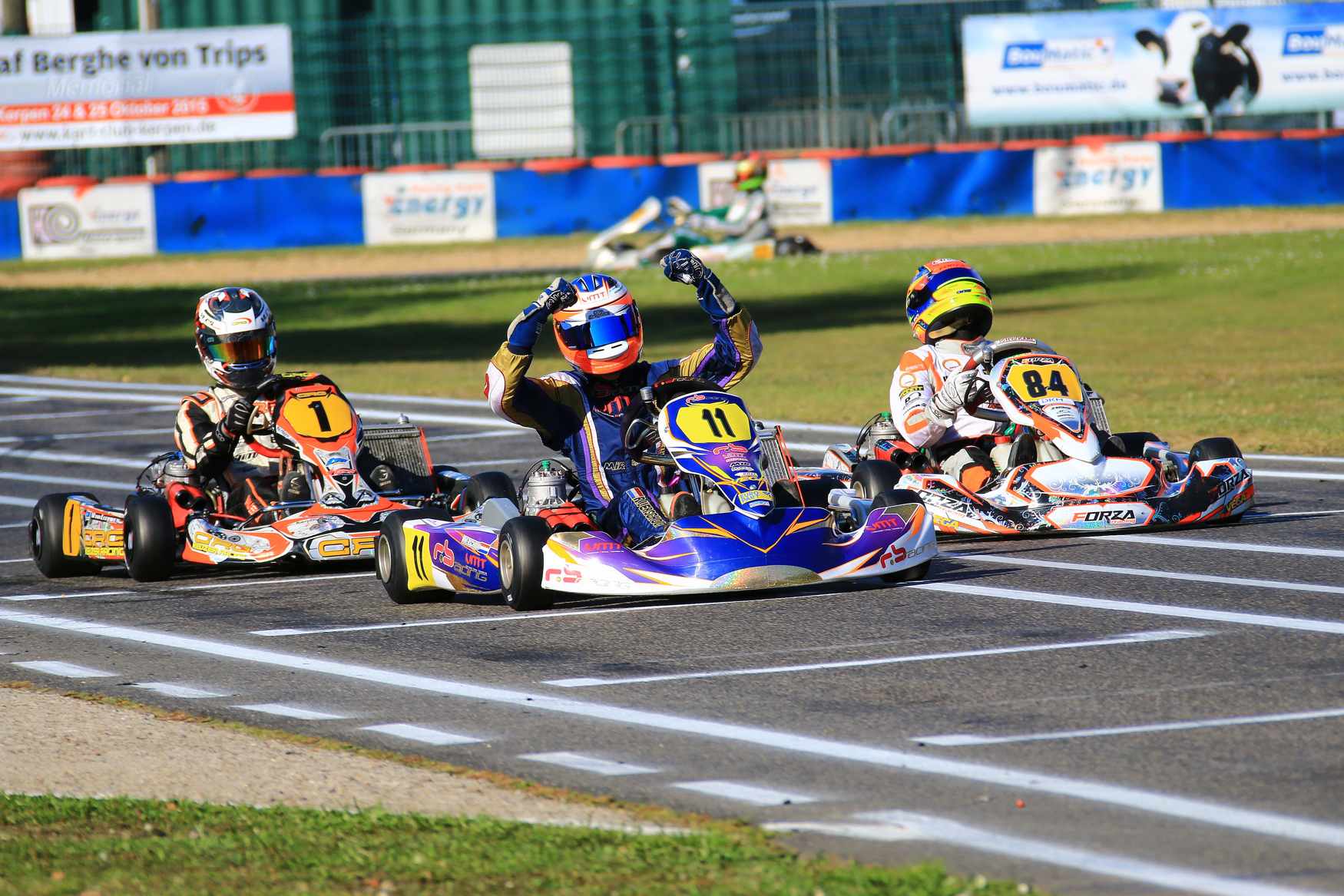 Exciting final races in the Erftland
The conditions at the finale of the German Kart Championship in Kerpen couldn’t have been any better. The drivers of all three grade series fought for the championship titles in bright sunshine. In the end, Alexander Schmitz (DSKM), Bent Viscaal (DJKM) and Richard Verschoor (DKM) prevailed.

During the first weekend of May, the kick-off to the German Kart Championship season 2015 took place in Wackersdorf. After that, the participants from more than 20 nations travelled to Genk (Belgium), Ampfing and Oschersleben. The big finale now took place on the 1.107m long Erftlandring in Kerpen.

In great autumn weather, the fights for the title were still open in all three classes which promised two exciting racing days. In front of filled-up spectator seats the drivers showed hard but fair fights.

In the end, the titles were won by Alexander Schmitz (DSKM), Bent Viscaal (DJKM) and Richard Verschoor (DKM).

Series coordinator Stefan Wagner came to a completely positive conclusion on Sunday: “We can be very content with the course of the season. It’s been a lot of fun and the narrow title decisions underline the power density in our classes. I want to thank all drivers, teams, organizers and hosts for their commitment. The feedback among the paddocks is very positive. In 2016 a new era is going to begin due to the OK-engines, which we’re really looking forward to.”

Three drivers travelled to Kerpen with chances of winning the title and were able to underline their ambitions during qualifying already. While John Norris (Mach1 Motorsport) achieved pole position, the championship aspirants Jorrit Pex (Pex Racing Team), Alexander Schmitz (KSM Racing Team) and Davide Foré (Renda Motorsport) ended up on second, third and eighth places. During the course of the heats Pex managed the jump to the front: Due to a victory and a second place he was the best driver in the evening. Behind him followed pole-setter John Norris in front of Davide Foré. Alexander Schmitz had some bad luck: He was involved in a collision during the second heat and fell back to fourth place of the interim standings.

From pole position, John Norris achieved the best start of the first finale and initially led the field. Davide Foré passed him by after only two laps though and secured the victory. In the meantime Pex lost more ground: In addition to the Italian he also fell back behind John Norris and Alexander Schmitz to fourth place. These two changed their positions during the last lap. Due to Foré’s victory the championship stayed open though. “The double falling out in Oschersleben threw us back. Now I can only try to win and have to hope that Alexander won’t gain too many points”, the Italian explained his situation. The dream of his fifth title was already over for reigning four-time Champion Jorrit Pex though. Due to his fourth place the space between him and the leading drivers was too big.

The finale of the DSKM could hardly have been more thrilling. Due to a perfect start Davide Foré was able to defend his top position and drove off with Jorrit Pex in tow. John Norris got closer from the field of pursuers though and gained the lead. There was no ease at the front though – six drivers temporarily fought for the victory. Stan Pex (Pex Racing Team) provided a surprise in the end. He fought his way forward from 11th starting position and profited from the fights for positions between his brother Jorrit, Davide Foré and John Norris. The youngster was then unstoppable at the front and celebrated his first success at the German Shifterkart Championship. Davide Foré followed on second place in front of Alexander Schmitz, who thereby brought the DSKM-title back to Germany after 2006. “Things really went topsy-turvy during the race. I’m very happy and proud of winning the title.

I’d like to thank the whole team for their support and the competitive racing material”, Schmitz rejoiced at the finish line. Dylan Davies came in on fourth place in front of Kevin Pieruszek (KSW BirelART Autria). Benjamin Tornqvist ended up on sixth place in front of Guust Specken (PDB Racing Team), David Detmers, André Matisic and Tobias Müller (Kartshop Ampfing). Jorrit Pex and John Norris had to deal with fallings out: They collided and had to end the race nine laps early.

At the juniors, there was a first surprise after qualifying already. The two title favorites Bent Viscaal (KSM Racing Team) and Max Hesse (RS Motorsport) only ended up on eleventh and twelfth starting positions. Things didn’t go too smoothly for the both of them during the heats as well. Viscaal was on seventh place on Saturday evening, Hesse only on 15th place. Russian guest driver Alexander Smolyar (Kartprom Team) prevailed at the top. After gaining pole position during qualifying he won both heats as well. Behind him, Max Tubben (CRG Holland) from the Netherlands and best German driver David Brinkmann (KSM Racing Team) completed the top three.

The Russian pole-setter achieved the best start during the first finale as well and was able to increase his lead in the beginning. Championship title-favorite Bent Viscaal fought his way forward from the field of pursuers though. He got close to the leading driver and took the lead seven laps before the end of the race. Initially he gained a little advance, but Smolyar used a small gap on the last few meters and achieved the victory. Bent Viscaal came in on second place and still had a good reason to rejoice. Due to the fact that Smolyar didn’t gain any points as a guest driver, Viscaal gained 25 championship points and thereby provided a preliminary decision in the fight for the title. “After yesterday’s qualifying things didn’t look too good, but we’ve managed to turn things around and have now won the championship. Changing the team at the beginning of the year has really paid off”, the Dutchman rejoiced. Noah Milell (JP Racing) kept close and achieved third place in front of Max Tubben (CRG Holland) and Emil Dose (Storm Development). Viscaal’s sole championship opponent Max Hesse (RS Motorsport) only came in eighth after David Brinkmann and Charles Weerts. Ninth and tenth places went to Aleksi Potter (Ricky Flynn Motorsport) and Luca Lippkau (RMW Motorsport).

Despite the preliminary championship decision, the second final race of the juniors was no less exciting. Alexander Smolyar won the start again, but had to fight against Noah Milell and Emil Dose throughout the entire race – the lead was changed numerous times. At the finish line, Swede Noah Milell came in first and celebrated his first victory of the season. Second place went to Alexander Smolyar followed by Emil Dose. Regarding the fight for fourth place, Max Hesse held all the cards for a while but fell back to sixth position behind Max Tubben and Charles Weerts in the end. Tubben received a ten-seconds-penalty though and was only ranked on eighth place. New sixth winner was champion Bent Viscaal in front of Luca Lippkau. Guest driver Felix Scholz (KSM Racing Team) achieved ninth place during his DJKM-premiere while Phil Hill (TR Motorsport), another rookie, ended up on tenth place.

The drivers of the DKM already proved during qualifying that this weekend, everything was at stake. With a tactical masterstroke Martijn van Leeuwen (CRG Keijzer Racing) tried to intercept his direct opponent Richard Verschoor (RB Racing). Verschoor couldn’t be shaken though and achieved pole position. From first starting position he was then unstoppable during the heats as well and won twice. Directly after him followed his fellow title favorite Martijn van Leeuwen on the day’s list of rankings.

On Sunday the stars of the DKM continued their fight for the title during the first final race. The two title favorites showed a thrilling fight at the front of the field. The duo changed the lead six times until a small collision happened seven laps before the end of the race. Verschoor fell back to fifth position due to this and came in fourth in the end. At the front, van Leeuwen made use of his chance and achieved the race victory. Directly behind him his team mate Will Stowell (CRG Keijzer Racing) came in. A ten-seconds-penalty threw the Brit far back though. New second winner was German Moritz Horn (TB Motorsport Racing Team) in front of Richard Verschoor, Christian Soerensen (Storm Development) and Tom Lautenschlager (TB Motorsport Racing Team).The first ten positions were completed by Kush Maini (Forza Racing), Andreas Jochimsen (Storm Development), Manuel Valier, Julias Lassen (TK Racing) and Shane Vandenbroek (DAEMS Racing Team).

In the championship the two Dutchmen had the same amount of points again after the first race and postponed the final decision until the very end. Martijn van Leeuwen had the perfect initial position: Due to his victory at the first race he started from pole position and achieved the best start too.

Verschoor kept very close though and passed him by due to a great maneuver. The Exprit driver was able to drive away from his direct championship opponent, but a race-stop brought the field closely together again. After the restart, Verschoor was able to defend his top position though and secured the DKM title by winning the race. “This weekend has been a real thriller – everything was really close until the end. It was enough though and I’m very proud of winning the DKM”, the new champion said in the evening. Guest driver Kush Maini fought his way forward to second place and tried to intercept the leading driver during the last lap – but he kept his nerves. Martijn van Leeuwen followed on third place in front of Andreas Jochimsen and Tom Lautenschlager. On the further ranks followed three German drivers: Manual Valier, Moritz Horn and Jonathan Judek (KSM Racing Team).

Will Stowell showed a strong catching-up race: He drove up to ninth place from the back rows. Swede Jessica Backmann (Kosmic Racing DPT) came in tenth.

An exciting German Kart Championship season ended with the race in Kerpen. The team is already working fiercely on the 2016 season. The dates are going to be announced soon.