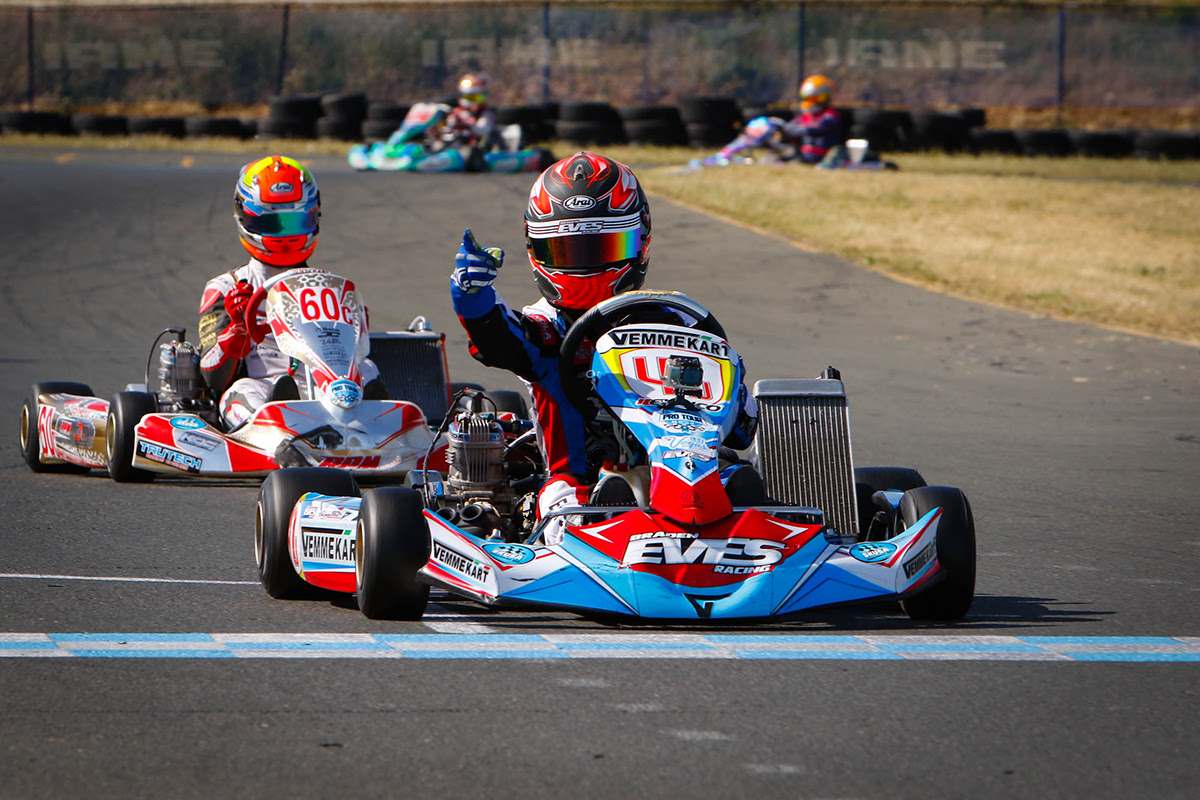 Vemme Kart came home victorious in X30 Senior with team driver Braden Eves at the SuperKarts! USA (SKUSA) SpringNationals, May 5-7th in Sonoma, California.  The team debuted their new 2017 Vemme America 30mm chassis at the third and fourth rounds of the SKUSA Pro Tour, receiving strong results from all team drivers, including an impressive win in one of the most competitive classes at the event. Taking place at the challenging Simraceway Performance Karting Center, Eves and Vemme Kart would top the blocks during Sunday’s main event and end the weekend on a high.
“It was a great weekend for Vemme Kart,” explained chassis designer Vince Mandarino. “We have worked on the North America specific chassis for quite some time and were comfortable enough with our progress to enter the SKUSA event. The hard work, long hours and countless nights of sleep paid off as Braden Eves was able to score the biggest win for Vemme Kart to date. We can’t wait until the next rounds of competition.”
Braden Eves drove his Vemme Kart to victory in the X30 Senior field. After running in the top-15 throughout the day on Saturday, Eves knew he had more to give on track. With hard work from the team and his mechanics Greyson Eves and Vince Mandarino, Eves came back on Sunday with the speed he needed to excel. Working his way to the front of the field from a 13th place qualifying position, the young talent took home the win on his 2017 Vemme America chassis.
Stepanova Nekeel also piloted his Vemme chassis in the X30 Senior category scoring a 13th place finish in Saturday’s main event after driving from the back of the field from a DNF in the prefinal. On Sunday, Nekeel started his day off with a poor qualifying run but not letting his bad luck bring him down, he made an incredible comeback in the main event, crossing the line just outside the top-ten in the 11th position.
Terry Lawrence also had a solid weekend run in the S4 division. This was Lawrence’s first time racing in Sonoma, and his second race on his Vemme shifter chassis. After a DNF in Saturday’s prefinal, Lawrence came back and earned a sixth place result in the day’s main event. Sunday also brought him a strong result, scoring a third place run in the prefinal and a top-ten finish to close out the SKUSA Pro Tour weekend.
VemmeKart would like to thank everyone that helped achieve these great results this past weekend. The hard work done in Europe is starting to show and the new 30mm Vemme America chassis has now reached a high level of performance. For more information on VemmeKart, please contact Jay Howard’s Motorsport Driver Development at Jay@jayhoward.com or by phone to 504- 756- 6459.
tags: 2017 BRADEN EVES SKUSA Pro Tour superkarts vemmekart Vince Mandarino x30
previous CRG HEADING TO GENK FOR THE EUROPEAN KZ AND KZ2 CHAMPIONSHIP
next CRG, STUNNING DE CONTO IN GENK’S HEATS VALID FOR THE KZ EUROPEAN CHAMPIONSHIP