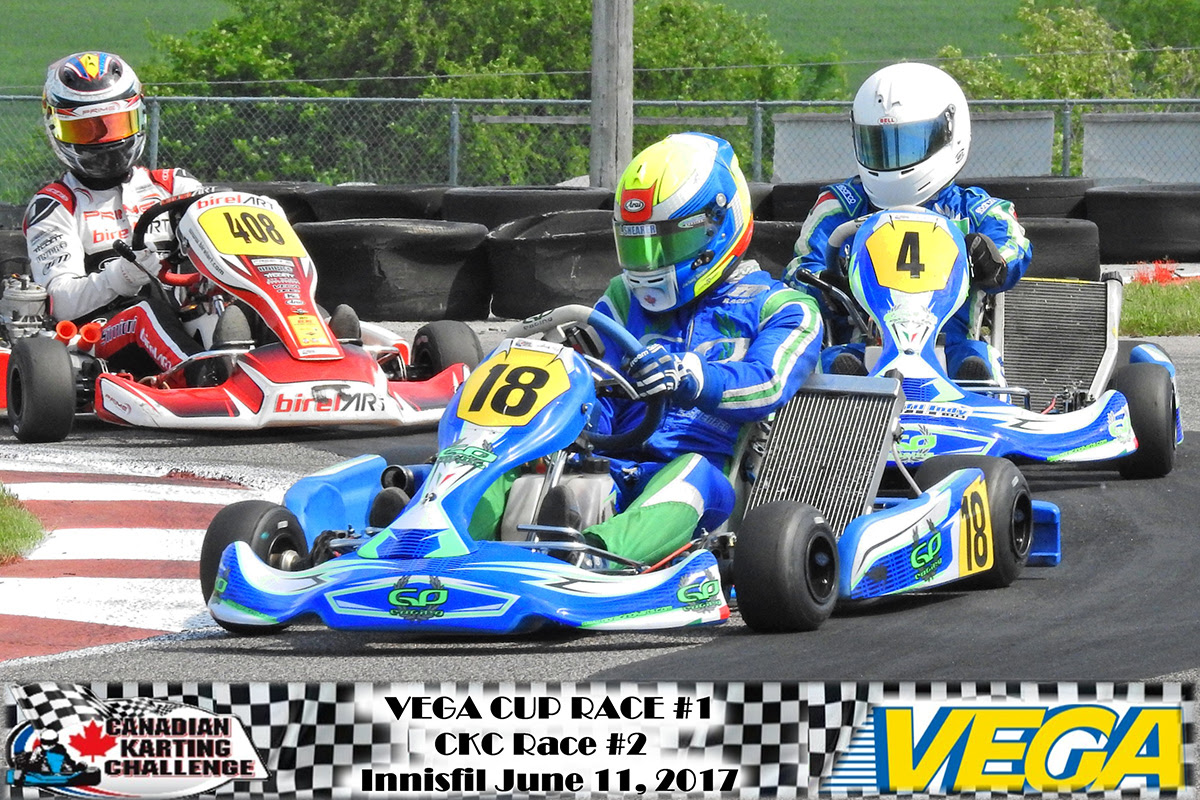 Hosted by Innisfil Indy, round two of the Canadian Karting Challenge (CKC)
was held June 11 and saw a great day of competitive racing. Also featuring the debut of the Vega Cup for shifter classes, drivers took to the challenging Launi MindBender Uphill layout amid the fun and gracious hospitality of the Innisfil facility.
“It was a great day with heavy, competitive racing, and lots of bumping and grinding to get to the front of the pack,” explains Innsifil’s Tony Launi. “Innisfil has maintained a shifter following for the last six years, and we have seen continued growth in Junior, Senior and Masters. Shifters never left Ontario, and I am glad to see a shifter-specific series in the Vega Cup come to fruition through Daniel DiLeo’s and my vision to continue to grow shifter classes throughout the region.”

In TM KZ Junior, Simone Masini and Stefano Lucente battled for the win, with Masini coming out the victor. Nicky Palladino completed the podium. Gianluca Savaglio placed first in the ROK Junior category, which ran combined with the junior shifters.
TM KZ Senior saw Marco DiLeo (Intrepid) come out on top of a solid field, with drivers getting to know the light system after three failed starts. Zachary Shearer (GP Kart) claimed second place honors for Vega Cup #1, while Frank Launi went from last to third to complete the podium. Running in the combined class with the senior shifters, ROK Senior first place went to Ethan Simioni, followed by Davide Greco in second and Joshua Conquer in third.
Jimmy Lo took top honors in TM KZ Master, with Tony Demarco and Daniel Uruena completing the podium.
In Briggs classes, Zachary Vanier came out on top in Novice/Junior Briggs, followed by Jac Young and Owyn Thomas. Vassil Tchiplakov and Eli Yanko placed first respectively in the combined Senior/Master Briggs category. And in Micro Max, Joseph Launi topped with podium with Antonio Ferrari second and Jordan Smith third.
“We enjoyed having everyone here for our CKC Race #2 and Vega Cup #1,” continues Launi. “We had lots of attendees that commented on our facility and how much they enjoyed it. We hope to see even more drivers out for our next event, July 8 at Mosport for both Canadian Karting Challenge and Vega Cup. We have a lot of amazing prizes on the line for our series drivers!”

CKC prizes include:
Briggs Classes
Shifter Classes
Finally, a special thank you is extended to Steve Auger and Josh Munn for doing running Tech, Emilo Bonifazi for Grid, Paul Harlow the Race Director, Roy Monteiro for taking the time to take some amazing photos of the drivers as well as everyone else who makes the series events possible. Also, a big thank you to event sponsor Andrea Masini & Ultra Coat Industries for race and drivers lunch. The CKC is thankful for your gracious contributions to the series and value you tremendously as a partner.
For more information the Innisfil Kart Club and the Canadian Karting Challenge, email racing@innisfilindy.com, call 905-775-4686 or visit www.canadiankartingchallenge.com.
tags: 2017 CANADIAN KARTING CHALLENGE Innisfil Kart Club
previous STRONG SHOWING FOR TRACKSIDE KARTING SERVICES AT TEXAS PROKART CHALLENGE
next PSL KARTING: 18 DRIVERS READY FOR NEW JERSEY