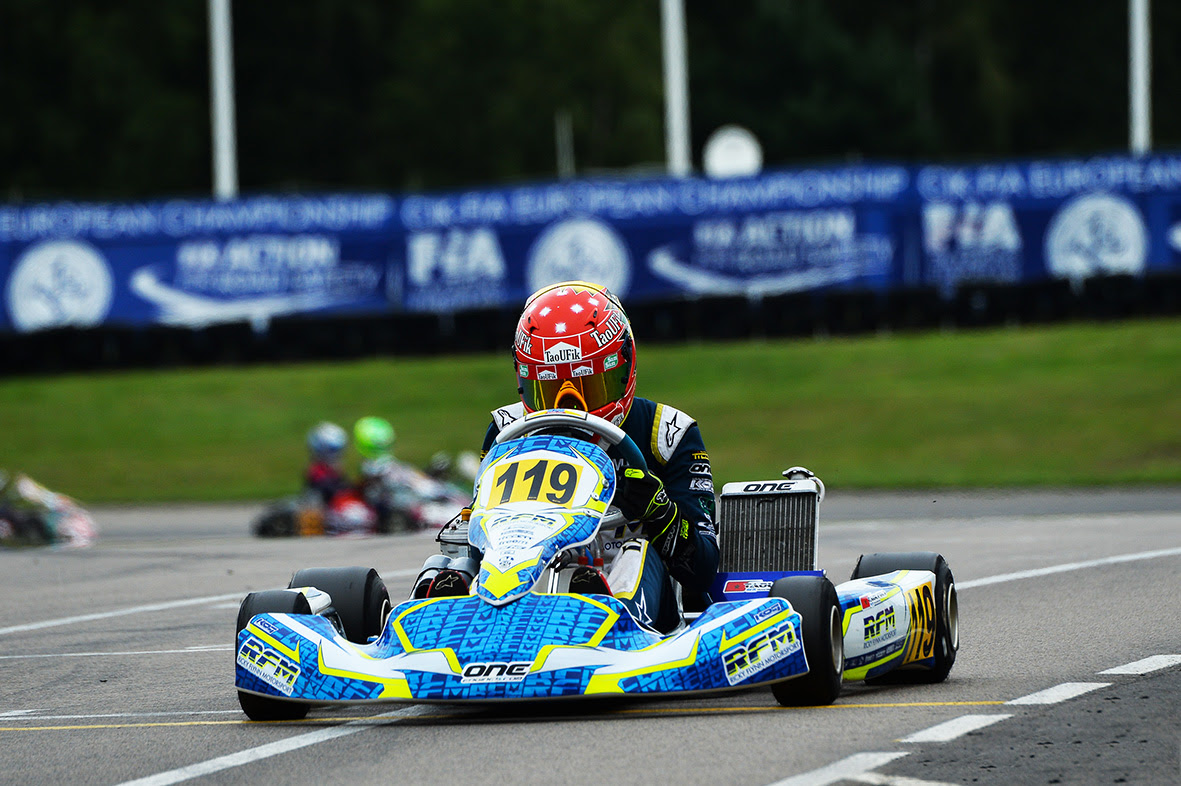 The new CIK-FIA Champions on top in Europe.
The race for the CIK-FIA European titles ended in Kristianstad (S) last weekend. It was like a seventh appointment on the CIK-FIA calendar after the six rounds which took place all around Europe. The new European Champions, who secured their titles only in the last stages of the Finals in Sweden, can now celebrate their victories. The CIK-FIA paddock is now getting ready for the forthcoming World Championship. The two World Championship events are reserved to the OK, OK Junior and KZ categories, while KZ2 will take part in the International Super Cup. The outcome of the European competition can be helpful to make predictions about the frontrunners of the two World Championship appointments of Wackersdorf (D) – KZ and KZ2 – and Brandon (GB) – OK and OK Junior.

A landmark victory in ok for Sami Taoufik.
Sami Taoufik (FA Kart-Vortex-LeCont, in the photo on top), at his debut in OK, brought a CIK-FIA European title to his country – Morocco – for the first time. He was crowned 2017 European Champion in Kristianstad thanks to a fundamental win achieved in the previous weekend in Alaharma (FIN), a result who sent him directly to the top of the standings from the 7th place. In the Swedish round, the Spanish Pedro Hiltbrand and David Vidales (both on Tony Kart-Vortex) did not manage to attack the Ricky Flynn Motorsport’s driver from the 2nd and 3rd position they occupied in the standings. Taoufik, eventually, placed 4th and secured the title with his 80 points. The Russian Pavel Bulantsev (Tony Kart-Vortex), very consistent in the Scandinavian riunds, achieved a good recovery and he is the Championship runner-up with 67 points. Third position, only one point behind Bulantsev, for the Italian Lorenzo Travisanutto (Zanardi-Parilla), who gained a convincing victory in the 3rdround of Le Mans. Good race in Kristianstad also for the Polish Karol Basz (Kosmic-Vortex), who placed 4th with 63 points thanks to his second position in the Final, and for the English Finlay Kenneally (Tony Kart-Vortex), who won the race and grabbed a final 5th place with 60 points, the same amount of points scored by Hiltbrand. The other winners of a Championship round were Hiltbrand and French Theo Pourchaire (Kosmic-Vortex). 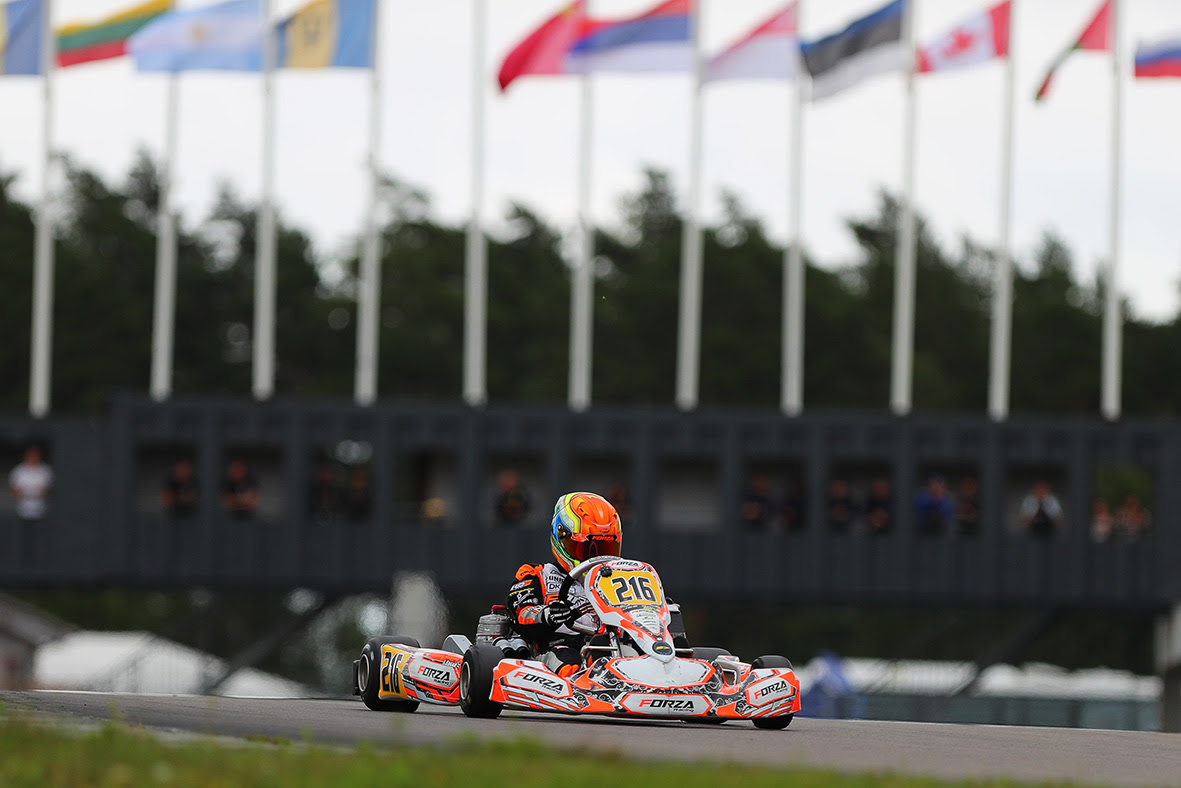 In OK Junior, the opponents of Jonny Edgar (Exprit-TM-Vega, in the photo above) tried until the end of the competition to close the gap with the Englishman in the race for the title: the driver of the Forza Racing team gained the leadership after his victory in the season-opener in Sarno (ITA) and then he kept at bay rivals such as the Italian Mattia Michelotto, the German O’neill Muth (both on Zanardi-Parilla) and the Australian Jack Doohan (FA Kart-Vortex): they all managed to win once in the five Championship’s rounds but Edgar was consistent throughout the whole competition and he even succeeded in Alaharma. The Brit, on the day of Doohan’s success in the Final in Sweden, secured the title with 113 points. Another English driver, Harry Thompson (FA Kart-Vortex), scored several podium positions and with 99 points placed second, even though he never won a round. Behind Doohan, who finished with an excellent third position with 71 points, another top driver: the French Hadrien David (Zanardi-Parilla), fourth with 67 points. Thanks to his victory in Le Mans, Muth placed fifth in the Championship, even though the English Christopher Lulham (Tony Kart-Parilla) reached him in the standings. Kristianstad brings good luck to the Italian Paolo De Conto (CRG-TM-Bridgestone,above): after the World KZ Championship won in Sweden last year, here he celebrates a new European title. De Conto arrived at the Asum Ring as the dominator of the category, after he won all the three previous KZ rounds. In the final sprint for the remaining podium positions, the Czech Patrik Hajek (Kosmic-Vortex) managed to win the Final. Hajek, who scored 80 points against the 100 points gathered by De Conto, made his second position in the Championship steadier and fended off the attack of the Dutch Marijn Kremers (BirelArt-TM), who remained third with 74 points. Only the Dutch Bas Lammers  (Sodi-TM) managed to gain positions in the final standings: he placed fourth in the Championship thanks to the second place achieved in the Final of Kristianstad. Lammers’s result pushed his fellow countryman Stan Pex (CRG-TM) back to the fifth position with 59 points, at the end of a rather unlucky Final for him. Köhler is the new king in KZ2.

It was a rather eventful KZ2: the German Leon Köhler (Tony Kart-Vortex-Bridgestone, above) won the European title when all seemed lost. The initial supremacy of the Italian Matteo Viganò (Tony Kart-Vortex) – he won the season-opener in Genk (B) – was jeopardized by the result of the second round in Le Mans, where he missed a victory which seemed certain. So, Köhler managed to take leadership over, closely pursued by the Italian Paolo Ippolito (Lenzo Kart-LKE), in the wake of his success in the Final in France. In Kristianstad, in the Final won by the French Adrien Renaudin (Sodi-TM), none of the top drivers confirmed their previous results and the first positions of the standings didn’t change. Köhler won the title with 47 points; second position for Ippolito who placed ahead of his fellow countryman Alex Irlando (Sodi-TM) with both the driver at 42 points. A final standings with very narrow gaps, with Viganò fourth for only one point, while the French Tom Leuillet (Sodi-TM) placed fifth with 39.