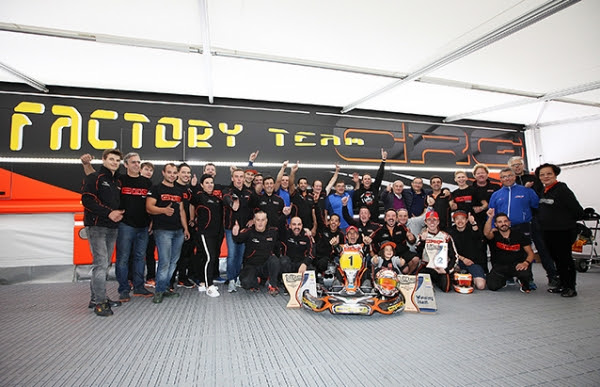 Paolo De Conto secured the second KZ world title in a row on CRG-Tm in the World Championship held in Germany, 40th for CRG. CRG close to the big target also in KZ2 with Benjamin Tornqvist Persson in the International Super Cup.

The CIK-FIA KZ World Championship in Wackersdorf ended with another great win for CRG, that secured its 40th title with Paolo De Conto, who won his second world title in a row after, the one taken last year in Sweden, also on CRG-Tm.

In reality, CRG was very close to scoring another double win in Germany, as happened last year in Sweden, when Paolo De Conto was crowned 2016 KZ World Champion and Pedro Hiltbrand won with CRG the International KZ2 Super Cup. This time around, in Wackersdorf (Germany) another double win was at reach in KZ2 with the Dutch driver Benjamin Tornqvist Persson, who has been leading the Final until the last corner, but in this occasion CRG Holland’s driver had to settle for P2, as he was pipped by Alex Irlando in the sprint to the line.

CRG once again has been competitive and charging for the victory in both categories. Things went down to the wire in KZ2, while Paolo De Conto had the upper hand on his rivals recovering from P14 in qualifying, result that he had converted into P4 after the heats. De Conto therefore deservedly claimed another KZ World Championship, after winning the KZ European Championship in Kristianstad last July 30th. Amazing Paolo De Conto! He has been already crowned World Champion two times and European Champion three times.

In KZ, Jorrit Pex has also been shining in Wackersdorf completing a recovery up to the final fourth place, after holding a podium position for several laps. Stan Pex also run a strong race, ending eighth after an incident in the closing heat on Sunday morning penalized his starting position in the final. Andrea Dalè (Nuova 3M) also put in a solid performance ending 13th, while Flavio Camponeschi lost a few positions crossing the finish line in 16th position. Alessandro Giardelli run a strong race showing all his grit the first year in the category, ending the World Championship in 21st place. Macau’s driver Wing Chung Chang run a positive race ending 24th. Fabian Federer (SRP) has always been among the protagonists, but ended his Final on the first lap due to an incident with Lammers.

An ecstatic Paolo De Conto commented his victory in KZ in this way: “This second KZ World Championship has been quite different from last year. This time around I did not put in a good lap in qualifying and I started heats from the fourth row. I had to take a lot of risks to get some ground back, but I managed to clinch the second row of the grid for the Final, a position that allowed me to fight for the win. We did an amazing job. I would like to thank CRG, starting from Giancarlo Tinini, the whole family and all the guys back at the factory, my mechanic Omar who did an exceptional work and, finally, my family and friends. This has been a difficult team victory, I also want to thank TM for the great job done that allowed us to be in front and take the win. This year CRG and I secured also the victory of the KZ European Championship, it has been a great season. I could not wish for more. Now we start working for the next season, aiming to score some other great results with CRG.”