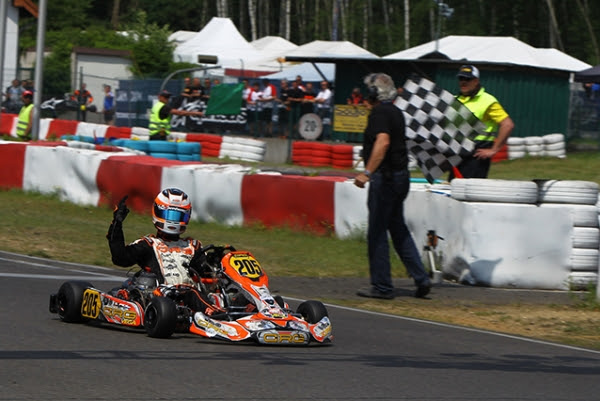 Stan Pex took a double win in the second round of DKM in Kerpen (Germany) and became the new KZ2 classification leader, Dennis Hauger won OK and Kas Haverkort OK-Junior.

CRG put in another strong performance at the second round of the DKM held in Kerpen after the opener of Ampfing. Stan Pex claimed a stunning double win in KZ, Dennis Hauger took his maiden win in OK and CRG Keijzer Racing’s Kas Haverkort secured a good victory in OK-Junior, category that is now led by CRG TB Racing Team’s Niels Troger.

Stan Pex run a perfect weekend on CRG-Tm in Kerpen. He won both KZ2 Finals and this result, added to the victory of Ampfing’s Race-2 placed the Dutch driver of CRG on top of the championship standings. Things did not go well this time for Flavio Camponeschi, who was on track with CRG Deutschland. The winner Ampfing’s Race-1 endured in fact a technical problem slowing him down in the first final before forcing him to the retirement from Race-2.

Moritz Horn on CRG-Tm run by CRG TB Racing Team was the quickest of the CRG lot in KZ2 Cup, as he closed both Finals on the podium, taking a great second place in Race-1 and a third in Race-2. His team mate Dennis Krampalso run a solid weekend coming fourth in Race-2. Jeroen Bos was fifth in Race-1 and sixth in Race-2 instead. Horn is currently fourth in the classification, while Bos is fifth.

OK provided a further confirmation of the speed of another great protagonist,Dennis Hauger, who claimed his maiden win in the category in the debut year, after winning last year the OK-Junior DKM. Hauger has been particularly competitive in both Finals held in Kerpen. In Race-1 he fought for the victory but could not find a way past his main rival David Schumacher in the sprint to the line. The CRG driver soon counter-charged winning Final-2, despite a slow start due to a misunderstanding at the getaway when the traffic light seemed to fail. Hauger closed lap one in fifth place, but then recovered all the way to take a fair victory.

Among the main protagonists of OK, Glenn Van Berlo of CRG Keijzer was fourth in Race-1, while CRG TB Racing Team’s Tim Troger was fourth in Race-2. Wodan Erik Munding has also been very competitive on the new Kalì-Kart, taking two fifth places. Michael Rosina was also among the quickest and ended Race-1 in eighth place.

CRG TO THE FORE IN OK-JUNIOR

OK-Junior has been a spectacular parade of CRG drivers at the finish line. In Race-1, Michelotto had the best on Zanardi as he proceeded Kas Haverkortof CRG Keijzer Racing at the sprint to the line, while CRG TB Racing Team’sNiels Troger was third, Donar Nils Munding fourth on Kalì-Kart run by Stern Motorsport, Davids Trefilovs of RL-Competition fifth, CRG Keijzer Racing’sPietro Delli Guanti sixth and JN Motorsport’s Benjamin Frislung seventh.Hugo Sasse also closed within the top ten with CRG TB Racing Team in tenth place. CRG continued its domination in Race-2 with the victory going toHaverkort from Troger to Michelotto, who completed the podium in third place. Munding was fifth, Sasse seventh and Frislund eighth. Luca Giardellitaking two twenty-first places.

All results are available at www.kart-dm.de/en/home/