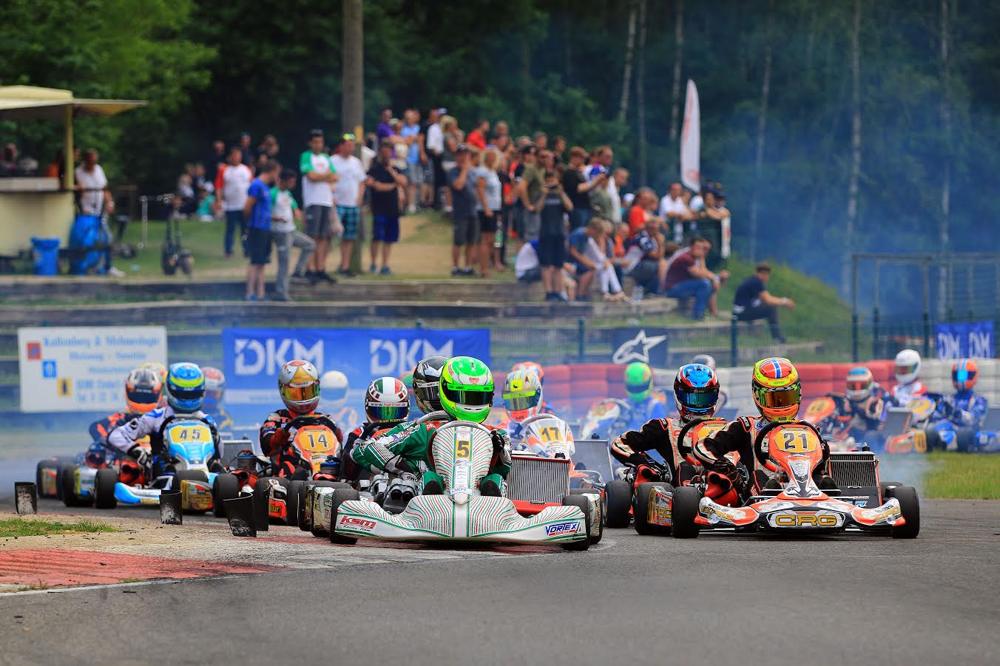 The participants of the German Kart Championship experienced a cauldron last weekend (May 26th – 28th) on the Erftlandring in Kerpen. Beaming sunshine and high temperatures demanded 100% from the drivers and teams. On Sunday evening there were several new winners and additional excitement regarding the fight for the titles.

A few weeks after the kick-off to the German Kart Championship in Ampfing, things continued in North Rhine-Westphalia. The 1.107m long Erftlandring in Kerpen was the location this time. The racetrack on which Formula 1 record Champion Michael Schumacher and DKM-patron Sebastian Vettel already started their motorsports careers is an inherent part of the German Kart Championship and was a great location again this time.

The fields of participants of the four grade series DKM, DJKM, DSKM and DSKC were completely filled up. All in all, 153 drivers from more than 20 nations started and showed thrilling races in high temperatures. In the evening the winners were David Detmers (DSKC), Stan Pex (DSKM), Mattia Michelotto, Kas Haverkort (beide DJKM) as well as David Schumacher and Dennis Hauger (both DKM).

The best scenes from Kerpen are going to be summed up in a 30-minute highlight-magazine again and can be viewed on the German automobile-, engine- and motorsports-channel MOTORVISION TV on June 11th at 3:40pm. All races can be viewed in full afterwards on www.kart-dm.de too. All in all, eight track-, three onboard- and two portable cameras captured the events of the racing weekend in Kerpen in HD-quality.

33 shifterkart-drivers started at the DMSB Shifterkart Cup and partially experienced dramatic races. Austrian David Detmers (MSR Motorsport WST-Power) already showed his great condition during qualifying. With a razor-thin advance he prevailed over his opponents and was unstoppable during the following heats as well. One victory and a third place were enough to defend his pole position.

During the final races he seamlessly tied in with his performance of the previous day. Detmers achieved a perfect start into the 23 laps and celebrated an undefeated start-finish-victory. During the final third of the race the driver on second place, Moritz Horn (CRG TB Racing Team) came considerably closer but Detmers counterattacked. Behind the two leading drivers Tobias Mähler (Kartshop Ampfing) fought his way forward to the top three. Paul-Jeremy Voegeding (KKC Racing) and Jeroen Bos (CRG Holland) completed the cup ranks on fourth and fifth places. Unlucky driver of the race was Julian Müller, who had previously led the overall list of rankings – while being on the secure second place he had to drop out of the race prematurely due to a technical problem.

After his success at the first race, the competition couldn’t match Detmers’ pace during the second either. During a clever race, he fought off all attacks of his opponents and achieved the double success. “This was a perfect weekend for me and my team. Things already went really well during qualifying and I utilized these possibilities during the races as well. I’d like to thank my team and our engine partner.” Next to him, Tobias Mähler had the best chances of winning: With new tires, the Sodi-driver was temporarily considerably faster than the leading driver, couldn’t find a way past him though and came in second. Third driver Horn kept close the entire race and thereby ended up among the top three for the second time this weekend. Dennis Kramp (CRG Keijzer Racing) achieved fourth place in front of Lucas Speck.

Kevin Pieruszek (KSW BirelART Austria Racing Team) caused a surprise during qualifying. Due to a perfect lap he took the lead of the high-class field of participants. He fell back a little during the heats though and freed the way for Jeremy Iglesias (Formula K Racing Team): The Frenchman took the lead after the heats and didn’t give it up during the starting phase of the first final race as well. Behind him was the current leader of the Championship Flavio Camponeschi (CRG Germany). Both of them drove away from the main field and wanted to achieve victory. But an accident during the eighth lap caused a race break. After 30 minutes the race was continued. Initially Camponeschi took the leading position, but Stan Pex (CRG Holland) came racing from behind. The Dutchman celebrated his second consecutive victory of the season then. Rick Dreezen (KSW BirelART Austria Racing Team) was on the secure second place. The three-time German Champion had to deal with a technical defect during the last bend though and only crossed the finish-line on tenth place. Iglesias inherited his position in front of Fabian Federer (SRP Racing Team), Jorrit Pex (CRG Holland) and Camponeschi.

After the exciting first race, the positions were clear quite quickly during the second race. The youngest Pex driver defended his leading position and gathered a comfortable advance. The last five laps were especially exciting again then. An additional race break diminished the advance of the leading driver. Things at the front didn’t change throughout a sprint over the last five laps though. Stan Pex won in front of German driver Andre Matisic (Solgat Motorsport) and his brother Jorrit Pex (CRG Holland). Leon Köhler (KSM Schumacher Racing Team) came in on the strong fourth place in front of Dreezen. Flavio Camponeschi and Daniel Stell (Mach1 Motorsport) had to deal with setbacks. Both were among the top five and then had to drop out of the race during the re-start. Double winner Stan Pex was in the best mood though: “I’m very content with my performance today. I already noticed early during the first race that my kart’s balance is right. I was able to tie in with this today”, the winner explained.

DJKM: Michelotto and Haverkort celebrate first victory of the season

The junior class is very balanced again this year with four winners in four races. Kas Haverkort (CRG Keijzer Racing) already proved his ambitions during qualifying. After a difficult weekend in Ampfing he now secured the pole position and didn’t let go of it after two victories at the heats.

On Sunday the Dutchman continued his strong performance during the first final race then. Haverkort won the start and held his ground on the first position over long stretches. His pursuers Mattia Michelotto (Chiesa Corse) and Niels Tröger (CRG TB Racing Team) couldn’t be shaken off so easily though and stayed in the CRG driver’s wind shadow. Shortly before crossing the finish-line, the Italian Michelotto used his chance, drove past Haverkort and won. Tröger followed on third place as best German driver. The race was less eventful for the fourth and fifth winners. Donar Nils Munding (Kali-Kart Stern Motorsport) and Davids Trefilovs (RL-Competition.com) secured their positions early on and completed the cup ranks.

The youngsters then caused excitement during the second race in the afternoon. During the course of the 18 laps the numerous spectators on the terraces saw three different leading drivers – Tröger, Michelotto and Haverkort switched positions at the front. The trio showed a thrilling fight for victory until the last lap. The decision was only made shortly before crossing the finish line – Michelotto went for broke with an attack on Haverkort. The Italian was out in his estimation a little though and slid into the off. Haverkort then safely drove towards victory. German Niels Tröger came in second in front of Michelotto. Unimpressed by the show at the front, Etienne Linty (EMILIA Kart) and Munding experienced a calm race on places four and five. Winner Kas Haverkort was very happy at the finish line: “After my bad luck in Ampfing I now showed our potential here and am in the fight for the Championship again.” Everything is still possible before the half-time race – the first three drivers are only 14 points apart.

Local driver Luke Füngeling (JS Evolution) used all of his experience on the 1.107m long Erftlandring during qualifying and achieved his first pole position at the German Kart Championship. During the heats he then had to make way for David Schumacher (KSM Schumacher Racing Team) though. The overall leading driver won both rounds and thereby lived up to his role as a favorite.

Schumacher didn’t give up his third consecutive DKM-victory of the season at the first final race as well. It was a lot of work though. After a great start the Tony Kart-driver achieved a small advance on his opponents and wasn’t impressed by the fights between his pursuers. Towards the middle of the race his team mate Felix Arnold (KSM Schumacher Racing Team) came close though and temporarily even took the lead. Schumacher stayed close though and fought his way back. Meanwhile Arnold lost another place and was third behind Glenn van Berlo (CRG Keijzer Racing).The Dutchman then drove towards the front of the field, but didn’t get a chance to attack in the end. Dennis Hauger (CRG Holland) came racing from behind as well. After the start the reigning Junior Champion was on fourth place but fell back to tenth place due to a collision. Instead of losing his rhythm, the Norwegian fully attacked and finally came in second behind Schumacher. Third place went to Arnold in front of van Berlo and Wodan Erik Munding (Kali-Kart Stern Motorsport).

After his success at the kick-off race, Schumacher led the field during the starting phase of the second race as well. This time he had to succumb to his opponents’ attacks though and fell back to eighth place until crossing the finish line. Several drivers fought for victory. Reigning Junior Champion Dennis Hauger had the best chances. Even though he lost a couple of places on the first few meters, he fought his way back and crossed the finish line as the rejoicing winner. Arnold came in second in front of Swedish Rasmus Lindh (KSW BirelART Austria Racing Team). Tröger followed on fourth place in front of Munding on fifth. Despite the mixed second race overall leader David Schumacher summed things up positively in the evening: “It wasn’t an easy weekend for us. The victory at the first race was a lot of work. In the end the effort paid off though. I collected important points and strengthened my lead in the championship.”

The participants of the German Kart Championship are going to start again at the beginning of July in Wackersdorf. The half-time champions are going to be chosen from July 7th-9th at the Prokart Raceland.