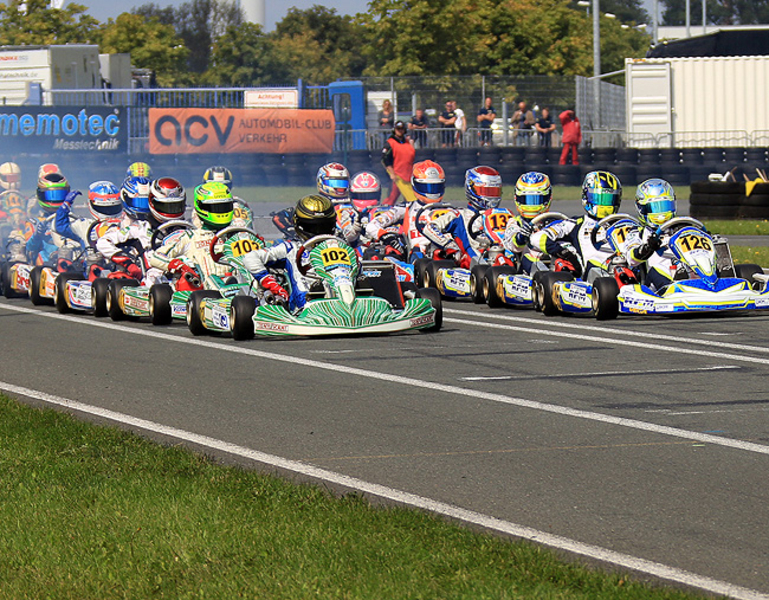 Second to last event of the season in the Magdeburger Boerde

The German Kart Championship is going to enter the final phase at the etropolis Motorsport Arena Oschersleben. Until now the three grade series DKM, DJKM and DSKM have presented themselves in a balanced way and can therefore guarantee close racing decisions. More than 100 drivers from over 20 nations are going to start next weekend.

Last year, the 1.018m long race track in the Magdeburger Boerde celebrated its return to the DKM calendar and provided exciting kart racing. This is also guaranteed this year. Until now the races went very evenly and there are no clear favorites yet in the three grade series. The overall lists of rankings are currently led by Martijn van Leeuwen (DKM), Bent Viscaal (DJKM) and Davidé Fore (DSKM).

The etropolis Arena Oschersleben belongs to the high speed tracks of the racing calendar and is popular among the drivers and teams especially due to the proximity to the automobile race track. “Oschersleben is the fastest track on the DKM racing calendar. On the long straight passage you need engine power and wind shadow. Without those it’s hard to overtake anyone”, says BirelART-factory driver Marijn Kremers.

In the top class of German kart racing two Dutchmen are currently dominating the events at the front. Martijn van Leeuwen (CRG Keijzer Racing Team) and Richard Verschoor (RB Racing) each won three races and were on the winners’ podium after all ranked races. After the last event in Ampfing, reigning champion Martijn van Leeuwen took the overall lead and is going to travel to Saxony-Anhalt with an advance of 13 points to his fellow countryman. “We worked really hard before the races in Ampfing and were rewarded for it. We can’t rest now though – Richard is still really close”, says van Leeuwen. The opponents are very close together as well: Christian Soerensen (Storm Development) from Denmark entered the top three in Ampfing. Only six points behind follows another Dane, Julias Lassen (TK Racing), on fourth place. The top five are completed by best German driver Tom Lautenschlager (TB Motorsport Racing Team).

The youngest drivers of the German Kart Championship are holding off the title decision until the very end. Dutchman Bent Viscaal (KSM Racing Team) has the best chances as the leading driver, but he has to look out for his pursuers. Max Hesse (RS Motorsport) is still really close: Despite numerous places on the podium Hesse is still waiting for his first victory in the German Junior Kart Championship and is going to give it his all again in Oschersleben to achieve the jump to the front. Third driver Emil Dose (Storm Development) already celebrated two season victories. After a lot of bad luck at the season kick-off in Wackersdorf, the Dane improved his performance continuously during his premiere season and is already on third place. “After my victory in Ampfing I know that we are competitive and am really looking forward to an exciting second half of the season”, Dose said in his winner’s interview. The next German driver, David Brinkmann (KSM Racing Team), is closely behind on fourth place. Dutchman Max Tubbben completes the top five.

The shifterkarts are more exciting than ever. During the first six ranked races there were five different winners. After half-time, the overall list of rankings is currently being led by multiple Kart World- and European Champion Davide Foré (Renda Motorsport). Due to a double victory in Ampfing and cup ranks in Genk the Italian is keeping his younger competition at bay and has great chances of winning the German Championship for the first time. “It’s the first year that I’m driving all the DSKM races and now want to make use of this chance”, the Italian says looking forward to the next races. His competition wants to prevent this though, most of all Jorrit Pex (Pex Racing Team). The reigning four-time champion only gained 27 championship points in Ampfing and fell back to second place. Alexander Schmitz (KSM Racing Team) is really close as well – the best German driver is currently on third place. Places four and five are shared by Wackersdorf-race winners Menno Paauwe (Paauwer Kart Racing) and Maik Siebecke (SRP Racing Team).

The event in Oschersleben is already going to start on Friday. During the free trainings the drivers can get used to the track. On Saturday morning things are going to get serious during qualifying. The best 34 drivers of the heats are going to start at the overall six final races on Sunday. Everyone who cannot be present in Oschersleben can look forward to more than 16 hours of live images again.